I'm the first one to admit it -- my maternal instinct was installed with faulty wiring. I was never one of those girls who imagined the day she'd become a mother, and I suppose I haven't yet become one. Over the years I've vacillated about whether or not to have kids, and I've recently come to the realization that it's not what I want for myself.

And people have a hard time understanding that. They can't quite comprehend a woman who would be choosing to be without something that we've all been trained to want. Here are some questions that people have asked me about my childless friends who don't have kids (and I can only assume have been asked about me):

When people find out that I don't have kids, the response I get is mostly pity followed by reassurance -- reasons I should hold off on blowing my spinster-brains out. When one extraordinarily pregnant woman found out that I was without child, pity began to drip off her like honey. She cocked her head to the side, raised her eyebrows and made this terribly sad scrunchy face. "Don't worry," she consoled. "A few years ago I hadn't even met my husband yet, and now look at me!" OK Preggo, take it easy.

Did I assume that you backed your way into your life by getting pregnant by accident? Did I project all of my deepest fears onto you and tell you not to worry because in 18 years you'll be free? Please don't assume that my unmarried status and empty womb are causes for concern -- colossal screw-ups and/or fate's cruel hand at work. They're conscious choices. I haven't simply been aimlessly wandering through life, letting unexpected detours make life choices for me.

OK, there's been a little bit of aimless wandering and letting unexpected detours make some life choices for me. I wandered a lot in my 20s. Of course circumstances have played a role in it, but there's also been a lot of thought and a lot of conscious choice involved here as well. 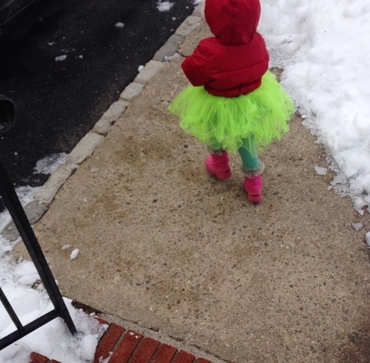 I love kids. As a nanny, I get to see some really cool stuff. I get to watch as these kids see things for the first time and then help them as they grapple with complex issues from inside their mini-brains. Kids teach me about resilience and curiosity and staying present in each day. There is no better feeling in the world than when my 2-year-old charge comes running across the ballet studio and jumps into my arms, absolutely giddy with glee to show me the dinosaur stamps that her teacher just gave her. Kids make me feel loved and needed and fulfilled.

But they are also perfect tyrants. Little ids running around with dripping noses who want every need satisfied immediately and who have no idea how much work they are. They don't understand how lucky they are to take naps, they don't repay you any of the money that they cost you, and the only time they want to do anything for themselves is when you're running late. And on a personal note, kids of all ages and genders have always felt entitled to grab my boobs at will. All of which is child's play compared to the kind of psychological warfare that they engage in as they get older. Anyone who says that kids don't take all the strength and patience you can muster to do an endless and thankless job -- well, either they're lying or they have nannies around the clock.

And since we're talking honestly here, let's talk about sex. As any good red-blooded American woman, I have some deep-seated issues about my worth as it relates to my body and my desirability. The temptress-quotient I call it, the roots of which are complicated and often opaque, but suffice it to say it is a deeply embedded issue that's about a lot more than just fitting into my skinny jeans. It's about what I've seen happen to relationships and what I've witnessed people doing in pursuit of missing pleasure. It's about examples that have been set for me as well as experiences of my own. It's about how things change over time in ways you can't even imagine, and about all the pieces of self that I've watched many women put away after having kids. It's about the fears that are activated by the thought of what motherhood would do to my entire sense of personhood. And, of course, it's about fitting into my skinny jeans.

It comes down to a few simple questions: Am I up for the job of being responsible for another human being? Have I become everything I need to be for myself in order to be a good parent? Am I capable of giving a child everything she deserves? And quite simply -- do I want all that responsibility?

Let me be clear about something -- I'm not saying that my reasoning is necessarily sound. I'm not saying that you can't be a temptress once you become a mom (I know plenty of smokin'-hot mothers), or that I won't wake up 10 years from now and regret not experiencing something as profound as motherhood. I don't even know that I won't wake up tomorrow and decide my life won't be complete without having a child. My reasons might be selfish and vain and drenched in fear, but they're my reasons, and I've spent a great deal of time trying to understand them. Just because being a mother is a role you can't imagine not playing, doesn't mean that the only reason I'm not playing it is because I blew the auditions.

Life hasn't just happened to me. It never does.

So let's make a deal, Preggo. Let's not exchange condolences about the lives that we've chosen for ourselves. Let's assume that we're both exactly where we want to be.

Writer. Seeker. Smart-ass. Blogger at Sum of My Pieces.