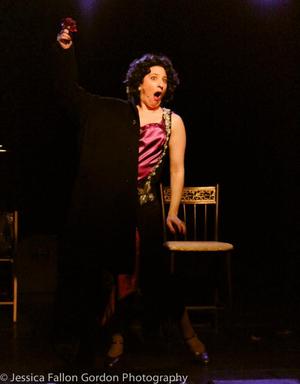 "You are born whoever you are," says Kimberly Faye Greenberg, "And I'm a broad."

The actress and singer is speaking these words onstage at 54 Below as part of Fabulous Fanny, a solo show featuring Greenberg as iconic comedienne Fanny Brice, but it turns out they are just as representative of the artist as of her subject. Offstage, Kimberly and I bond over our shared obsession for the 1920s, and instantly I know -- this gal's going to be fun.

Greenberg is the first actress ever to star in two Off-Broadway musicals at the same time, having spent nearly a year zipping back and forth between the roles of Brice in an earlier solo piece, One Night with Fanny Brice, and composer Sylvia Fine in Danny and Sylvia: The Danny Kaye Musical. It seems Kimberly was destined to play bold, brassy, determined ladies of the twentieth century - -women who defied the odds of class, ethnicity and appearance to get exactly where they wanted to go.

Most of us are encouraged to "think outside the box," but Greenberg's found her greatest successes from diving headfirst into her theatrical niche of historical ladies. Her affinity for Brice began in high school with Funny Girl, the musical based on the star's tumultuous romance with criminal Nick Arnstein, when a teacher informed Kimberly that she resembled Brice and should study to play her part in the show. Though she still has yet to work on Funny Girl, Greenberg became a dedicated student of all things Fanny, researching the performer's life for years before Chip Deffaa, the writer of One Night..., approached her with his script.

When I do something I become engrossed in it, so I started learning everything about Fanny. Funny Girl was the big instigator, but then the universe sort of conspired, because I ended up playing Sylvia Fine -- not the same person really, but of a similar build and character, and then [Deffaa] saw me in that and asked me, 'Will you workshop my Fanny Brice show?' Fanny just kept coming back to me threefold; she was shining down and the world opened up.

Watching Kimberly cavort around the stage in Fabulous Fanny, you do get the sense of being thrust back in time. She is as nimble and rubber-faced as Brice in her prime, executing a montage of physical numbers like "Sadie Salome" and "I'm an Indian" with gleeful ease and tossing off joke after joke. It's more than a cabaret in that Greenberg gives you a complete story arc to follow, radiating with such warm, homey intimacy that even newcomers to Brice's canon will leave feeling like experts.

54 Below provides a perfect venue for such a show; its speakeasy-like atmosphere contributes to the impression of having been transported to a 1920s supper club for an evening's entertainment by a famous chanteuse. In fact, until true time travel becomes possible, Kimberly's act is the closest modern audiences will ever come to seeing Fanny in person.

A true team effort, Fabulous Fanny is written by Greenberg with additional material by director Brian Childers, her former Danny and Sylvia costar, and a dedicated supporting team consisting of musical director/arranger Jeff Biering, choreographer Justin Boccitto (who also choreographed One Night...), and pianist Julianne B. Merrill. "For me collaboration is key," Greenberg notes. "We operate so well together that we've been able to create something completely new."

In other words, if you think Fabulous Fanny is just a rehash of One Night..., think again.

The Off-Broadway show was more like a Wikipedia of facts about Fanny's life. Completely legitimate thing, but when I created this show I really wanted it to be about her emotional journey. What you can take away from this show is, 'Look at Fanny's influence over the world as a whole.' She was the first torch singer, the first Jewish comedienne, the first anything and everything like her. People don't realize it, but her legacy still lives on in show business. We've still got homages to her.

It's this sensory focus on Brice that makes Fabulous Fanny a truly unique experience. The inclusion near the end of the show of a few songs from Funny Girl (and tracks on Greenberg's companion CD from Ghostlight, the Broadway-bound musical in which she also plays Fanny) drives home the idea that this is not merely "the best of Brice," but everyone's Brice, Fanny reimagined in a superb transformation as the gal pal we wish we had. 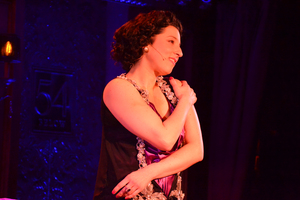 Greenberg as Brice at 54 Below; photo credit: Samantha Mercado-Tudda

Something magical happens when an actor inhabits a historical figure as peerlessly as Kimberly does Fanny -- the undertaking creates a third character who exists between reality and fantasy, a person based not on what we recall from life or movies, but someone who lives fully in the short space built onstage for the hour or so we learn about her. In Fabulous Fanny the discoveries are as surprising as they are touching. I realize, for instance, just how much the indomitable Brice depended on and sacrificed for the influential men that surrounded her: Florenz Ziegfeld, Nick Arnstein, Billy Rose, Irving Berlin. The sequence of Fanny marking time through Arnstein's first marriage and incarceration ("I'd Rather Be Blue Over You Than Be Happy With Somebody Else") is deeply affecting, an accurate portrayal of the mixed emotions involved when the wait for true love runs torturously long.

But it's in performing Brice's signature tune, "My Man," that Greenberg hits her heartfelt crescendo (I espied most of 54 Below's audience tearing up). During this number Fanny's comic mask finally slips, revealing the intense pain she's had to endure despite her talent and energetic attitude. This, Kimberly admits, is her own favorite moment in the show: "It's the eleven o'clock number where everything shifts. It's a more honest Fanny versus the happy-go-lucky Fanny, which is not necessarily who she was."

Beyond this glimpse into a frank, unvarnished Brice, Greenberg's performance also enables her to connect with a deeper part of herself.

The weirdest thing about this show is that it made me realize who I am. I was always really shy, but now I'm not so afraid of things, and I think it's because of playing Fanny in a show where it's just me. Because of her and her chutzpah, I'm a better person.

And as Greenberg continues to move through her various historical women - she'll be portraying playwright Lillian Hellman, socialite Kathleen Kennedy and Marguerite Taylor (daughter of Laurette) in a series of plays from Beautiful Soup Theater this May -- she constantly unearths more treasures inside herself, proof that "knowing thy specialty" is both a professional and personal blessing.

"I always tell people, 'Don't worry about getting pigeonholed in something,'" Kimberly asserts. "As you find your niche, people appreciate more of what you've got to offer and it expands your scope of opportunity."

Of course there's plenty of opportunity still ahead for Kimberly Faye Greenberg thanks to her spirit guide Fanny, with Ghostlight in constant development, Fabulous Fanny set to tour, and her companion album of Brice songs newly released. No matter what other adventures arise (like Greenberg's recent appearance in Bookseller in the Rain, Tim Realbuto's star-studded concert tribute to Maury Yeston), Fanny survives them all.

"One of my friends works with a medium," says Greenberg, when I ask if she's ever tried to contact Brice spiritually. "And one day she said to me, 'I swear you were Fanny in a previous life.' Well, that would make perfect sense. I feel like I was just born to play her. Obviously we need each other."

Glancing around the joyful faces of the audience at 54 Below, I'd say that people who need people, especially when they're both strong, funny, and fabulous women, really are the luckiest people in the world. How very lucky for us.

You can learn more about Kimberly Faye Greenberg here, and preview her Fabulous Fanny album here.