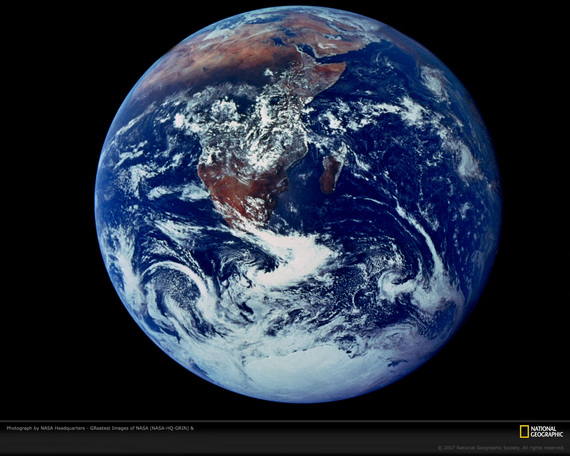 I have a confession to make. When my first grade teacher told me the earth was round, I simply didn't believe it because it did not make any sense to me. If the Earth was round, wouldn't we fall in to an abyss and wouldn't the oceans be drained? When I expressed my confusion, I don't exactly recall how my teacher responded, but it was very clear that I had asked a stupid question. Everyone seems to know that the earth was round and I was the only one who didn't know a simple fact. Since I didn't want to look like fool in front of other students, I went along with. I excelled academically, however, for a long time, much longer than I'd like to admit, I secretly believed the earth was flat.

I was told this "fact," before Apollo crew landed on the moon and the first full view photo of earth was taken from space. If the concept that the earth was round was so obvious, Bruno would not have been burnt alive and Galileo would not have been subjected to inquisition. This was the moment that I realized the importance of rote memorization when I couldn't understand concepts in order to excel on tests, and secretly hoped someday I would understand.

The Earth being round was not the only concept I didn't understand, there were many other principles, laws and theorems that I simply could not comprehend and therefore, could not accept. For example, in high school physics class, when I was told that two objects - one heavy and one light - dropped at the same time, from the same height, would hit the ground at the same time, I thought it was ridiculous! I even tried the experiment at home with a feather and a stone, and the feather never hit the ground. Of course, I memorized the correct answer, as usual, and did well in school. It took several years before I was able to truly understand why both objects hit the ground at the same time after I learned about the thought experiment that Galileo conducted. Interestingly, I never see Galileo's thought experiments discussed in textbooks, or the hammer and feather experiment conducted by astronaut David Scot on the moon.

I have been teaching students at all levels for the past 20 years and I found that most students, when forced to memorize facts, have similar misconceptions. I work with first year engineering students with high AP scores in physics, who do not understand basic principles but they can recite them word for word. There is absolutely no reason to believe that a law or a principle should be obvious to students simply because it was discovered by a scientist.

Students must fully discover these principles to comprehend them. In order to discover, they have to reinvent it themselves. This is what "Eureka" or "aha" moments are all about. But what we are doing in the traditional education system is the opposite. We tell them, "Don't Reinvent the Wheel." "Don't Reinvent the Wheel," is the most counterproductive statement for a student seeking knowledge. How can you understand something if you don't experience it yourself? Everybody learns to ride a bike but learning to balance while on a bike is a skill one must acquire themselves. Despite a teacher being present, it is a deeply individual process.

Our textbooks have become difficult to read. Our lectures are full of equations in PowerPoint presentations. We are making things more complicated and we hide behind equations and technical terms. In the name of academic rigor, we are sacrificing simplicity and clarity.

A student will ever never understand the real meaning of any principles unless they can relate to them on a personal level. For me, reading Galileo's thought experiments was enough to understand an important principle. Unfortunately, we have eliminated all relevant stories from the past from our textbooks. We must provide opportunities and create scenarios for our students to reinvent the wheel in their minds. This can be easily done only if we are willing to take a step back from complex math and technical details, give the context and provide better historical background. Let's teach more about the personal lives of those scientists and the relevance of their discoveries and challenge students to recreate those scenarios.