Eugenics has a bad reputation, and rightly so. Most of its applications throughout history have been coercive and cruel attempts by governments and groups in power to impose their pseudo-scientific ideas about "good genes" on the rest of the population. A more recent version, dubbed "liberal eugenics," involves prenatal genetic screening for heritable diseases, but even these interventions are too sinister for some, evoking the specter of "designer babies" and a Brave New World. So is every intervention in the human gene pool doomed to be met with either hand-wringing or outright condemnation? I think not.

There is a widespread and perfectly uncontroversial way that we all meddle with human genes on a regular basis, imposing our own ideas (pseudo-scientific or otherwise) on future generations. "Bedroom eugenics" isn't the nefarious plot of mad scientists or fascist bureaucrats; it's what you do when you decide whether or not to have sex with someone, potentially influencing the genetic make-up of your future children. In biology it's known as "mate choice" or "sexual selection".

The word "eugenics" literally means "good genes" but the devil has always been in the details. Good for whom, exactly? Good for what? In the old "top down" eugenics, someone in power might encourage you to breed or not to breed, or try to sterilize you or kill you, in order to influence the genes of the future. But when someone flirts with you or falls in love with you and you reject their advances, maybe because they aren't physically attractive enough, or smart enough, or tall enough, or confident enough, or talented enough (you're so picky!), this also exerts a "bottom up" influence, similar to the political phenomenon of NIMBYism. Your genes are saying to their genes: "Not in MY backyard."

The triggers of human lust and attraction have been sculpted over millions of years by evolution, and those emotions also have a eugenic agenda, an agenda designed by natural selection to seek out and secure the best possible match for your genes, to produce the best possible offspring. ("Best" in this context simply means "most likely to reproduce.") If this sounds totalitarian and unfair, there's a form of protest available to you right now: you can be less discriminating about who you sleep with. Consent to have sex with everyone and anyone, especially if they are unappealing to you, and you will be rebelling against the tyranny of your genes.

Of course, no one wants to do that. No matter how undiscriminating you already are, there are places you simply wouldn't want to go. Bedroom eugenics is uncontroversial because in most of the world we already reserve the right to choose our sex partners and spouses. Here's another uncontroversial fact: it's only possible to have sex with a small percentage of the people you meet, and it's only possible to have children with a much smaller percentage than that. These percentages are different for different people (ie movie stars, accountants, married politicians in America, married politicians in South Africa, single college students, etc), but the latter number is always smaller than the former. Once we acknowledge this situation, and take stock of what kinds of things do and don't turn us on, the power of our choices becomes very clear. And with great power comes great responsibility.

So today I'm announcing a new grass roots campaign to promote awareness of bedroom eugenics as a force for positive change. If we're going to promote (our potential children's) good genes through our sexual choices, then we have the opportunity to apply some of that influence towards the good of humankind at the same time. Think of it as a form a consumer activism, like Bono's RED clothing line or 50 Cent's Street King energy drinks. The rationale behind both is: if you're going to buy stuff, then buy stuff that helps to fight poverty or hunger. We are all consumers (to varying degrees, monks and nuns and pre-pubescents excepted) of sex partners. We flaunt our wares, they flaunt their wares, and occasionally this leads to a transaction. My campaign is designed to encourage people to make these choices more conscientiously, with a greater awareness of the long term consequences, personal, cultural, and evolutionary.

The campaign slogan is "Don't Sleep With Mean People." 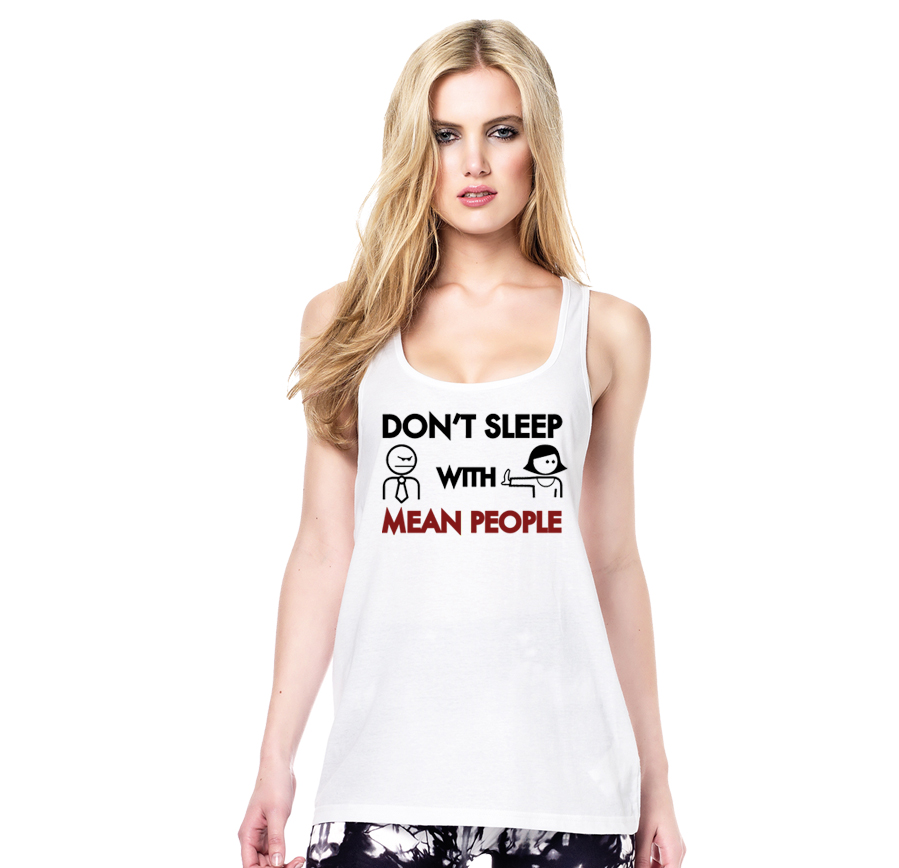 Part of the inspiration for this concept comes from the play Lysistrata by Aristophanes (c. 411 BCE), and from the Liberian "sex strike activism" of Leymah Gbowee. In both cases the courageous actions of women were the key to punishing bad behaviour in men, and this campaign takes the same approach. Darwin's theory of evolution predicts the lower-investing sex (usually males) will tend towards fiercer -- and meaner! -- competition for mates, while the higher-investing sex (usually females) will be relatively choosier and will thus wield more "selective" power. Throughout most of nature female choice is more important than male choice, and a quick survey of any nightclub will tell you that humans are no exception.

Of course, the campaigns of Lysistrata and Leymah Gbowee were directed at pressuring mean guys to act less mean, rather than influencing the genes of future generations, but the beauty of "Don't Sleep With Mean People" is that it can work on both fronts at the same time. In the short term, it will reduce the suffering in the world by punishing the perpetrators of that suffering with celibacy (a fate worse than death, some would say). And in the long term, the worst transgressors will have lower average reproductive success, promoting good genes in the most literal sense, ie "genes for goodness."

This also means the campaign can do good whether or not children are part of your agenda. Whether you're gay, career-oriented, or just find babies creepy, withholding non-reproductive sex from mean people is important too.

By encouraging everyone -- and especially heterosexual women -- to choose less-mean sex partners, we can evolve the world into a better place.

I hope you will join me in spreading the message.