One of my girlfriends and I recently visited an old cemetery in a town which is believed to be haunted. I have a fondness for the season of Halloween, and although I confess to still being afraid of the dark and, therefore, prefer to conduct my explorations at a safe and well-lit distance, I enjoy dabbling in October's offerings of spooky, freaky and frightening.

Some people consider old grave yards to be creepy. I consider them to be mostly fascinating. As my eyes scanned the cemetery that day, all I could think was, I'm standing before a multitude of stories. Each are stories I will never know, but all are equally relevant and deserving of reverence and honor, including the ones buried for hundreds of years and long forgotten.

Each marked grave is a record of a first cry and a final breath. Each body buried under the ground was once housed by the womb of a mother's love and anticipation for its birth. Each were born and became people with a collection of stories just like you and I. There were tales of love, of heartbreak, of illness, of forgiveness, of war, of victory and some left behind legacies which will continue to stretch on far into the future for many generations to come.

I thought about how cemeteries are perhaps some of the most abundant places on earth because many people often take their aspirations and undeveloped ideas to the grave with them. I likely stood before an assortment of unfinished books, undeveloped inventions, unwritten songs, unpainted canvases, unspoken apologies, unopened love letters and instance upon instance of untapped talent and potential. 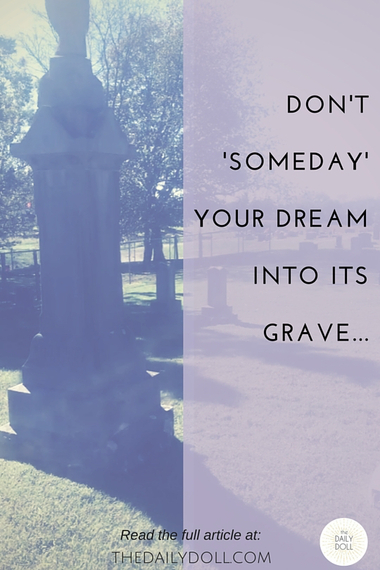 You Look So Pretty From A Safe Distance...

Since I was a child, I've enjoyed interacting with people much older than I. I've always taken great inspiration from the wisdom of people who are seasoned inhabitants of this earth. I enjoy plucking their collection of tales from their brain, discovering how each tale unfolded one-by one, and then being delighted by how all were woven together to create the story of them. It engulfs me.

I often listen with fascination and captivation, yet I have noticed a recurring theme which defies gender, personality type and cultural background: Although there are exceptions, there is almost always something unfinished every person wishes they had done. Some people have entire movies or novels worth of other lives they wish they had lived, whereas others may only have a single venture they long to go back in time and rewrite into their stories. There is always a list of legitimate reasons why a particular dream was never given life, yet rarely does anyone seem satisfied with even the most justifiable ones.

I believe the problem for the majority of dreamers often lies in the fact that most of us would rather avoid pain and discomfort at any cost. We want our prize, but never to the same degree that we are willing to endure some level of pain. We are afraid of what lies on the other side of our comfort zone; shivering at the possibilities of judgment, embarrassment and failure.

Instead of sacrificing comfort for a season or two of hardship in order to create something great, people oftentimes merely dream about the life they wish they had. They allow the beautiful thing to dangle just out of reach like an ornament on a Christmas tree. They are dazzled by the fantasy of it, keeping it nearby but at a safe enough distance, all while telling themselves and others "someday." They rarely ever dare to hold it in their hands.

I know this mentality all too well, for I was once too affected by the possibility of rejection, too much of a brat to be patient, and the comfort of merely dreaming allowed me to rest securely in my nest. There was no risk. There was no requirement for bravery, but at the same time, there was never any reward.

I recently read an essay Madonna wrote for Harper's Bazaar. She was quite revealing in the essay, discussing some of her difficulties during her first year living in New York City. It was a time in her life when fame was nothing more than a goose bump-inducing fantasy in her own mind.

During that first year, Madonna was dragged to a rooftop and raped, and her apartment was robbed three times. She had no financial security, few possessions and there were long stretches of time success seemed like a shot in the dark.

The majority of dream chasers would have returned home after having experienced such traumatic events, and understandably so. Truthfully, I'm certain I would have returned home, too. I've come to realize, though, the tenacity of those who refuse to give up regardless of the hard balls life throws at them sets the champions apart from those who are forever marked with "could have been."

Too many of us live as though we have the promise of thousands of tomorrows. We often act as though we have no expiration date at all. How many reminders do we need before we grasp that we are fragile beings? I think "someday" is one of the saddest words in the English language. It is poetically fraudulent, and I try to avoid saying it at all anymore. Oftentimes it does nothing more than set the dreamer up for "could have been." 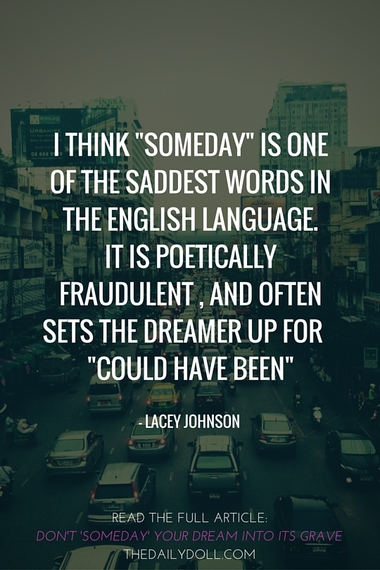 We need to replace "someday" with "right now," "as soon as possible" or "in progress." We must stop allowing our desires to dangle at a safe and glittering distance, as though they are nothing more than piece of useless jewelry. Rather, they exist because they long for us to do something with them.

We often keep our dream at arm's length and confine it to the other side of the door marked "someday." We ask that it stay near, yet we lock it out in the cold. We postpone our plans day after day, and before long, we have dug it a slow grave. Such a mindset is seductive. It creates the illusion of being in the realm of action, but it's nothing more than a death sentence to one's dream. You've got to bravely invite it in, ask it to pull up a seat and begin the work. If there is something you deeply desire to achieve, you've got to at least try.

The life you fantasize about isn't going to hunt you down, knock you over the head, tie you up and beg of you to proclaim it. It isn't going to plead with you to pursue it. It may not even come easily. But, if your desire for something continues to stir your soul despite failures, despite distractions and despite the most unpleasant of circumstances, it wants you as badly as you want it. It is calling to be given life. Stop writing its death sentence.

The original version of this article by Lacey Johnson was published on The Daily Doll.

If you enjoyed this article, you may also enjoy Don't Drink the Poison.

More:
healthy livingSuccess And Motivation
Newsletter Sign Up
An essential daily guide to achieving the good life
Subscribe to our lifestyle email.
Successfully Subscribed!
Realness delivered to your inbox