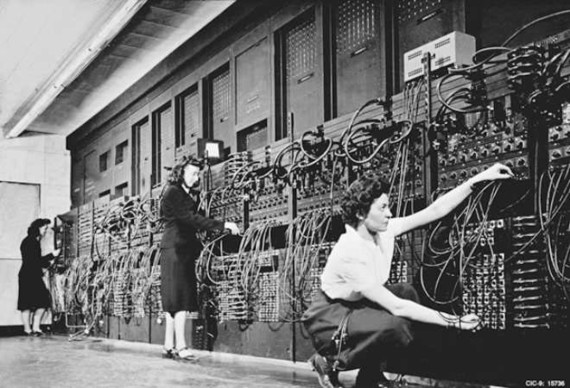 The U.S. Army built the first programmable electronic digital computer in the mid-1940s.

There were a spate of news stories last week about the temporary -- and potentially permanent -- damage the federal government shutdown did to science. With their budgets already squeezed by across-the-board sequestration cuts, federal agencies' day-to-day, science-based work ground to a halt. The Environmental Protection Agency's water quality monitoring programs, the Centers for Disease Control and Prevention's flu prevention efforts, the National Cancer Institute's new treatment clinical trials, NASA's telescope tests, and the Food and Drug Administration's safety inspections -- all closed.

The impact of shuttering federal science for 16 days may not be immediately obvious to many Americans, at least not as obvious as closing national parks or Smithsonian museums. But the ripple effect of the shutdown, the sequester, and inconsistent funding by a fickle Congress is taking its toll on the public scientific enterprise. And that, in turn, will hamper private enterprise.

That's right. If not for government-funded research and innovation, many corporations -- and individuals -- would not be as successful as they are, and a number of them wouldn't be in business at all.

Let's start with the fact that you're reading this blog on a computer or another electronic device. In 1973, the U.S. Defense Advanced Research Projects Agency launched a research program called the Internetting project, which developed procedures, or protocols, enabling computers to communicate across multiple, linked networks. In the mid-1980s, the National Science Foundation underwrote the development of DARPA's system of protocols that provide the backbone of what we now call the Internet. Without the Internet, Facebook CEO Mark Zuckerberg's net worth wouldn't be anywhere near $19 million, let alone $19 billion.

Likewise, Apple and IBM owe a great debt to the U.S. Army. Although the Army didn't invent the computer, it built the first electronic digital computer capable of being programmed. That was back in 1945, and it was used to calculate World War II ballistic firing tables. The ENIAC (electronic numerical integrator and computer) weighed more than 30 tons, and had 19,000 vacuum tubes, 1,500 relays, and hundreds of thousands of resistors, capacitors and inductors. Although they're a lot smaller, most modern computers evolved from the ENIAC prototype.

Apple, which received early support from the U.S. government's Small Business Investment Company, also can thank government-funded projects for its iPod, iPad and iPhone. As Mariana Mazzucato, an economics professor at the University of Sussex, points out in her new book, The Entrepreneurial State, the iPod wouldn't exist if it were not for German and French government investments in giant magnetoresistance, which enables tiny disk drives. The touchscreen for the iPhone and iPad, meanwhile, was developed at the University of Delaware with funding from the National Science Foundation and the CIA.

"While Steve Jobs was a genius in his ability to exploit existing government-funded technologies in new ways," Mazzucato wrote in a recent essay on the PBS Newshour website, "he would have had little to work with absent massive public spending."

NASA research also has been a boon for the private sector. The space agency publishes an annual report, Spinoff, chronicling how the commercialization of its work leads to and improves products and services in a wide range of sectors, including energy and environment, health and medicine, information technology, and transportation. Last year's edition highlighted 44 examples, including Vecna Technologies' hospital robots, which were developed at the Massachusetts Institute of Technology with funding by NASA's Jet Propulsion Laboratory; Unpeeled Inc.'s kombucha-based probiotic drinks, developed by a former wastewater engineer at the Lyndon Johnson Space Center in Texas; and GreenField Solar's more efficient -- and less expensive -- solar cells, developed through a NASA Small Business Innovation Research partnership. Since 1976, the publication has featured more than 1,800 examples of NASA spinoffs.

If it weren't for Department of Energy research, ExxonMobil, Koch Industries and other oil and gas companies wouldn't be quite so profitable. In 1975, the DOE started funding research on fracking and horizontal drilling, which, as it turns out, is a mixed blessing. It took more than two decades of agency research -- and huge government subsidies and tax breaks for the industry -- to perfect the process.

Finally, I would be remiss if I didn't mention the economic impact of the National Institutes of Health. According to a July report by United for Medical Research -- a coalition of leading research institutions, patient and health advocates, and private industry -- NIH-funded research added $69 billion to U.S. gross domestic product in 2011 alone.

What does this tell us? I'll defer to Professor Mazzucato, who spells it out in her PBS Newshour essay, "The Entrepreneurial State: Apple Didn't Build Your iPhone; Your Taxes Did." She says the traditional economic theory that the government should limit its funding to basic research, and then the private sector will respond by innovating, doesn't hold up in the real world.

I argue that businesses are typically timid -- waiting to invest until they can clearly see new technological and market opportunities. And evidence shows that such opportunities come when large sums of public money are spent directly on high risk (and high cost) technological missions....


These missions are expensive precisely because the government does much more than just solve market failures. It intervenes in both basic and applied research and even provides early stage seed finance to private companies....

Mission-oriented public investment put men on the moon, and later, led to the invention and commercialization of the Internet, which in turn has stimulated growth in many sectors of the economy....

Crucially, mission-oriented policies are needed today to tackle climate change and other large societal, technological challenges. But the fear that such investments will cause debt to rise too high and stymie growth--ignoring the potential positive effects on growth that these investments can make in the long run--is paralyzing governments throughout the world.

Furthermore, there is the general belief that the direction of investments should be determined by the market, not government, because government consists of a bunch of bureaucrats who lack expertise. But the technological leadership in countries like Singapore, Korea, China, Israel, Brazil, Finland, Denmark and Germany is a result of the well-funded network of state agencies in those countries that are able to attract expertise and drive change, working of course, alongside the private sector, but often leading it.

The bottom line? The private sector wouldn't be where it is today without government-funded science. In so many ways, federally supported science is critical not only to Americans' health, safety and well-being, but also to economic innovation, and we can't rely on corporations to fill that role on their own.