On Sunday, a gunman opened fire in Pulse nightclub in Orlando, Florida, killing 50 people and injuring several more. According to CNN, the shooter claimed allegiance to ISIS during the attack. On Sunday afternoon, Florida Senator Bill Nelson said that ISIS' news agency said the group is held accountable for the attack, but the reports remain unverified. With Brussels and Paris not so far behind us, and with so many words being associated to this event -- mass shooting, hate crime, terrorism, -- what comes next, as it always seems, a shocking chin-rub reaction from some to quickly blame the Muslims.

On the same day, James Wesley Howell -- a white man who is not a Muslim, was taken into custody by Santa Monica police officials, reporting he was going to attack the gay pride event. Cops found him with three assault rifles, clips loaded, and a five gallon bucket filled with chemicals wearing camouflage clothing in his car. James just like Omar Mateen who was involved in the Pulse Nightclub shooting, hated people who celebrate love and had plans to kill them. If he isn't Muslim, then why are we busy pointing fingers at a religion, rather catching the severity of hate.

According to data from the FBI, it was reported that 94 percent of terrorist attacks carried out in the United States from 1980 to 2005 have been by non-Muslims. In Europe, where terror attacks have been more publicized in the past five years, less than 2 percent of terrorist attacks across Europe were committed by Muslims from 2010 to 2015, according to the Daily Beast. In the same article from the Daily Beast, data from a 2014 University of North Carolina reported that since 9/11 of the 190,000 Americans murdered, terrorism was responsible for only 37 of those deaths. 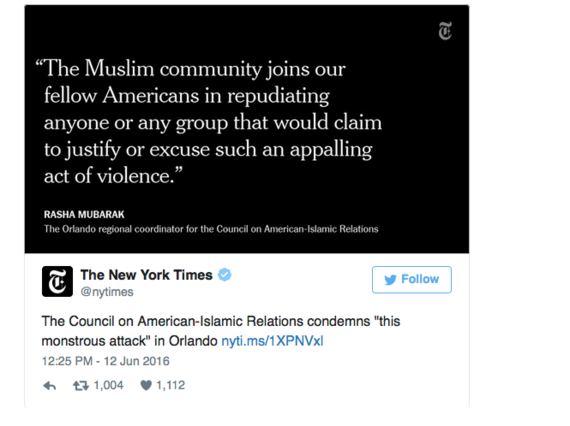 As an American Muslim living in this country I call home, these numbers leave my heart heavy and my soul shaken. As a young woman living in this country, things have changed for better and many for worse. I now triple check the lecture hall in a crowded college campus. I sit near the exit rows in movie theaters in fear. The idea of a crowded concert or parade makes me question, is it worth my life? Mass shootings mortify me. We have reached a point now, where a superlative headline like "worst shooting in American history" have separated the other hundreds of mass shooting incidences that occur everyday. We truly live in a scary world. Every bloodcurdling word has been used to define these acts, but the deadliest fact about this all is, the issue isn't Radical Islam, the issue is guns.

Falsely ridiculing and blaming Muslims is not only a waste of time, but it is another trap for people to ignore the real problem of gun control. The real truth is, the vast majority of mass shootings and terror attacks are not committed by Muslims. There have been enough mass shooting in the US last year for one to happen almost every single day of the year, with the exception of 10 days. Mass shootings occur in places we know as safe like an Elementary School, sacred like a church, and even fun, like a club or parade. Chances are no matter who you are or where you are in the United States, you could get your money's worth on a gun. When 20 kindergartners were killed, nothing happened. When nine lives were taken during a Bible study, nothing changed.

As long as people continue to falsely place the blame on the religion of Islam, and ignore the severity in lack of gun control, nothing will change to solve this issue. People will continue to purchase guns, and people will continue to die. There will be another "horrific attack since 9/11" and yes it will be more terrifying than the Orlando incident. So drop the labels, and jump on the idea that we need gun control. I, as a Muslim can tell you, Muslims and Islam are not what you should be scared of. Be scared of not being proactive. Be scared of nothing changing. Because lets face it, that is the real danger. That's the threat that facts can support.