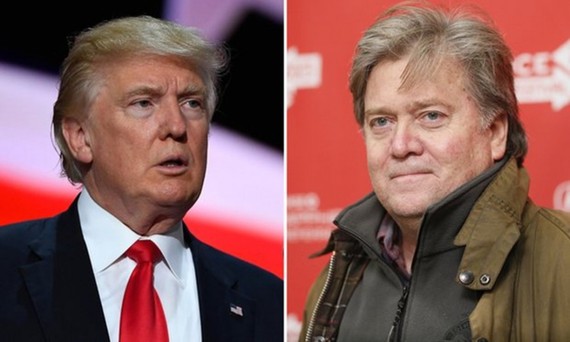 Working in the film business, I briefly met the Donald Trump Republican presidential campaign's new CEO, Steve Bannon, during the 1990s when he was a Hollywood investment banker. As one producer whom Bannon helped raise capital for told me, even back then he was an angry, racist, egregiously aggressive, and inappropriately temperamental character.

Bannon was also whip smart with a sophisticated understanding of how the media works.

Inside the liberal bubble, Democrats may be taking Bannon's appointment to help run Trump's campaign as a something of a joke. But, at their peril, they underestimate Bannon's ability to harm Hillary Clinton, the Democratic presidential nominee.

Bannon was one of the early Harvard MBA-type financial pirates who realized that Wall Street money could be tapped to finance film and television, often with disastrous results for the investors but with great results for the Hollywood studios and the financial engineers like Bannon who brokered the deals.

In the late 80s-early 90s, Wall Street discovered that intellectual property like movies and television and the companies that owned them could be bought, sold and traded just like hard assets such as real estate and commodities. Bannon engineered some of those transactions, first as a specialist at Goldman Sachs, then at his own boutique investment bank Bannon & Co., and briefly in partnership with a volatile manager Jeff Kwatinetz (whose first claim to fame was discovering the heavy metal band Korn and managing The Backstreet Boys).

Bannon was tough and merciless. It was Bannon who personally stuck the shiv in the heart of former superagent and Disney President Michael Ovitz, effectively ending the career of the man who had been known as the most powerful person in Hollywood.

After being fired by Disney, Ovitz set out to create a powerful new entertainment company called the American Management Group, with clients like Leonardo DiCaprio and Cameron Diaz, in which Ovitz invested over $100 million of his own money. (I remember visiting AMG's new offices, the most expensive and lavish in Beverly Hills, with millions of dollars in art by the likes of Mark Rothko and Jasper Johns adorning the walls.) But AMG was an abject failure, bleeding millions of dollars a month, while Ovitz desperately sought a buyer. Finally, the only available buyer was Kwatinetz and Bannon.

According to Vanity Fair, Bannon went alone to see Ovitz and offered him $5 million, none in cash. After a moment of silence, Ovitz told Bannon, "If I didn't know you personally, I'd throw you out of the room." But out of options, Ovitz ended up selling to Kwatinetz and Bannon's company, effectively ending Ovitz's legendary Hollywood career. (Remember that, Hillary.)

Bannon's smartest (or luckiest) deal was brokering the sale of Rob Reiner's company, Castle Rock Entertainment, to Ted Turner. In lieu of part of its brokerage fee, Bannon & Co. agreed to take a piece of the future syndication revenues from five TV shows, one of which turned out to be Seinfeld. The rest is history.

The Seinfeld royalties freed Bannon (with a reported net worth of $41 million) from needing to work for a living, allowing him to try his hand at producing (including the Sean Penn-directed "Indian Runner" and a number of right-wing documentaries) and then to throw himself into extremist and racist alt-right politics.

He invested $1 million in a laudatory film about Sarah Palin and became a close confidante. He then attached himself to Andrew Breitbart and took over Breitbart News after Andrew Breitbart's sudden death at 43, moving the already far-right website closer to the openly white nationalist alt-right. There he became a major advocate for Trump before being tapped to help run his campaign.

But Bannon's real danger doesn't come so much from his work with Breitbart News, which plays mostly to the angry, racist white base. It comes more from the Bannon-funded Government Accountability Institute, a research institute staffed with some very smart and talented investigative journalists, data scientists and lawyers.

GAI's staff does intensive and deep investigative research digging up hard-to-find, but well-documented dirt on major politicians and then feeding it to the mainstream media to disseminate to the general public.

Among other things, its staff has developed protocols to access the so-called "deep web," which consists of a lot of old or useless information and information in foreign languages which don't show up in traditional web searches, but often contains otherwise undiscoverable and sometimes scandalous information which Bannon then feeds to the mainstream media.

Bannon's mantra for GAI is, "Facts get shares, opinions get shrugs." GAI's strategy is to feed damaging, fact-based stories that will get headlines in the mainstream media and change mass perceptions. According to Bloomberg, "GAI has collaborated with such mainstream media outlets as Newsweek, ABC News, and CBS's 60 Minutes on stories ranging from insider trading in Congress to credit card fraud among presidential campaigns. It's essentially a mining operation for political scoops."

One of Bannon's key insights is that economic imperatives have caused mainstream media outlets to drastically cut back budgets for investigative reporting. "The modern economics of the newsroom don't support big investigative reporting staffs," says Bannon. "You wouldn't get a Watergate, a Pentagon Papers today, because nobody can afford to let a reporter spend seven months on a story. We can. We're working as a support function."

So GAI's strategy is to spend weeks and months doing the fact-based research that investigative reporters in the mainstream media no longer have the resources to do, creating a compelling storyline, and then feeding the story to investigative reporters who, whatever their personal political views, are anxious in their professional capacity to jump on. As a key GAI staffer says, "We're not going public until we have something so tantalizing that any editor at a serious publication would be an idiot to pass it up and give a competitor a scoop."

It's likely no accident that in the week since Bannon officially joined the Trump campaign, media attention has shifted from focusing primarily on Trump's gaffes to potential corrupting contributions to the Clinton Foundation in exchange for access to Secretary of State Clinton.

GAI's biggest, and most effective project has been to uncover the nexus between Bill and Hillary's paid speeches, contributions to the Clinton Foundation by corrupt oligarchs and billionaires, and access to the State Department by donors. The research culminated in the book Clinton Cash by Peter Schweitzer, president of GAI, and published by mainstream publisher Harpers.

The back cover of Clinton Cash summarizes its premise:

The Clintons typically blur the lines between politics, philanthropy, and business. Consider the following: Bill flies into a Third World country where he spends time in the company of a businessman. A deal is struck. Soon after, enormous contributions are made to the Clinton Foundation, while Bill is commissioned to deliver a series of highly paid speeches. Some of these deals require approval or review by the US government and fall within the purview of a powerful senator and secretary of state. Often the people involved are characters of the kind that an American ex-president (or the spouse of a sitting senator, secretary of state, or presidential candidate) should have nothing to do with.

Bannon and Schweitzer have so far failed to prove any explicit quid pro quo. But they're highly successful at making the nexus between the Clinton Foundation, Bill and Hillary Clinton's paid speeches, and special access for donors feel dirty and unseemly.

Before and after its publication, Clinton Cash got considerable play in the mainstream media. The New York Times ran a front-page story with the headline, "Cash Flowed to Clinton Foundation Amid Russian Uranium Deal," drawing on research from Clinton Cash

In an op-ed piece in the Washington Post, Larry Lessig, Harvard Law professor and progressive crusader against money in politics concluded, "On any fair reading, the pattern that Schweitzer has charged is corruption." And it seems that Bannon and Schweitzer have more damaging research on the Clintons that they will drip out through the campaign. Schweitzer has warned that more emails are coming showing Clinton's State Department doing favors for foreign oligarchs.

Bannon's strategy may not be enough to win the White House for Trump. But it will almost certainly do further damage to Clinton. Voters already think Clinton is less trustworthy than Trump. According to a recent Quinnipiac poll, 53 percent of likely voters say Trump is not honest (with 42 percent saying he is honest). But a huge 66 percent of voters say Clinton is not honest, compared to 29 percent who say she is.

Bannon's work for Trump could drive Clinton's honesty score even lower. Clinton's core strategy has been to disqualify Trump as a potential president and commander-in-chief among a majority of voters. Bannon's strategy is to do the same for Clinton.

Faced with a choice between two presidential candidates whom a large swath of voters find untrustworthy and distasteful, Trump's outrageousness may still enable Clinton to grind out a victory from a sullen electorate. But it's going to get even uglier. And even if Clinton wins, popular distrust could harm her ability to govern.

In that context, it would be a huge mistake for Democrats and the Clinton campaign to underestimate Steve Bannon.