"Police: MN Man Killed His Family, Then Himself"

These are just a sampling of the unspeakable tragedies that have captured the headlines over the past several months in America. As a survivor of domestic violence who was shot, I am all too familiar with the dangerous combination of a violent and angry ex-partner, and easy access to guns.

Nearly three years ago, my estranged husband appeared at my apartment and shot through the door with a 9mm Beretta handgun, behind which my father, my son, and I were standing. My hand exploded in front of my face and my father was struck at point-blank range. My four-year-old son screamed, "Don't do it Daddy, don't shoot Mommy!" and then watched me crawl in my own blood and beg for my life.

My father and I are lucky to be alive. We suffered two bullet wounds each: mine in the hand and chest, his in the side and arm. I was transported by helicopter to the trauma unit; my dad was admitted to the intensive care unit. My 4-year-old son was interviewed -- alone -- at the police station. He didn't know if his mommy was dead or alive.

I learned the hard way about the gaping loopholes in our national and state gun laws when it comes to abusers. While police were able to remove the many shotguns and handguns my ex-husband kept in our home after I obtained a temporary restraining order, he was still able to legally purchase another gun that he then used to stalk me and attempt to take out my family. He now sits in Broward County Jail awaiting trial for attempted first- and second-degree murder.

There is a deadly relationship between guns and violence against women in America. Research shows that more than half of women murdered with guns in 2011 were killed by intimate partners or family members. When a gun is present in a domestic violence situation, women are not safe -- in fact, it is five times more likely they will be killed.

And it's surprisingly easy for domestic abusers to get their hands on guns -- even in situations where they are prohibited from having them. Because 32 states that do not require criminal background checks on all gun sales, domestic abusers can easily purchase guns from private sellers, including online, and avoid a background check -- completely anonymously and with no questions. And they do. In fact, research shows one in 30 gun buyers on the popular website Armslist.com are prohibited from owning guns because of a criminal record.

This loophole puts the lives of abuse victims at significant risk, especially considering there are common sense solutions to keep guns out of the hands of domestic abusers. For example, in the states that require background checks on all handgun sales, 46 percent fewer women are murdered with guns by intimate partners.

Here's the good news: some progress has been made. Over the past year, nine states enacted bipartisan legislation that will help keep guns out of the hands of domestic abusers. Each of these measures have been passed by state houses with bipartisan support and signed into law by governors of both parties.

At the federal level, U.S. Senator Amy Klobuchar (D-MN) has introduced the Protecting Domestic Violence and Stalking Victims Act (S. 1520), which would close loopholes in federal law that allow abusive boyfriends to buy guns, even though abusive husbands are prohibited from doing so. This is important because today, more women are killed by dating partners than spouses, but current federal domestic violence law does not include abuse between dating partners.

It's time for our political leaders in Washington to follow the leadership of the states that have already stepped up to the plate and close the loopholes that make it easy for abusers and other dangerous people to get guns by requiring background checks on all gun sales.

Tragically, it's too late for countless women, children and others who have fallen victim to an abuser with a gun -- their voices are forever silenced. For them, I have vowed to never stop speaking out and will continue to use my voice to educate others about the fatal connection between domestic violence and guns. I implore others to join me -- we need all voices to pay attention and speak out on this issue. Don't wait until you or your family become the headline of a national domestic violence story. 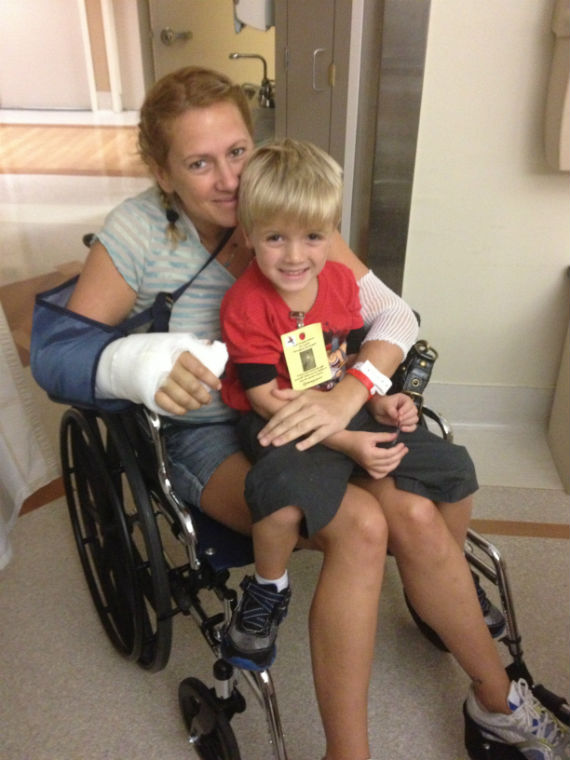 Kate and her son