Morally speaking, I could never donate my hair -- that is, if I had hair to donate.

I have had alopecia areata, an autoimmune disease that causes hair loss, from the earliest I can remember. Throughout my childhood, my bald spots would come and go in every size and shape. Some were no larger than a dime, while others were as large as a gold medal.

It wasn't until my junior year of high school, however, that I began to lose large clumps of my hair, an experience that was absolutely devastating to me. Naturally, as a young girl, I wanted to feel pretty.

At that time, wearing a beanie seemed like an easy enough fix. I had enough hair left that wearing a wig or shaving myself completely bald seemed over the top.

But within half a year, I had only tufts of hair left. I was sick of always having to wear a beanie. I hated that I also managed to close myself off emotionally from the rest of the world -- I felt no one understood what I was going through. Most of all, I couldn't stand feeling like I had something to hide all the time. That something turned out to be myself.

I decided to shave my head completely. I came to school one day with a shiny, bald head. And that's how it's been ever since.

Of course, coming out as bald was by no means easy. It took awhile for me to become used to the curious stares, the innocent questions, and the occasional mean-spirited remarks.

But I wouldn't trade any of that now for where I had been before. I feel secure in knowing my friends are my friends because of who I am -- and not because of how I look. I am fortunate that people recognize my transparency and that I am someone who can be trusted. Above all, I love that I have become a repository for people's life stories. People see that I have been through some sort of life-changing experience, and as such, they recognize me to be someone with whom they can openly share their own experiences.

I hope that I make more sense now when I state that donating hair is actually an immoral thing. I understand the good intentions behind such donations, but such good intentions only really amount to a lack of understanding.

If you give a bald little girl a wig to wear, you perpetuate the idea that her lack of hair is unacceptable to you and the rest of society. You train her to believe that she can't be pretty the way she is. She is led to believe that people will judge her negatively for her so-called imperfections. Her identity amounts only to her appearance. She must hide anything that makes her unique: all that matters is that she fit in.

We as a society have come to believe that donating hair is a show of support for people who have diseases like alopecia. I challenge that notion. Supporting a bald little girl involves more than just handing her a wig. Simply put, there are more powerful ways to advocate for people like her. Come to a support group meeting. Participate in a run/walk. Lobby on Capitol Hill. But really, it's not so much support that a bald little girl needs, as it is validation. Telling her that she is beautiful the way she is will make her feel validated -- and that's something she will never forget.

Nothing is fundamentally wrong with the little girl who has no hair. But there is something wrong in telling her that her baldness is a problem she needs to fix. 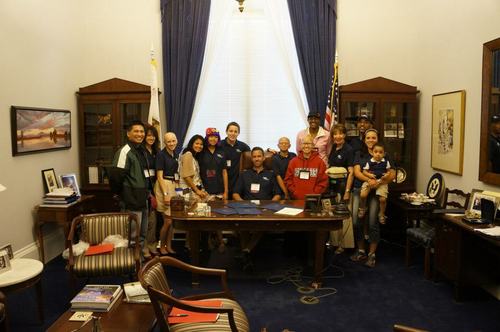 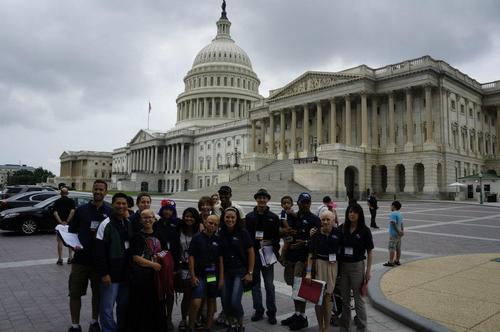 Photos from the 2012 National Alopecia Areata Foundation Conference, when we lobbied on Capitol Hill.