When markets get a little choppy, as they have been recently, it’s useful to remember just how good the tax benefits of a 401(k) are.

Of course, 401(k)s are a deficient, problem-riddled way to structure the retirement savings of a developed country. 401(k)s are largely a tax-avoidance strategy with small-scale corporate beneficence (matching contributions!) and the possibility of some market upside thrown in.

The important thing about a 401(k), though, is that a short-term drop in the value of your account usually doesn't mean you're really losing money. To lose real money in a 401(k), your account has to drop in value over the long-term even after the tax benefits are considered. 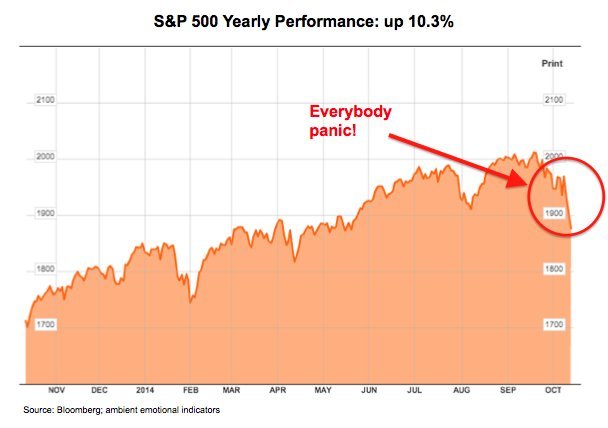 Despite their worst three-day performance in three years, stocks are still up 10.3 percent over the past year.

Taking taxes into account, the market would have to fall 25 percent in a year for your 401(k) contribution to lose money.

And that very rarely happens.

There have been nearly 30 instances when stocks fell by 10 percent or more, roughly once every two years. [...] In that time stocks have only fallen 30 percent or more five times. It happens, but it’s rare [...] The huge losses are the exception, not the rule. Two-thirds of the time, when the market falls by double digits, it’s down by less than 20 percent. About half the time it’s down less than 15 percent.

Unless you are forced to sell a portfolio that’s been completely invested in stocks for less than a decade at the depths of a massive market collapse, tax-deferred investing that produces any return above inflation will work in your favor. There are lots of reasons to worry about a retirement system based on individual investing that costs the government $240 billion a year in revenue, but ultra short-term market swings are not one of them. Even returns well below the average gain of 10 percent make tax-deferred investing worth it.

Markets do their thing –- go up and down -– and you do yours –- use tax incentives to save the best you can. That’s the current plight of the American saver. It’s not nearly good enough, but after Social Security, it’s all we have.

Update: Just to be clear, because a few readers have written about this: You will of course have to pay taxes when you finally cash in your 401(k) plan, but that is beside the point of this story, which is about whether you should worry about short-term fluctuations in an account you have no intention on cashing in any time soon.