This is not a joke. You have not yourself gone "loco." The @doritos Twitter handle revealed on Monday morning that Doritos Locos Tacos, surely the world's most meta chip, would be going on sale on April 8. Here's the announcement:

Doritos Locos Tacos will become chips 4/8! Your chance to win a #DoritosPallet: tell us how bold you'd go to try them http://t.co/Dy6ohDL1jS

PepsiCo had previously announced that it would be releasing a line of limited-edition chips with Taco Bell-themed flavors in attempt to ride the extremely successful coattails of the Doritos Locos taco. But few outside PepsiCo or Taco Bell dared dream that we would see actual Doritos Locos Doritos in our lifetimes, let alone in April.

To put aside the astonishment for a second, though, what exactly are Doritos Locos Doritos, other than insanely self-referential? A close examination of this high-res product shot uploaded to the Doritos Facebook page reveals that each flavor of Doritos Locos Doritos includes two kinds of chips in one package -- half "Cool Ranch" or "Nacho Cheese" and half "Crunchy Taco": 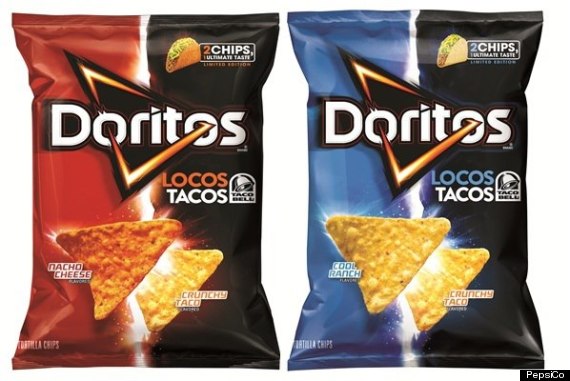 The maker of Doritos has long produced a "Taco"-flavored chip that looks pretty much the same color as the "Crunchy Taco" chips on the Doritos Locos Doritos packaging. It's entirely possible, then, that the new flavors will really just be two current flavors of Doritos put together in one bag.

Same old products in garish new packaging -- that sounds about right for the crowning achievement of the free market.