Fast food. Junk food. Sooner or later, the two had to come together like peanut butter and jelly. And that time has finally come in an epic way, with two of the most iconic brands of American convenience cuisine. That's right; fast food giant Taco Bell has been thinking outside the bun -- and inside a bag of Doritos -- to bring you crispy taco shells made from the famed nacho cheese-flavored tortilla chip. This is either a triumph or a disgrace to American fare, depending on your opinion of them -- and if you're in the camp that thinks the latter, then you're obviously not in Taco Bell's target demographic.

For those that are, this Taco Bell-Doritos collaboration has been a long time coming. Fast foodies have been salivating for its release since the announcement last year, and it has taken months of market research and focus groups to get the final product, the "Doritos Locos Tacos," as awesome as they could be before its nationwide release. It's finally here, and here's how it rates:

The Claims: There are two menu items with the Nacho Cheese Doritos-flavored taco shells: the Doritos Locos Tacos, with seasoned ground beef, shredded lettuce and shredded cheddar cheese (170 calories each); and the Doritos Locos Tacos Supreme, all of the above, plus diced tomatoes and reduced-fat sour cream (200 calories each). Prices vary at participating locations. 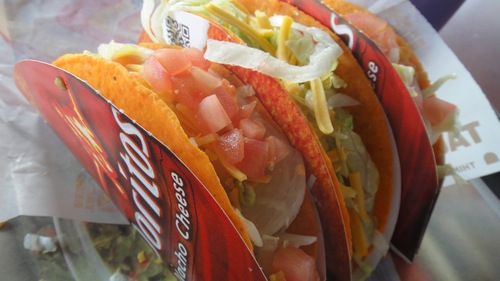 The Verdict: B. This isn't the first time Taco Bell and Frito-Lay, producer of Doritos, have partnered up; last year, Taco Bell's Beefy Crunch Burrito contained red-colored "Flamin' Hot" Fritos (another branded product of the snack chip company). However, this time a Frito-Lay snack chip is topped billed in the product name, with "Doritos" namedropped right at the beginning -- which means it better deliver while keeping the brand intact. Not only that, the crispy shell needs to physically remain intact, and not crumble into the nacho cheese-flavored crumbs you find at the bottom of a Doritos bag.

The other problematic issue with making a taco shell out of Doritos is the mess; who hasn't eaten from a bag of Doritos and not gotten their fingers all orange and dusty from all that nacho cheese flavor powder? Taco Bell addresses both of these issues by serving each taco in a cardboard sleeve, cut to the exact size and shape to hold it. Not only does it help protect the shell from crumbling apart and keep your fingers from getting all orange while eating, but it also allows for more advertising, brand awareness and copywritten lines inviting people to "celebrate awesomeness."

Speaking of awesomeness, that brings me to my next point: just where is the awesomeness? I won't deny that on paper, the idea of making taco shells out of Doritos is awesome for the fast food/junk food connoisseur -- in fact, it's mind-blowingly awesome. But when I bit into a Doritos Loco Taco, my initial thought was that it is, well, exactly what it is. And the more I ate and thought about it, I realized, "Hmm... it's just Taco Bell... inside a Dorito." Which is exactly what it is supposed to be. I don't know why I expected more than that -- although the hype and cult of both Doritos and Taco Bell had a lot to do with inflated expectation.

My final analysis: it is what it is. The taco doesn't really enhance the Doritos, nor the other way around. It's merely like eating a mediocre Taco Bell taco and a small bag of Doritos at the same time -- which is good, just not "awesome" from a taste point of view. The "supreme" variation with tomatoes and sour cream helps -- especially when you add some Border Sauce -- but it's sort of just like eating Taco Bell's Nachos Supreme (without the beans) and a bag of Doritos. Good -- but not awesome -- for what it is.

The calorie counts for the supreme and regular versions are identical to their non-Doritos counterparts on the menu. The main difference, as seen on the nutritional chart, is that the Doritos version adds 50 mg of sodium. But what do you care? If you're in the demographic that Taco Bell and Frito-Lay has targeted, you're going to order it anyway, and enjoy it.