South Korea's obsession with plastic surgery is moving on from standard eye and nose jobs to embrace a radical surgical procedure that requires months of often painful recovery.

A stream of celebrities boast on TV shows how it gave them a "new life," while advertisements extolling its cosmetic benefits are everywhere from street billboards to subway stations, magazines and popular Internet sites.

But there's nothing really "cosmetic" about double-jaw surgery.

A radical solution to congenital facial deformities or for people unable to chew properly due to excessive over or underbite, the operation involves realigning the upper and lower jaws.

One result of the bone-cutting procedure is often a slimmer jawline -- and that's what caught the attention of South Korea's booming beauty industry.

A small face with a "V-shaped" chin and jawline is considered a mark of feminine beauty in much of East Asia, along with a high-bridged nose and big eyes.

"This surgery alters your look far more dramatically than, say, Botox or a nose job because it changes your entire facial bone structure," said Choi Jin-Young, a professor in dentistry at Seoul National University.

"But it's a very complex, potentially dangerous surgery ... it's disturbing to see people with no real dental flaws daring to go through it just to have a small, pretty face," Choi told AFP.

The procedure, which involves general anaesthesia and takes months to recover from, carries the risk of various complications including permanent facial numbness or even paralysis.

Data from the International Society of Aesthetic Plastic Surgeons suggests South Korea has one of the highest per-capita rates of plastic surgery procedures in the world.

Cut throat competition among the growing number of plastic surgeons has driven some to promote more radical procedures that others might not offer.

A number of celebrities, some reportedly paid by doctors, underwent double-jaw surgery and later appeared on TV talk shows saying it had provided a "turning point" in their career and personal lives.

There is no official data on how many double jaw surgeries are performed. One recent study estimated the annual figure at 5,000, but it did not differentiate between cosmetic and medically prescribed procedures.

Some 52 percent of those who had taken the surgery suffered sensory problems such as facial numbness, the study said.

Seoul's consumer protection agency saw the number of registered complaints surge from 29 in 2010 to 89 last year, though many more cases of post-operative problems are believed to go unreported.

"My mouth keeps moving leftward and the jaw area has gone numb," wrote one user of a medical consumer online forum, showing photos of her skewed mouth.

"I can't even feel when saliva keeps dripping out of my mouth," she said.

Last August, a 23-year-old college who underwent double-jaw surgery killed herself. She left a suicide note explaining her desperation after the surgery left her unable to chew food or stop crying due to nerve damage in a tear duct.

Shin Hyon-Ho, a medical malpractice lawyer in Seoul, said he had seen cases where the surgery had resulted in chronic jaw pain, a skewed mouth, misaligned teeth and an inability to chew or smile.

A doctor with the Korean Society of Plastic and Reconstructive Surgeons said the procedure took off around four years ago when a Seoul dental clinic ran a major ad campaign promoting the cosmetic benefits.

As it became popular, plastic surgeons began offering the surgery, causing the price to fall and making it more affordable to more people.

"If we are seeing more complications, that's largely because the sheer number of people getting the surgery has increased rapidly in such a short period of time," said the doctor, who declined to be identified.

"Yes, it was originally invented to correct a dental deformity, but you can't blame someone for getting the surgery to look good, especially in a place like the South where beauty, especially for women, pretty much trumps it all," the doctor said.

Advertising for the procedure is prevalent and unambiguous.

"The double jaw surgery clinic chosen by the pickiest ladies," reads one typical poster on a Seoul subway station wall, with large before and after photos.

"Everyone but you has done it," admonishes another on a metro bus.

A Seoul lawmaker in January proposed setting a minimum age limit for plastic surgery, noting the danger of "bone-related surgeries" in particular.

But Lim In-Sook, professor of sociology at Korea University, said legislation couldn't tackle the root causes that push some women to risk their health for a prettier face.

"This is a highly male-dominated nation where women need both brains and beauty, or often beauty more than brains, to get a job, get married and to survive in all aspects of life," she said.

Plastic surgery, according to Lim, has become just another accepted way of giving yourself an edge in what is a super-competitive society.

"So every single part of our bodies becomes an object for nip and tuck," Lim said. "Today it's your jaw, but who knows what we'll have to fix tomorrow?" 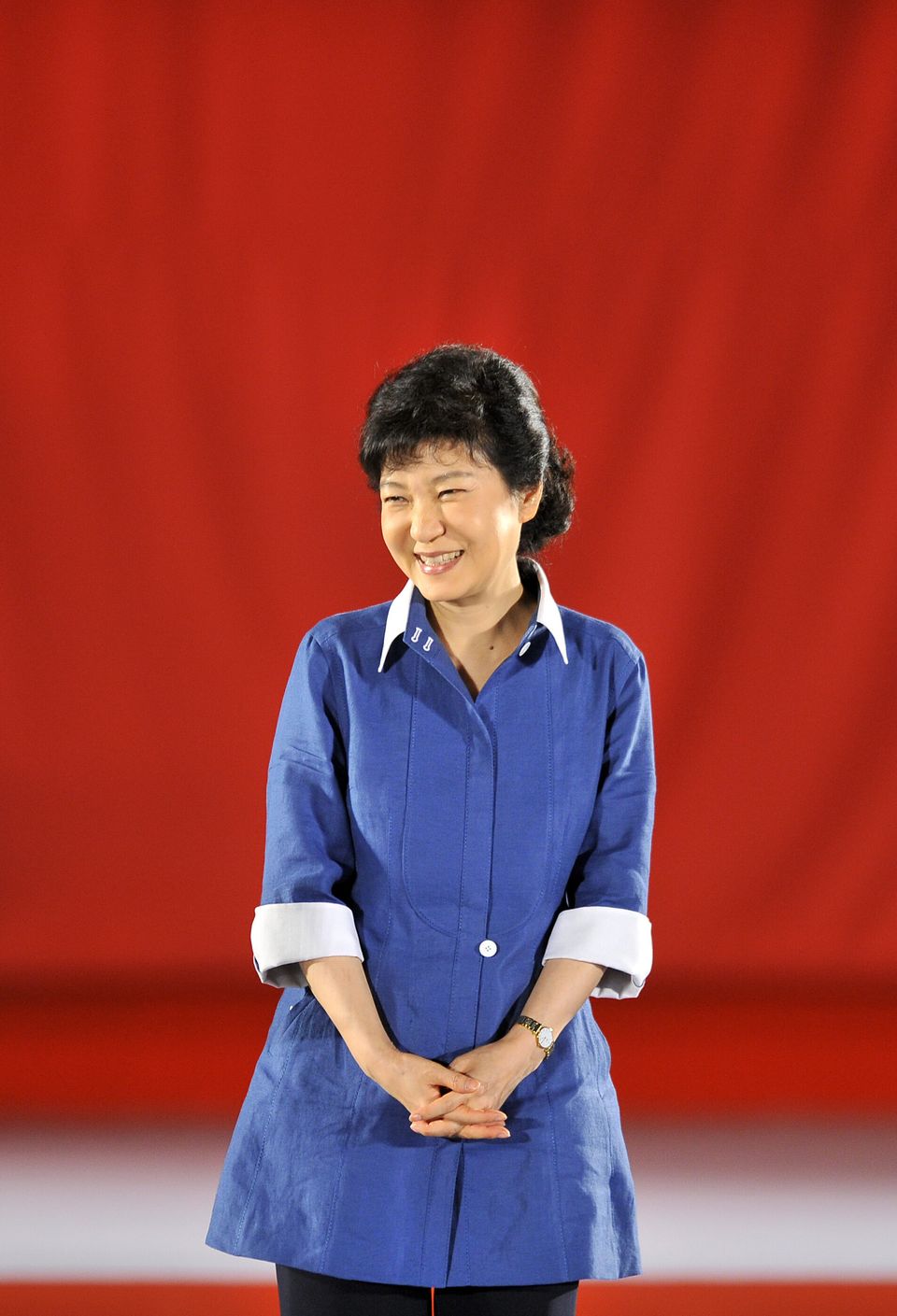 1 / 10
Security And Foreign Policy
Park says she's open to dialogue with North Korea's leadership but says large-scale aid depends on whether Pyongyang pushes ahead with dismantling its nuclear arms program. She says dialogue between the Koreas should resume in order to resolve a nuclear stalemate and to build trust needed to restore civilian exchanges. <em>Caption: Park Geun-Hye, the daughter of assassinated dictator Park Chung-Hee, smiles after being elected as a presidential candidate during a national convention of the New Frontier Party for a presidential primary in Goyang, north of Seoul, on August 20, 2012. (JUNG YEON-JE/AFP/GettyImages)</em>
Getty Images