No matter what the rest of the New Year brings, earthlings are in for a double treat in January with the appearance of two supermoons. The first one rises the night of New Year’s Day. The second — a bound-to-be-memorable “super blue blood moon” — comes the last night of the month, topped off by a lunar eclipse.

A supermoon is a full moon that appears at the perigee, the closest point in the moon’s orbit to Earth. Supermoons appear to be about 14 percent larger and 30 percent brighter than full moons that appear at the apogee, the farthest point in the orbit, according to NASA.

A supermoon is coming! On Jan. 1, the full Moon will be at or near its closest point in its orbit around Earth, making it a supermoon. Bundle up, get outside and look up! https://t.co/c0Ox5CDvmf Follow @NASAMoon for more lunar facts! pic.twitter.com/TH9H8Ly1V9

The January supermoons are the end of a trilogy of big moon treats that began Dec. 3 with a full cold moon (a December full moon) that made for some spectacular photos.

Supermoons hang around all night, are easy to see and are not damaging to the eyes, no matter how long you moon-gaze. They often appear at their most spectacular as they rise and set, NASA notes.

The Jan. 1 supermoon will be the biggest of the year. The moon will appear to be oversized for a few nights after that, though will no longer be a full moon.

For those still nursing a hangover the night of Jan. 1, an even more intriguing supermoon will rise the night of Jan. 31. That will be the second full moon of the month, which is usually called a “blue moon” because a double full-moon month occurs essentially once in a blue moon — about every 2½ years. A blue moon is even rarer when it’s a supermoon.

But that won’t be the only rarity that night. The super blue moon will also occur during a total lunar eclipse, when the Earth moves between the sun and the moon, blocking the sun’s light from reflecting off the moon. If skies are clear, the total eclipse will be visible from eastern Asia across the Pacific Ocean to western North America.

“Sometimes, the celestial rhythms sync up just right to wow us,” notes the space agency.

New Year Kicks Off With Supermoon Lunapalooza
The 2017 Supermoon 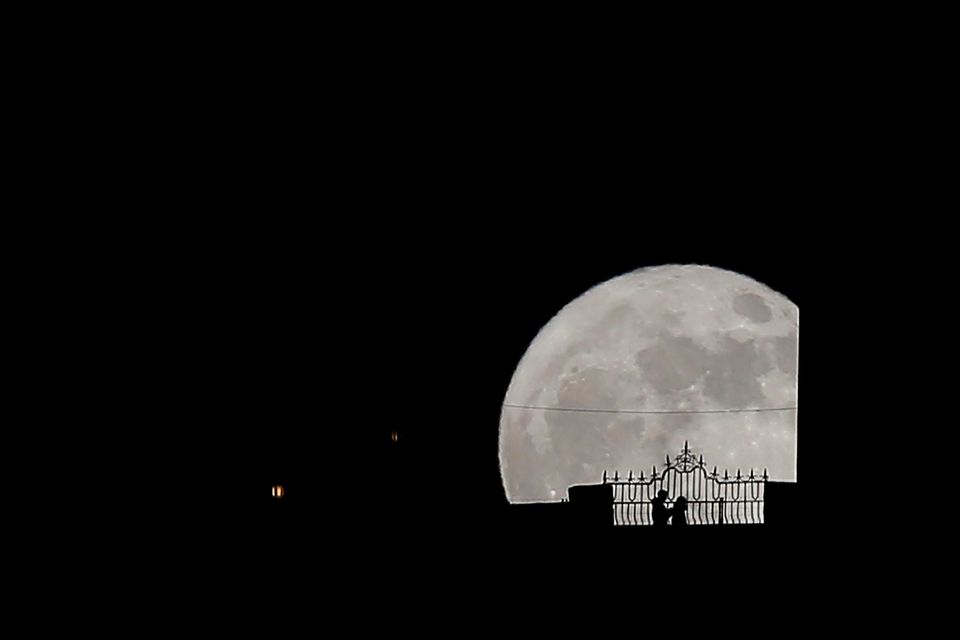 1 / 8
People walk along the "Puente Nuevo" (New Bridge) as they are silhouetted against the supermoon during its rise in Ronda, southern Spain, December 3, 2017
Jon Nazca / Reuters