When my youngest daughter was 11, she taught me an important life lesson.

I have always been a lover of backgammon; my mother initially taught me to play the summer I was nine. She was a winner, always able to roll doubles more than anyone else. "Vauclain doubles," we called them. Those of us who carried the name -- her maiden name is my middle name -- were inordinately proud of this bizarre talent. Backgammon was in Mom's blood. And, fortunately, I inherited those genes. At a young age, I became a whiz, rolling doubles more often than any probability expert would predict. 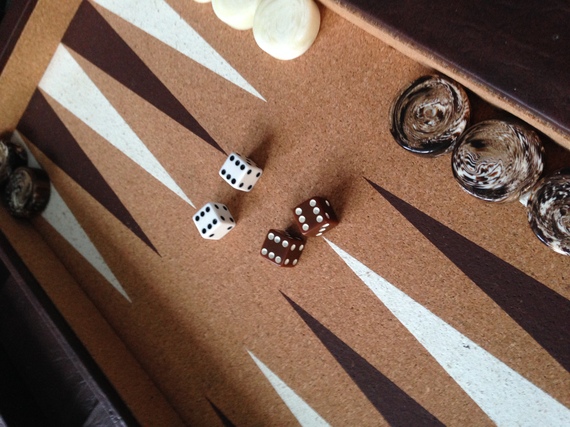 The set I learned to play with had red pips, my favorite, and dark amber ones. As a little girl, watching my mother's deft fingers move the men around the board, I remember feeling certain the yellow pieces were made of butterscotch. Licking tentatively, one evening, I hid my disappointment, checking to be certain no one had seen. After that I preferred red.

I learned about making bar points, building my board, taking risks, playing a back game, playing a running game. I loved "Lover's Leap," the 5-6 roll that allows you to take one pip halfway around the board early in the game. I learned that doubles can change everything; when they come, a quiet surge of power elevates she who rolls them. I learned to remember to pick up my dice, to play every game until it was over, and always, always to play the best out of three.

Once, at about age nine, I played against an adult houseguest, who laid her coaster over the corner of the board. As I was about to win, she smirked, lifted her drink and edged the coaster back to display two of my men, hidden underneath. I couldn't believe an adult would want to win so much that she would pull such a stunt. My disdain earned me a lecture on good sportsmanship from my mother; perhaps the houseguest might have benefited from one as well.

We never gambled, my mother and I, but my prowess led to a certain social cachet as I aged. I had a confidence born of luck that amazed my peers. I regularly annihilated good friends who had the grace to continue challenging me. Long weekends at our summer house were filled with backgammon: the satisfying roll of dice on cork, the click of the men moving, the groans as I rolled doubles again and again. My husband paid me the compliment of my life one evening as I gammoned him smugly: "Whoever told you that you weren't good at math never played you in backgammon."

I taught my daughters to play when they were eight and 10. They enjoyed it, but didn't play often enough to learn to set up the board or master the strategies. And then, three years later, Cordelia, the younger one, went for a forbidden late-night swim in the lake, and I caught her, and her punishment was no TV for several weeks. Woebegone, too tired to read but not yet tired enough to sleep, on the third night of her punishment, she asked if we could play backgammon.

"Sure," I responded, and we set up the board. As we began to play, I found myself coaching every move. When I put one of her men up, she expressed loud indignation. I felt annoyed. She could not see that each quarter of the board was divided into six. I watched her count over and over again, never really seeming to move with confidence. She was tired, often moving the wrong number of places. Sighing, I would correct her. We did not have a lot of fun. But we discovered that doubles were in her genes, too. Since her middle name is also Vauclain, she, of course, inherited the uncanny ability to roll doubles whenever she needed them. We continued to play, night after night, best out of three. "Bar point," I'd instruct. "Build your board. No, don't leave that one open." My commentary was unrelenting.

Finally one night she said, "We could just play, Mom. Isn't this a game? You don't have to tell me what to do on every move."

I felt my cheeks flush. Had I managed to squeeze every last drop of joy out of something that gave me so much pleasure? Was my school-marm approach murdering the game for her?

I nodded, "Sure, it's a game." We started again. I stopped trying to turn her into a backgammon maven. I stopped grimacing when she counted tentatively. I watched her make good decisions by herself, without my input. I lost a few games. I chose to ignore a few opportunities when I could have gone for the jugular because seeing your daughter's look of triumph in victory is more important than winning. "Ease up," I side-coached myself. "Just play."

A few nights later, my older daughter asked to play. Cordelia sat on the bed with us. Her commentary was continuous: "Build up your board, Miranda. 3-1 -- make your bar point. Go ahead, hit her, live on the edge." Miranda played well, but the doubles didn't come as often, and Cordelia struggled not to gloat.

Some time passed. In the fall, Cordelia and I played again. A few minutes into the game she said, "I'm losing. I'm totally losing."

"Because I don't like to hear you giving up at backgammon or at anything. I don't want you to quit when something feels hard, even something that doesn't matter like backgammon."

"Okay," she answered. Then she rolled a 6-4 and deftly moved one of her men from one quarter of the board to the other, without counting.

"Hey," I exclaimed, "Good job. You did that without counting -- even though there's nothing wrong with counting"

"Mom, I stopped counting in July. You just didn't notice."

We continued playing; she came from behind, rolling doubles four times in the last few rolls of the game. Ultimately I won by one.

"That was fun," she said. "Let's not play another one right now; let's end while we're both feeling so good."

That night, I called my mother, "Thanks for teaching me to play backgammon, Mom."

"It's in your blood," she answered.