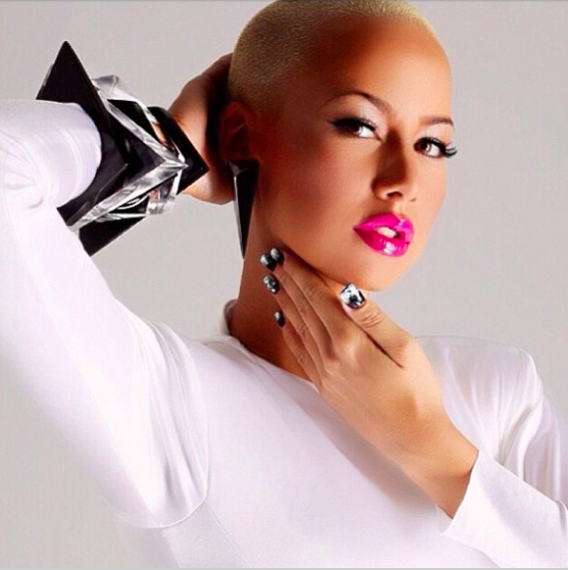 Amber Rose attempts at breaking out of the box with her new found success with Zoobe, acting, shades wear line, and more is impressive yet it won't be enough to stop the world from seeing her as nothing more than a former stripper. It's the one thing people cling on to when recalling who a person is, based off of what they've done. For instance, take NeNe Leakes, our beloved Real Housewives of Atlanta breakout star. Ask anyone how she started and they will tell you, "Oh she used to be a stripper." As a former sex-worker, and ex-stripper I know how annoying it is that people won't and can't look past your past to see your new bright future but unfortunately, I don't see this changing much! It's as if your worth stopped at those things, and nothing and I do mean nothing will ever change their view about you. Actually, anything the public deems as a negative connotation as it relates to sex and your past will stick. Think I'm kidding? Well, look at Oprah! When people describe her accomplishments they will most likely always bring up the fact that she was sexually abused as a child. This is one reason women don't come forward with their past dealings as it relates to sex crimes or past history in the field of sex-work.

Women go on passing (the act of hiding their past) forever, because they don't want the stigma attached to them, and they don't want to be associated with "that" life. It's because society holds a woman's sexual exploits and past history against them. They find them less than, unpure, unclean, and unworthy? Isn't that silly?

In fact, a woman doesn't even have to have a sex work or a sexually abusive past and they slut shame and attack her. Take the singer Ciara for instance. This past weekend she got engaged to her boyfriend and instead of being happy that she found true love people attacked her (mostly men). They slut shamed her and called her everything but the child of GOD when she got with Russell Wilson and because she has a child with a rapper. She was involved with Future and it didn't end so well, so she moved on. The men called her whores, nasty, bitch, slut, etc. Now mind you this is her first child. Future? Well, he has three kids and three baby mammas. I can't really find anywhere where they call him degrading names, insult, or slut shame him. Double standards much?

I have to agree with Amber Rose here when she stated that no one brought up Channing Tatum's stripper past. In fact hell, he recreated his life with the movie Magic Mike! Still I don't see people using his past as a tool against him, there is no slut shaming involved. Why? Because slut-shaming is a bullying tactic used against women. Men usually have extensive past sexual exploits but no one and I mean no one is going to say a damn thin about it. Is this fair? Hell no! Is it going to change? Hell no!

I commend Amber for challenging society with her slut walk, and speaking out. I for one am tired of the double standards that men and women have when it comes to past sexual exploits. There are men whose very lives have been aired out about their sexual trysts with a plethora of women. There are famous men who have been accused of rape and allowed to continue on with life as if the accusation never happened. These men are seen as nothing more than a playboy. They are applauded for plastering photos online while they are the patrons at the strip club making it rain. No one even bats an eye, they just chalk it up as the "bachelor's lifestyle."

A woman should not be defined by what she has done in her past. However, when a woman uses hypersexuality as a way to advance in society should they really be all that surprised when people bring up their past sexual exploits? Maybe people look past others past because they don't associate with it anymore? They aren't posting nude photos, or half nude photos online for likes then quickly yelling at people to let them be the forward living and thinking feminist that they are. When you live by hypersexuality it is a constant reminder of the past, I'm just saying.
Yes, every woman deserves to do what the fuck she wants to do, how she wants to do it. However, when you post your goodies online for the world to continually see, young children included people will form an opinion about you. Warranted or not. Remember, it's social media and they have rights just like you to post what they want. With social media all opinions matter do they not? It's their platform and they can utilize it however they deem fit, right or wrong. I mean be prepared for the repercussions due to your said opinions. But when you are in the media spotlight it just comes with the territory.

Take me for instance, I use my past as a platform to educate and raise awareness on the topics of sex crimes, sex trafficking specifically. But I'm in a different arena where my sexuality is a thing of a past, and I no longer associate myself with it. You won't find photos or videos of me twerking, or being hypersexual. I'm a different person now. However, I know that my past is still what people think of when they deal with me and you know what? I'm okay with that.

My dearest Amber, I know it's been 5 long years and you want people to get over it. But Muva, it's not that simple. Wishful thinking yes, but not so easy. As long as you have forgiven yourself for your past, and moved on that's all that matters. Stop worrying about what people think and say, keep twerking, wearing your sexy attire, and most of all being the bad ass bitch (her words not mine) that you are. Us forward thinking progressive feminists have your back. Us sisters who were in the life have your back. You are a success story and my dear, that's all that matters.