While many people worry about the future of San Francisco, there's one thing they cannot fix about the past. Marian and Vivian Brown, the famous identical twins who were a part of the city's cultural landscape for more than four decades, are dead and gone. No app could possibly replace them.

Born on January 25, 1927, the Brown twins were often spotted in identical outfits at all kinds of events around town. During their 40+ years of celebrity, they appeared in more than 25 television ads until Vivian died on January 9, 2013. Marian died the following year, on November 20, 2014. Their presence is sorely missed.

Whether in fact or fiction, twins have always been a part of the cultural landscape. Actors Jon and Dan Heder are identical twins, as are bass-baritones Eugene and Herbert Perry and politicians Julian and Joaquin Castro. Advice columnists Ann Landers and Abigail van Buren were stars of newspaper publishing for decades; the Winklevoss Twins are known primarily within investment circles. In a recent prank, several sets of twins teased riders in one of New York City's subway cars.

Twins often take on bizarre attitudes in fiction. In 1967's Something Different (Carl Reiner's only play written for Broadway), the protagonist and his wife have two sons who always speak in unison. What makes these identical twins so unique? One is white, the other is black. Consider Tweedle-Dee and Tweedle-Dum from Walt Disney's 1951 animated feature, Alice in Wonderland.

In 1997, a new musical entitled Side Show, based on the lives of two famous vaudeville stars who were conjoined twins (Daisy and Violet Hilton), opened on Broadway. In the following clip, Cheyenne Jackson and Jeremy Jordan are seen singing the show's Act I finale, "Who Will Love Me As I Am?" Below that is a video clip from the Rescigno twins, who offer a deliciously manic take on the show's big hit: "I Will Always Love You."

Born in New York City and raised in southern Delaware, Paul and Robbie Rescigno are twin performers with a unique act at their fingertips. 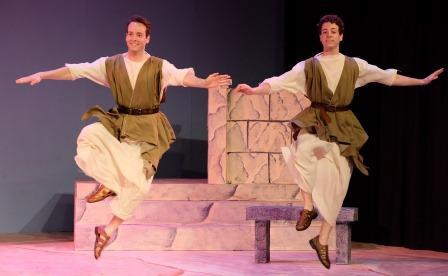 Dromio of Syracuse (Robbie Rescigno) and Dromio of Ephesus
(Paul Rescigno) in a scene from The Boys From Syracuse
(Photo by: Dominic Colacchio)

Based on Shakespeare's farce, The Comedy of Errors (1594), this revival of The Boys From Syracuse marks the final production directed by Greg MacKellan, 42nd Street Moon's co-founder and artistic director. The company's loyal audiences couldn't haven't hoped for a more joyous farewell.

With music by Richard Rodgers, lyrics by Lorenz Hart and a libretto by George Abbott that remains razor sharp nearly 78 years after the show premiered on Broadway, The Boys From Syracuse tells the tale of two sets of identical twins who were separated in their youth during a storm at sea. One made it safely to Ephesus, where he and his servant, Dromio, thrived. Although the studly Antipholus of Ephesus (David Naughton) is married to Adriana (Abby Haug), the mischievous Dromio of Ephesus (Paul Rescigno) has been in a frenzied relationship with a dominating woman, Luce (Heather Orth), who likes to chase him around the room before settling down for the night with her catch. 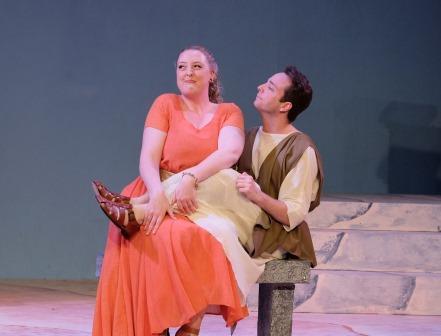 Luce (Heather Orth) and Dromio of Syracuse (Robbie Rescigno)
in a scene from The Boys From Syracuse
(Photo by: Dominic Colacchio) 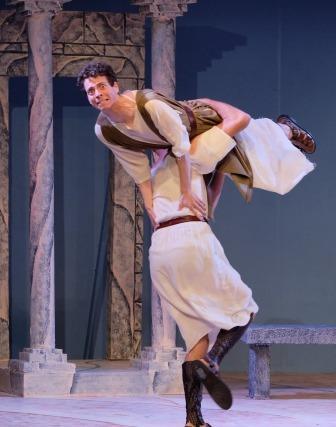 Antipholus of Ephesus (David Naughton) uses his servant, Dromio of
Ephesus (Paul Rescigno) as a battering ram in a scene from
The Boys From Syracuse (Photo by: Dominic Colacchio)

In an increasingly twisted set of mistaken identities, Antipholus of Ephesus finds himself locked out of his home while his sister-in-law, Luciana (Elise Youssef), falls for Antipholus of Syracuse. Meanwhile, Luce finds herself with not one, but two Dromios to chase after.

Throw in lots of confusion about who is going to pay the goldsmith and how the life of Aegeon (Steven Vaught), a Syracusan merchant who fathered the Antipholus twins, will be spared and there's plenty of mischief afoot. 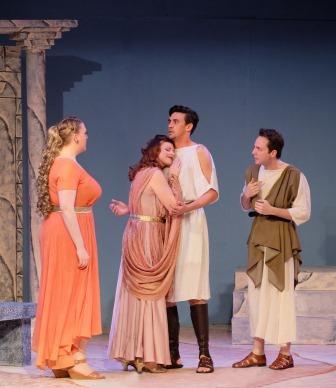 Luce (Heather Orth), Adriana (Abby Haug), Antipholus of Syracuse
(Lucas Coleman), and Dromio of Syracuse (Robbie Rescigno) in a
scene from The Boys From Syracuse (Photo by: Dominic Colacchio)

The two sets of twins got plenty of support from a hyperenergetic Kyle Stoner as the tailor, goldsmith, and magician; Mike Rhone as a police sergeant, and Dyan McBride as a courtesan who had been carrying on with Antipholus of Ephesus. Nikita Burshteyn scored strongly in small roles.

The Rodgers & Hart score includes old standards ("Falling In Love With Love," "This Can't Be Love," "You Have Cast Your Shadow on the Sea," and "The Shortest Day of the Year") as well as lesser known (but devilishly sly) numbers such as "He and She," "Come With Me," Oh, Diogenes!" and "What Do You Do With A Man?" As always, "Sing For Your Supper" (the jazzy trio for Adriana, Luce, and Luciana) triumphantly brought down the house.

With the help of Jayne Zaban's choreography and Dave Dobrusky's excellent musical direction, Greg MacKellan kept the show moving at a brisk pace. The production was nicely framed by a unit set designed by Leanna Keyes and Danny Maher that was enhanced by Stephen Smith's costumes.

During a talk back following the Easter Sunday matinee of The Boys From Syracuse, the Rescigno twins let drop an interesting piece of theatrical trivia. The two brothers had appeared in a previous production of The Comedy of Errors in which Robbie had played Dromio of Ephesus and Paul had played Dromio of Syracuse. During rehearsals and performances, both felt that they would have been better cast as the opposite Dromio. After going through rehearsals with 42nd Street Moon (in which Robbie was cast as Dromio of Syracuse and Paul was cast as Dromio of Ephesus), they admitted to feeling much more comfortable with Greg MacKellan's casting choice. 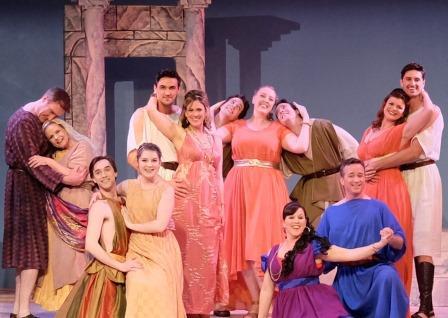 The cast of 42nd Street Moon's delightful production of
The Boys From Syracuse (Photo by: Dominic Colacchio)