The story of Doubting Thomas is a wonderful philosophical parable about seeing and believing, but what exactly is the intended moral? And what light does it shed on the relationship between science and religion?

The standard view portrays Doubting Thomas as a scientific hero demanding evidence and refusing to succumb to blind faith. Richard Dawkins has popularised this version since the publication of The Selfish Gene in 1976. Last September he tweeted, "If there's evidence, it isn't faith. Doubting Thomas, patron saint of scientists, wanted evidence. Other disciples praised for not doing so."

But this is not an entirely convincing interpretation either of the bible or of the nature of scientific knowledge.

In John's gospel, the other disciples tell Thomas: "We have seen the Lord." Thomas is not convinced: "Unless I see in his hands the print of the nails, and place my finger in the mark of the nails, and place my hand in his side, I will not believe." A week later Jesus appears to all the disciples, and addresses Thomas: "Put your finger here, and see my hands; and put out your hand and place it in my side; do not be faithless, but believing." Thomas now believes, and Jesus comments: "Blessed are those who have not seen and yet believe."

Now, remember that according to Dawkins the story is told so that we should admire not Thomas, but the other disciples, "whose faith was so strong that they did not need evidence." What is wrong with that? Well, first of all, the other disciples believed in the resurrection not through blind faith, but because they saw the risen Jesus with their own eyes.

Dawkins is right that we are not supposed to admire Thomas's refusal to believe, but he is wrong about the reason. Thomas's behaviour really is a little irrational. What better basis for belief could he have had than the testimony of his most trusted friends? We all have to rely on testimony rather than first-hand experience for the vast majority of our knowledge.

Thomas's sin was the refusal to believe reliable testimony. The English natural philosopher and theologian John Wilkins wrote about the Doubting Thomas story in the seventeenth century. Jesus's saying 'Blessed are those who have not seen and yet believe' signified, for Wilkins, that it was 'a more excellent, commendable and blessed thing for a man to yield his assent, upon such evidence as is in itself sufficient, without insisting upon more.' The testimony of the other disciples should have been in itself sufficient for Thomas; and yet he insisted upon more. 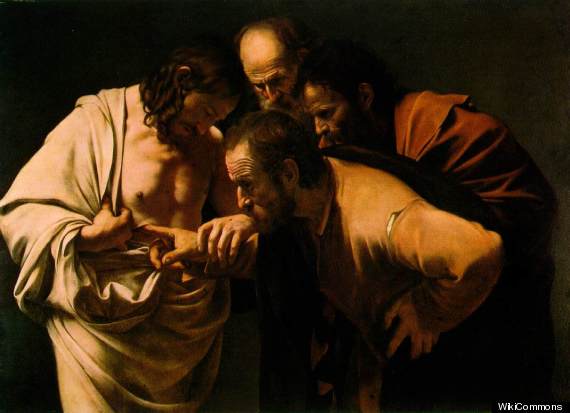 Communal observation and testimony are central to both religion and science. Caravaggio's The Incredulity of St Thomas (c. 1601-2) depicts a collective act of witnessing. Should we, perhaps, even think of Thomas's finger here as a rudimentary scientific instrument? Is he making a digital measurement? Are the other disciples there to corroborate his observations? Rembrandt's slightly later painting of an anatomy lesson (1632) can be seen as a transposition of this model to a scientific setting. In both cases, the body of an executed criminal is being probed -- in the case of Rembrandt's image, with forceps rather than just a finger -- in front of a group of witnesses, and with the aim of producing knowledge. 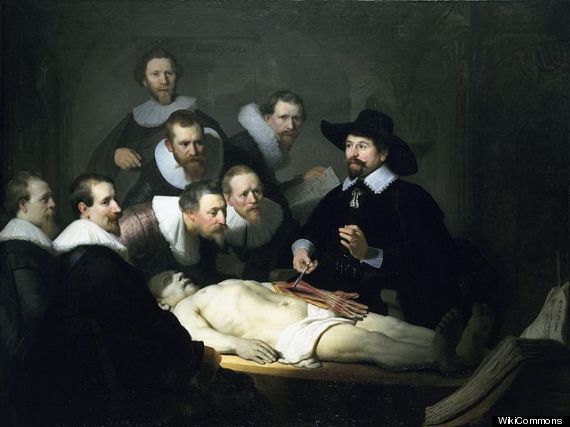 The key point here is that these images depict acts of communal knowledge-production. Scientific knowledge, like religious belief, is produced by collaborative acts of observation which, in turn, rely on the observations, testimony and inferences of others.
Richard Dawkins suggests that Doubting Thomas should be the patron saint of scientists. In fact he is patron saint of the blind, which is perhaps more fitting. If Thomas does stand for the view that the true basis of knowledge is unaided individual sense perception, then his is indeed an unscientific world and a world of blindness -- a world where, in a phrase of Galileo's, "one wanders in vain through a dark labyrinth." Galileo admired those who believed in the sun-centred system before the advent of the telescope: "They have by sheer force of intellect done such violence to their own senses as to prefer what reason told them over that which sense experience plainly showed them to be the case." Blessed, you might say, are those who have not seen and yet believe.

Returning to Caravaggio's painting, we see Thomas, his hand being taken by Christ and placed in the wound in his side. Thomas's eyes are dark, glazed, blank; he is gazing straight ahead, not at the wound. This is indeed a depiction of a blind man - a man being led by the hand towards something he cannot see. Caravaggio seems to say that the man who seeks to base all his knowledge on individual sense experience will see nothing. In both religion and science, the most important beliefs rest on a kind of seeing that cannot be done by an individual alone, that cannot be done with unaided human eyes, and that cannot be done without belief in an unseen realm.

This article originally appeared on the Oxford University Press Blog. Dr. Dixon is the author of Science and Religion: A Very Short Introduction.

Top Scientists On God: Who Believes, Who Doesn&#039;t