On an island collapsing under stress hordes of artists, collectors, honeymooners and the business end of art convened for another biennale. The diseased waterfront palazzos with flaking facades, leonine doorknockers and rusting, shackled iron pylons are from a bygone era at odds with modernity. Today the slow drift of a traghetto is embarrassed by the wake of a speeding taxi ferrying the elegant elite on their palazzo hopping. 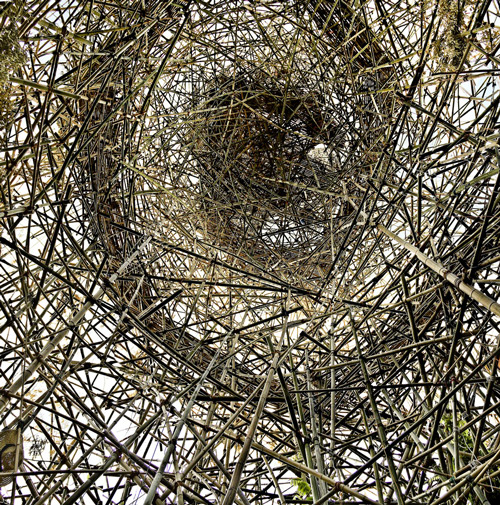 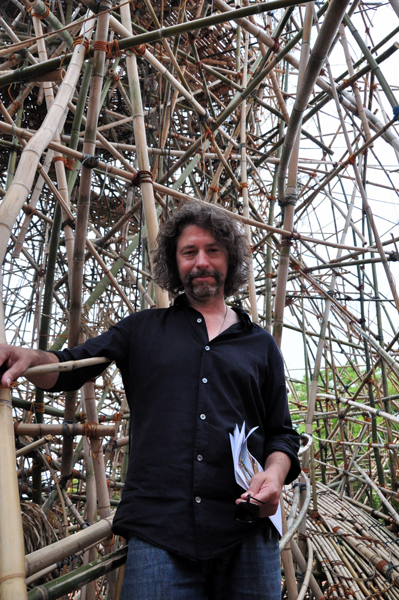 The piazzas, once browsed by Byronesque poets sipping port, penning novellas, are often knee-deep now in seawater. Death in Venice is no longer a quiet option. While TB is not a menace to Venice, it's been damned by tourists to a fast-sinking fate, propped up for the festivities till we come up with ways to see art underwater.

Venice has a way of absorbing the past and rising above it like it does around Peggy Guggenheim's palazzo by the Grand Canal. The collection, a crucible of a few seconds of Venetian history; a dalliance into modernism, this year, was flanked by the massive tabernacle of the Starn twins' bamboo-sculpture plotting its way skywards. The thorny bouquet of bamboo poles soared above the skyline of palazzos on the Grand Canal for those not too busy to look at the stars. 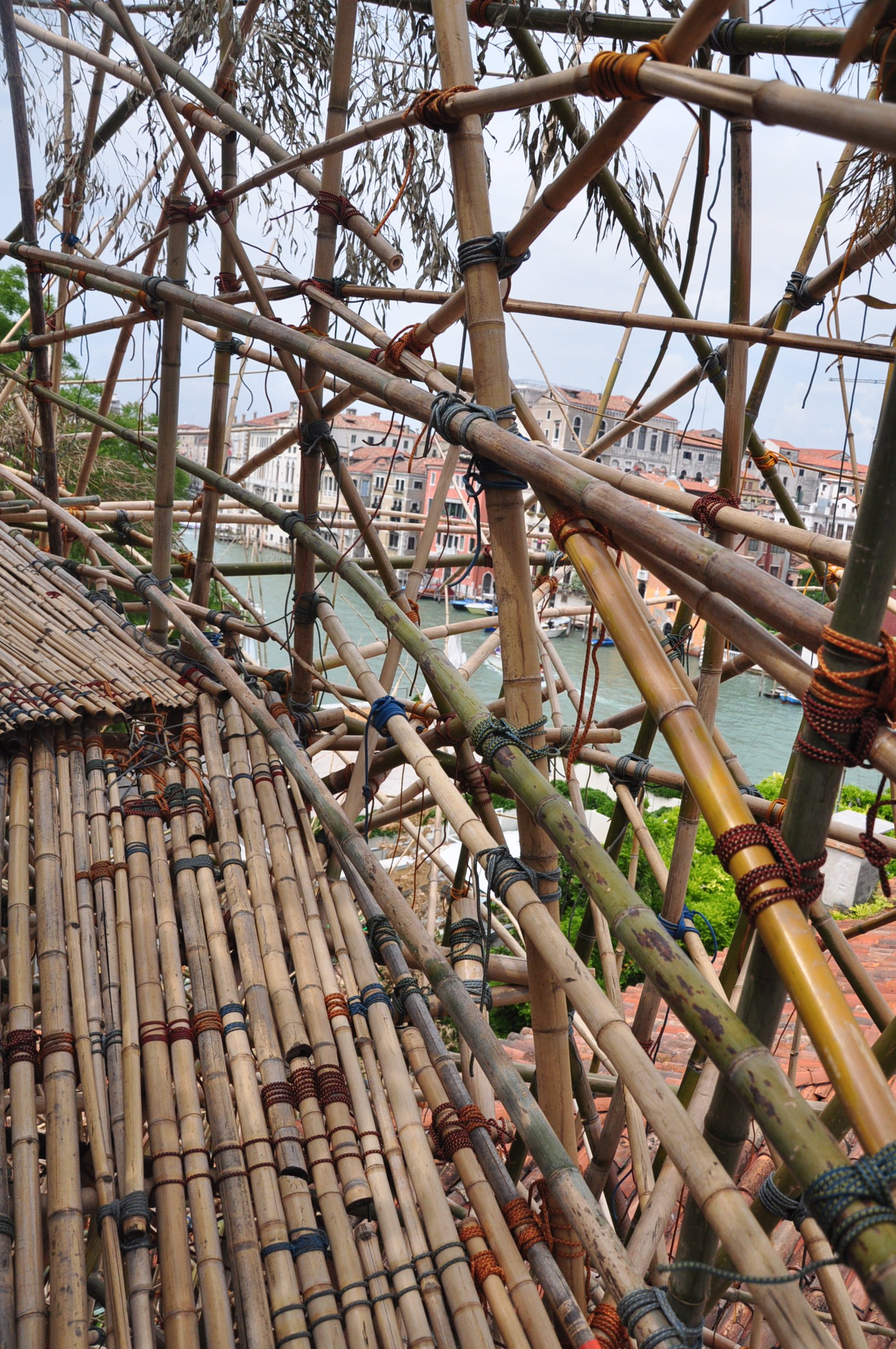 Mike and Doug Starn had first exhibited the Big Bambú on the Metropolitan Museum's rooftop in New York last year, and its Venetian spawn, sanctioned just in time for the biennale, rises in the courtyard of Casa Artom next to Guggenheim's palazzo. Spiraling up in organic free-form it branches like a tree, in repeating fractals that reached a height of 50 feet, coinciding exactly with the brothers' 50th birthdays in Venice. The sculpted, knotted poles are always a work in progress and continues to rise higher with the help of a maverick crew of 11 who tethered more than 3000 poles with coloured rope used in professional rock climbing.

I ran into Mike Starn on the ferry to Arsenale and asked whether the bamboo scaffolding, commonly used in Asia, had inspired him. In fact he had discovered those much later he said, inspired originally by rock climbing and the idea of chaotic interdependence. The sculpture's growth is intuitively engineered, based on the experience of weight and balance felt through each step of the evolutionary spiral, much like the building segments of microorganisms and macro human social structures. He considered the poles reused from the original Met Museum exhibit as 'stem cells' for further proliferation.

There is playfulness to the construct; a treetop perch above the cityscape. Participation included a signed waiver and willingness to be vertiginously challenged. The springy platform at the top with cushions for seating had the vibe of a chill Thai or Balinese hangout.

Starn said he thought it might rise another twenty five feet before closing day on June 18th after which it would be dismembered limb by limb, and the sculpted tree made to defoliate, as with waves of winter senescence that strikes the planet every season. 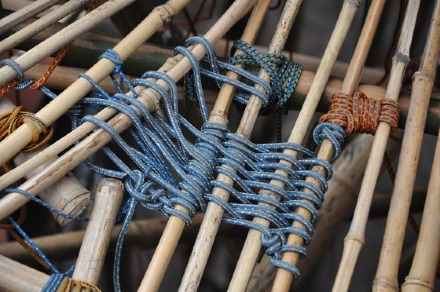 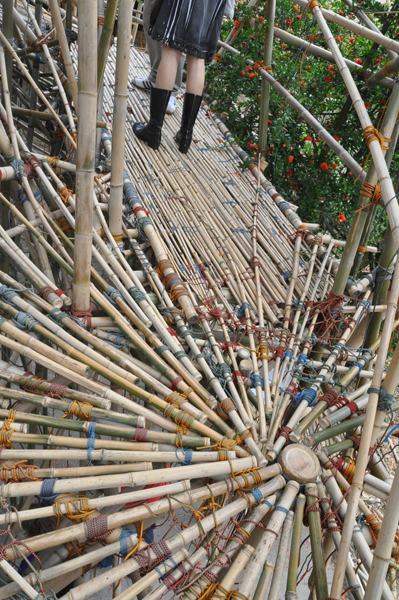 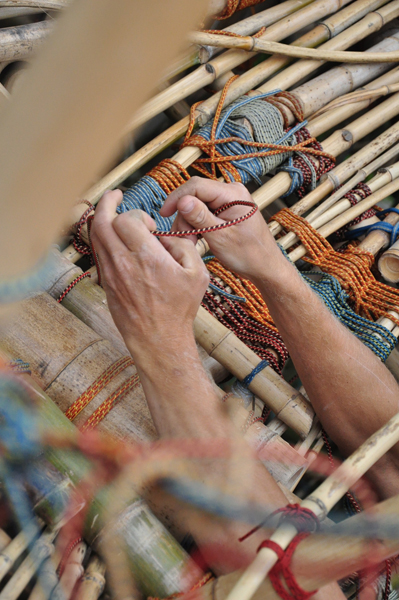 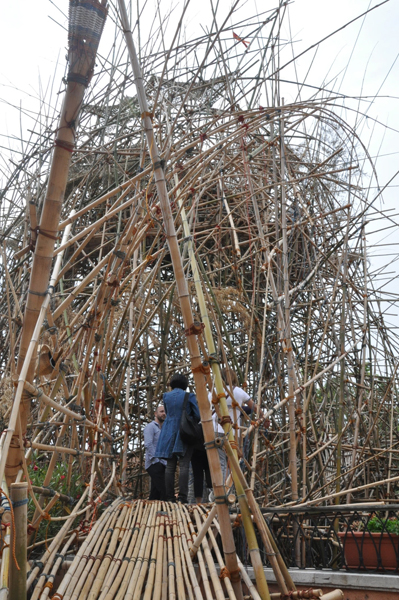 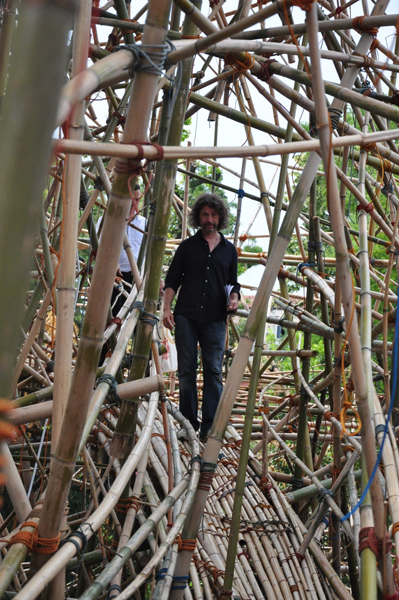 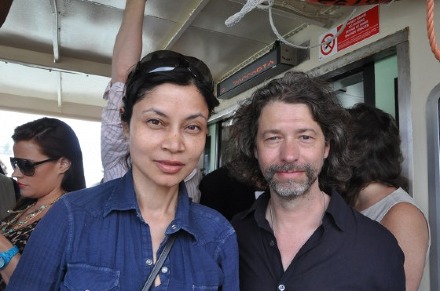 Kisa Lala and Mike Starn on the ferry to Arsenale, Venice 2011 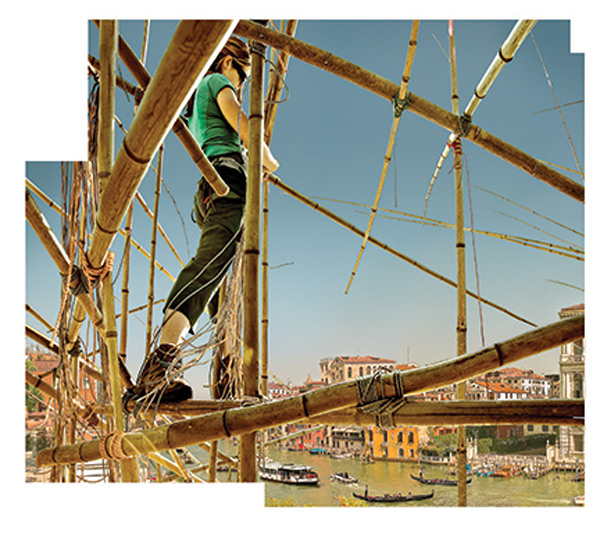 MIKE + DOUG STARN, BIG BAMBÚ, a special project of GLASSTRESS
Official Collateral Exhibition of the 54th Venice Biennale
On Public View May 29th through June 18th Next to the Peggy Guggenheim Collection, 700 Dosoduro On the Grand Canal, boat arrivals welcome