Do women see themselves less accurately than strangers do? A new Dove campaign says yes -- and offers proof, in the form of forensic sketches.

Dove recruited seven women of different ages and backgrounds and had FBI-trained forensic artist Gil Zamora create composite sketches of them based on descriptions of their own facial features. In the above video, produced for the campaign, you can hear the women use phrases like "my mom told me I had a big jaw," "I kind of have a fat, rounder face," "I'd say I have a pretty big forehead."

"We really weren't sure what was going on," Kela Cabrales, a 40-year-old technology teacher and digital artist who appears in the video, told HuffPost Women. "They asked me to describe myself and use neutral terms and 'just the facts' sort of descriptions."

Earlier in the day, the women had been asked to spend time with strangers, though neither party was told why. These strangers were later brought one by one into a room with Zamora and asked to describe the women who had been sketched earlier. The two resulting drawings of each woman were then hung side-by-side -- and the contrast is pretty stark. The tagline of the campaign is: "You are more beautiful than you think." (Scroll down for more of the sketches.) 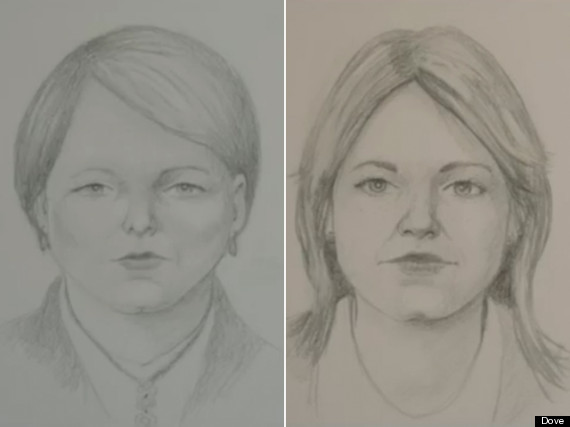 It's worth noting that Dove is owned by Unilever -- the same company that owns Axe, king of misogynistic ads that use headless breasts and "flirty girls" to hawk its products. However, despite the obvious commercial intentions behind this campaign, the message rings true and is a refreshing departure from the many female-targeted ads that try to shame women into buying things.

And it's women's existing shame that the Dove campaign does a good job of exposing through its sketches. "I probably beat myself up way more than I should," Cabrales acknowledged to HuffPost Women. "I see my 8-year-old daughter, and she’s so happy and confident, and naturally exudes this beauty. And when I see her I feel like, 'Oh god, what pitfalls did I fall into, and how can I keep that from happening to her?' I don’t know what they are -- I wish I did. I really want to protect her."