And yet the resounding cry you hear across the land in response to this epic achievement is, "Who cares?"

"Usually, around a notable market event like Dow 15,000, the punditry is falling over itself trying to be heard," writes my former colleague Paul Vigna at the Wall Street Journal's spanking-new MoneyBeat blog. "Instead, all we are hearing over here at MoneyBeat is crickets."

These indices first crossed into record territory back in March. The Dow went first, followed by the broader S&P 500. After a brief swoon in April, both indices have recently gotten back to setting record highs pretty much every day. The records didn't matter two months ago, and they still don't matter. (Story continues after graphic.) 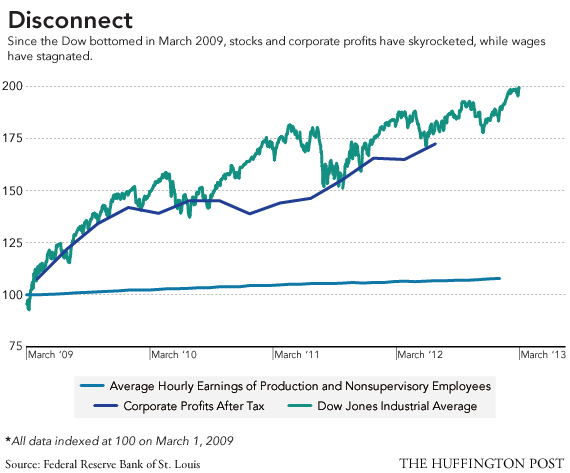 As for the Dow, it is a bizarre anachronism that tracks only 30 companies. Its components are weighted by price, making it even more useless. The broader S&P 500 is a better measure of the stock market, but it is still a poor reflection of the economy.

That is because, even as stock prices and corporate profits have soared to new records, "human beings" have been left behind. The unemployment rate, at 7.5 percent, is still well above its pre-recession levels. Wages have stagnated, as you can see in the giant graphic above.

Much of the market's gains in the past few years have been due to the Federal Reserve making money cheap and keeping interest rates low, forcing investors into riskier assets like stocks.

Meanwhile, investors are still suffering from post-traumatic stress following two massive bubbles and bursts -- first in stocks, then in housing, in less than two decades. They can be forgiven -- nay, encouraged -- for being slow to break out the party hats and "Dow 15,000" goggles.

There's a risk of being too cynical and dour about the market. New records are far, far preferable to new lows. Haters have hated on this rally ever since it began back in early 2009, and many of them have missed out on big gains as a result. Still, under the circumstances, with so few people actually enjoying the spoils, the sober response makes sense.

The Best Performing Stocks Of 2012