Scroll down for chart

For the first time in over a year, the Dow Jones Industrial Index briefly hit 10,000. While much of the economy is still languishing -- for one, unemployment hit 9.8 percent earlier this month -- the Dow has risen roughly 50 percent since March.

Whether the Dow breaking the 10,000 barrier is a good indicator of the larger economy -- or just Wall Street's recent turnaround -- is a matter for debate. Judging by the stock market alone, the economy seems to be inching its way toward a recovery.

The broader indexes have risen even more sharply from their lows than the Dow, with the Standard & Poor's 500-stock index up about 58 percent, and the tech-heavy Nasdaq up about 66 percent.

Economists are heartened in particular by how the markets are moving upward rather steadily, which suggests that they could hold onto their gains.

"We haven't seen wild up-and-down moves in the market," says Brian Bethune, the chief U.S. financial economist for IHS Global Insight, an economic forecasting firm. "The tenor looks good -- not anything that would suggest any pathology that we're going one way or the other to excess."

The Huffington Post spoke to David Denslow Jr., Research Economist for the Bureau of Economic and Business Research, about the Dow's recent resurgence and its relation to employment levels. Denslow pointed out that the stock market is typically a leading indicator of the larger economy. In this case, Denslow said, the disparity between unemployment and the stock market's performance seems to be more pronounced.

"It takes quite a while," Denslow said, "before employers start hiring again because they're sufficiently convinced that times are going to get good. In this case in particular, according to the conventional wisdom at least, most forecasts expect quite a lag before the unemployment
rate comes down, with the consensus forecast being that it's going to peak sometime in early 2010."

But what's striking about the performance of the Dow compared to the unemployment rate is how they seem to be moving in parallel during the recession, with the Dow up almost 50 percent and unemployment rising nearly 30 percent. That contrasts with the somewhat inverse relationship between the Dow and the job market from 1998 to 2008.

This may be part of the reason why, then, that at MarketWatch Mark Hulbert reports that the Dow 10K mania is not necessarily shared by all of Wall Street's investors. Pointing to "a wall of worry" among some market professionals, Hulbert reports that mutual fund managers are, on the whole, betting against the Dow's continued resurgence:

Perhaps the most compelling evidence of that strong wall of worry comes from the mutual fund arena. In September, investors actually pulled more money out of domestic equity mutual funds than they put back in -- even as the stock market hit new 2009 highs. This net outflow of funds has continued for the first half of October, as well.

Denslow, for his part, said he was optimistic that the Dow would continue to rise modestly, but cautioned against any Dow 10k fervor for average investors: "GDP probably has turned around, the stock market has come back. Those are good signs, but they're not all that pleasing when you don't have a job. My hypothesis is that we can't really tell which way [the market] is going to go."

Click here to see a larger image of the following chart: 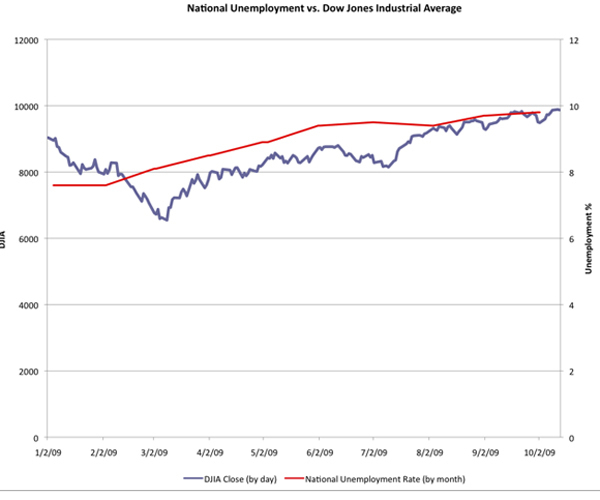