A United Nations convoy, traveling through the war zone of the Eastern Ukraine, was about to bring relief to starving and cold hospital patients.

Food parcels from the UN World Food Programme (WFP) were on board. The charity International Relief and Development (IRD), with more supplies, was helping lead this life-saving mission.

They had to hurry. The situation was looking bleak in the area of Luhansk, where the government and the pro-Russian rebels were at a standoff. The UN reports,

Within Luhansk oblast, reports from NGOs continue to identify food needs within institutions-especially for the disabled and other long-term patients. To date, food supplies have been scarce, and replenishments are unreliable from the already-stretched local community.

Both government forces and the rebels were letting the convoy go through. But there was another obstacle close to their destination, a partially collapsed bridge. It was another casualty of war. Trucks could not pass. 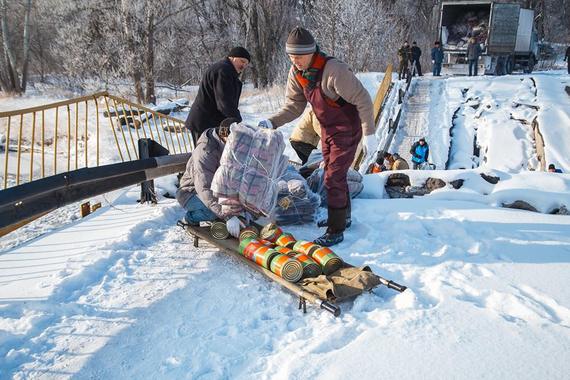 In the snow, aid workers, civilians and hospital staff carried the goods by hand across the broken bridge. Noelle Wright of IRD reports the unloading of supplies took 6 hours. But these were supplies that were desperately needed. Wright says,

"Patients were starving and there was an urgent need for heaters, warm clothing, blankets, and hygiene items."

This is what war is. Its cruelty goes beyond the battlefield and into communities. Even the young, the sick and the disabled feel the pain. Often it's through the scarcity of basic goods.

War means hunger and cold. With Ukraine's conflict, close to a million people have been forced from their homes. Some have fled into neighboring countries. Many others are still within the conflict zones.

The UN Food and Agriculture Organization says that food reserves are pretty much gone from these parts of the Eastern Ukraine. This is a region that been under siege for so long, they do not have anything left to fall back on.

Aid agencies like the WFP have been called into the Ukraine for the first time in their history. WFP will try to feed 120,000 war victims over the next 6 months.

The UN food agency is already providing food vouchers to displaced persons. This allows people, who have little or no money, to buy food from shops in the host community. This also helps the shop owners, who are also reeling the from the economic tragedy of war.

But if the war in Ukraine does not end soon, many more will need food and other aid. WFP is already stretched to the limit feeding victims of the wars in Syria, Iraq and elsewhere. They are short on funding for their Ukraine mission.

More fighting will not resolve anything in the Ukraine. It could though lead to famine, if there is an escalation of fighting. We have seen this in Syria, where people have died not just from shelling, but also from malnutrition during the almost four years of civil war.

If a peace agreement and withdrawal of military forces could be reached in Ukraine, reconstruction could begin. People's livelihoods and homes could be rebuilt with enough help.

The Ukraine can still be saved. Or it could plunge into chaos. That is the choice leaders from both sides will make in the coming days, peace or war and hunger.