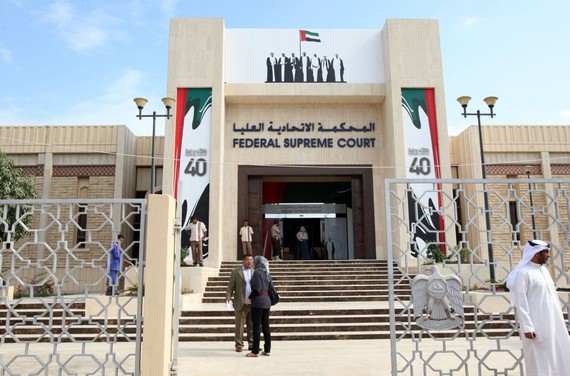 Two years ago, agents from the United Arab Emirates' (UAE) State Security kidnapped my father in Dubai, where our family was on vacation. I was just 16-years-old and had no idea what would happen to him. No one did. 550 days later, we found out that the UAE government accused my father, Salim Alaradi, of supporting terrorism in Libya. This meant that, if convicted, my father, a Libyan-born Canadian citizen, could receive the death penalty.

The UAE's State Security built their case against my father by torturing him. They forcefully extracted "confessions" from him that have been proven to be a sham. There is no further evidence except these pages upon pages of forced confessions. Knowing that their case against him was unraveling, at the peak of the trial the prosecutor abruptly downgraded the charges from assisting terrorism to sending supplies to Libyan groups, and collecting donations without the UAE government's permission.

Much of the media called this downgrading a positive development, but is it really? This change by the prosecution is further confirmation of how hollow the case against my father really is. Why would they downgrade the charges if State Security was so confident that my father "confessed" to his crime? Why would they change their tune now since they were so sure of my father's guilt? One would think that after 550 days of imprisonment, torture, mistreatment and denial of justice that the prosecution would at least know what kind of case it wanted to pursue against my father. This recent alteration is just more proof that my father's case has always been political and that the UAE's State Security needs to be reigned back into the realm of law and order. Lawyers are confirming that this sudden change of events is only an attempt by the prosecution to force a guilty verdict and to deprive him of his innocence and freedom at all costs.

My father was charged along with several other Libyan men, and a few of them have already been released from the UAE's notorious secret prison system while several others were acquitted just last week. As a result of the acquittal in an identical case, the State Security's prosecutor realized that unless he downgrades the charges, my father and the other defendants will be acquitted as well. This is a move that breaches due process and amounts to an obstruction of justice.

The State Security knows that its reputation and authority is on the line here, as it has already become a black mark on the UAE's image. Numerous international human rights organizations such as Human Rights Watch have routinely criticized the State Security's conduct. Successfully convicting my father of a crime would help the State Security justify its impunity, thus preserving whatever is left of the its claim to being the legitimate protector of the UAE's national security. Although UAE judges acquitted several defendants in a similar case last week, the prosecution is still hoping that these judges will buy into this new move in the case of my father.

My father has become a pawn in this political game. He is a Canadian citizen, a businessman, and the father of five children. He has a lot to live for and the UAE's State Security is willing to ignore these realities, all for the sake of petty politics. Despite the downgraded charges, my father remains unjustly persecuted and his freedom unfairly taken away by a foreign government. And even though the Canadian government has assured us that they've brought up my father's case to the UAE in high level talks, my hope is that Prime Minister Justin Trudeau will find it within himself to do the right thing and step in personally to call for justice.

His voice is critical to my father's freedom, as it is the only sure way of raising the profile of this injustice in a way that'll yield an adequate response from the UAE government. I have tried to get the Prime Minister's attention multiple times, all to no avail. I have made a video on Youtube (it has received thousands of views) and have spoken directly to the UN about my father's plight.

Instead of getting a response from the PM, I recently saw a "selfie" on his Twitter page that showed him posing with the UAE's Ambassador to the UN. Seeing this really tore me apart, as I thought of my father, a man who, along with many other Canadians, has been tortured by the UAE's State Security agents. 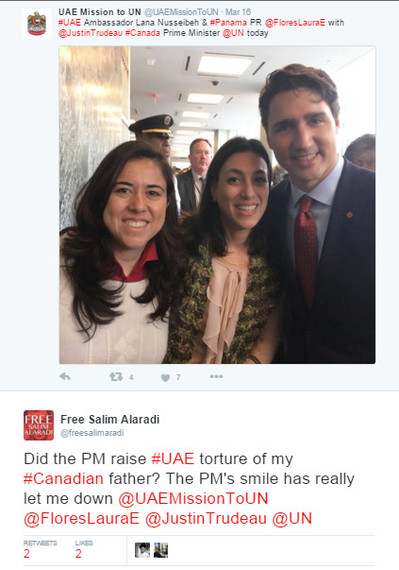 My family and I put a lot of hope into the Liberal Party's promise for "Real Change," but we've yet to taste any of it. My father's case represents the kind of blatant injustice that should anger anyone who takes Canadian values seriously. As the global representative of these values, Prime Minister Trudeau has a civic duty to speak out on behalf of my father, a Canadian citizen, and anyone else who suffers under similar circumstances.

We've so far heard nothing but silence from the PM and it's difficult to put my family's disappointment into words. Yet this will not stop me from appealing to them to do the right thing here, to do their job and stand up for the rights of Canadians, starting with my father. But on April 11 2016 my father's legal team is ready for their defense and strongly believes that justice will be served by the UAE judiciary and my father will return home soon. But my fight continues until then.