Since joining HuffPost as a blogger last March, I have gotten at most 20-25 comments on any one of my blog posts. This tells me one of four things: 1) I'm not doing a good enough job attracting a readership, 2) I have a decent readership, but a crowd that doesn't comment for various reasons, 3) I'm not writing about things that people are passionate about, or 4) I'm doing a miserable job on all counts. I like to think that Number 4 isn't an option, because if it were, I would need to reassess my life and possibly enter therapy.

Thanks in large measure to last post, "It's Time to Provide Weapons to Ukraine," I'm starting to lean towards Number 3: that is, I simply need to do a better job posting on subjects that cause people across the political spectrum to get outraged and/or engaged. Columnists thrive when they write about controversial topics (when is the last time you saw a columnist on the set of Morning Joe talking about the intricacies and details of federal tax law?), so it's something for young, naive, bloggers like me to take a second look at.

Less than 48 hours since my post on Ukraine was published, I've gotten roughly 120 comments sprouting views from "the U.S. should mind its own business, it's not America's problem," to "you are one of the worst commentators/analysts that I have ever had the privilege of reading." The whole premise of my article -- i.e. that Russia's blatant escalation in Eastern Ukraine and shredding of the Minsk ceasefire accords signed last September should force a serious and dramatic rethink and execution of U.S. policy in that region of the world -- rubbed a lot of people the wrong way. So, without backtracking on my earlier post, I feel it's necessary to acknowledge and embrace what many readers have expressed as reservations towards this approach. The concerns about pouring more arms into an already bloody conflict -- and the possibility that Vladimir Putin will double down rather than lessen support for the separatists -- are perfectly legitimate and smart concerns to have. Indeed, this is precisely why the Obama administration has not tasked the Pentagon to send defensive weapons and equipment to the Ukrainians so far -- 10 months after the conflict started. 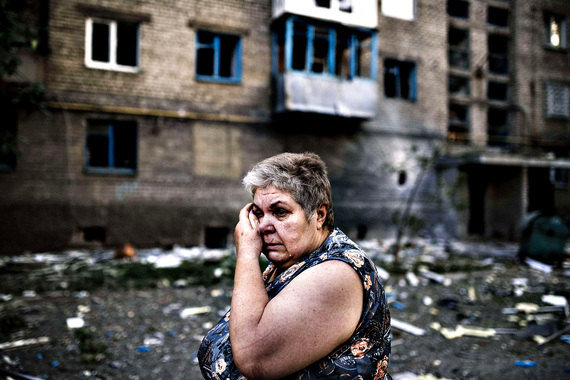 So, without further delay, here are the downsides/risks/costs of actually going ahead and authorizing U.S. arms to the Ukrainians:

1 - Putin Could Escalate: The whole purpose of providing the Ukrainian army with the guns, enablers, surveillance assets, and weapons platforms that they need to defend themselves is to increase the cost of Russia's behavior and force Moscow to reconsider whether actively backing the separatists is worth the cost of collecting more dead Russian soldiers. But, as in life, there is no guarantee that this deterrence effect will work: in fact, Putin may make the opposite calculation. As Professor Sean Kay writes for War on the Rocks, "There is every reason to believe that Russia would respond not with negotiation, but perhaps with more, and even deadlier, war."

2 - U.S.-E.U. Division: The main reason economic sanctions against Russia have produced such hurt on Moscow is not because the restrictions are especially harsh (the Russians are still selling weapons platforms, arms, and oil around the world) but because the United States and the European Union are lock-step on the sanctions that they have passed. Without this unity, it's difficult to see Russia losing a projected $140 billion this year, or the Russian economy losing tens of billions of dollars in foreign investment as a result of capital flight. U.S. defense exports to the Ukrainian army, even if for defensive purposes, could strain a coalition between a Europe that doesn't want further violence and an administration in Washington that is sick and tired of Russia and its proxies mocking ceasefires.

4 - The Russian Army Is Too Powerful: In a conventional conflict with Russia, the Ukrainian military would be wiped out. Much of Ukraine's equipment is Soviet-era that don't work, break down, or are no match for the big defense industry that Moscow boasts on its own soil. Providing a couple billion dollars in weapons to Kiev will not alter that disparity. Russian forces would still overpower Ukrainian units in the field, kill a lot of Ukrainian soldiers, and expose the Ukrainian military as a third-rate force with mismatching uniforms, aging weapons, and a corrupt or incompetent command. So, why bother?

These are just four reasons why a large cross-section of Americans, Europeans, Ukrainians, and Russians label a further militarization of the Ukrainian conflict as a bad idea. They are all valid, they are based on accurate readings of past conflicts, and they are no doubt being batted in the minds of policymakers in the Obama administration as we speak. But there are risks to every single policy option, including the policy that Washington is now implementing.

None of us have all the answers.