As much as fans looked forward to the second season finale of "Downton Abbey" on Sunday night, it was also a day of dread; season three won't appear on PBS until 2013.

To cope with the withdrawal, fans have a few unexpected options (besides watching Season 1 on Netflix over and over again): "Downton Abbey" paper dolls and even trading cards of their favorite characters. It's a markedly girlish approach to the show's merchandising, but not totally off base. I was thinking as I savored every last moment of the finale that the fervor around the Crawley sisters calls to mind an earlier historically-themed obsession many of my female friends shared once upon a time. That's right, I'm talking about The American Girl dolls.

I'll be the first to admit that the dolls' allure had a lot to do with their stuff, and their owners were a privileged set -- that demographic of female Gen Yers whose parents were willing and able to pay $82 for a plastic doll with historically-accurate accessories. But I don't think The American Girls would have been nearly as appealing if not for the books they were attached to. While "Meet Kiersten" and "Changes for Felicity" weren't scholarly works by any means, the adventures of The American Girls were for many of us first encounters with concepts like inequality and injustice and the idea that even girls could make a difference. We read about Addy Walker's escape from slavery to freedom with her mother and, on a lesser scale, Molly McIntire's Victory Garden in World War II and Felicity Merriman's refusal to drink tea in Revolutionary-era Williamsburg. Even if some of us didn't absorb the larger lessons, the books confirmed that "the olden days" had been so much more interesting than anything since.

Which doesn't sound that different what a certain Masterpiece Classics series offers that demographic fifteen or twenty years later. Sure, the Crawley sisters are British (small detail), but like The American Girls, they wrestle with finding their independence in the face of changing social mores. They are smart, resourceful and don't always tell their parents every little thing -- though the adults in their lives dote upon and respect them for their choices in the end. In short, they are Just Like Us -- if we had only lived in the Olden Days, in a manor house, with period gowns and those killer accessories. (Forget the paper dolls -- I'm waiting for the release of "Mary Crawley's Seduce A Turk Nightgown" in my size.)

While Sybil's suffragette defiance most strongly embodies what all The American Girls stood for, each Crawley sister has an American Girl predecessor in my friend's hearts. Here's my take on who the three Crawley sisters are in American-Girl speak -- and their best "Saves The Day" and "Learns A Lesson" moments: 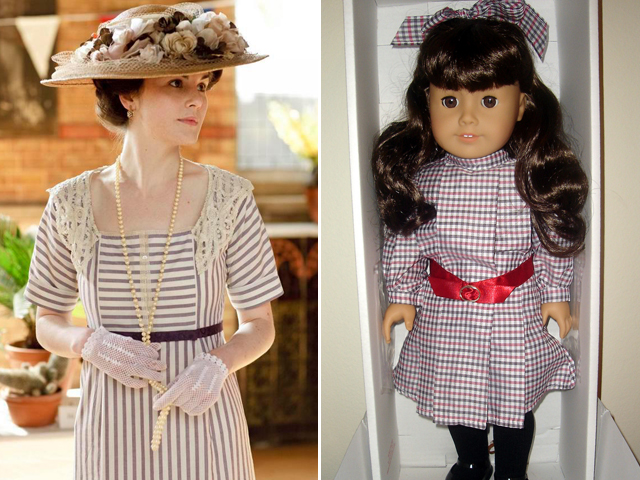 Like Mary Crawley, Samantha Parkington is the "pretty one" that gets all the attention -- every little girl aspired to be like (or at least own) Samantha: A young woman well-positioned in the world, confident and doted upon. As The Hairpin's Chiara Attik put it:

By virtue of acquiring a status symbol early on (a Samantha doll was the designer jeans of third grade), you never quite had to worry about things the way other girls did. You therefore grew up to be confidant, capable, and nonplussed. You've always been well liked. You aren't the funniest in your group, but you've never really noticed or cared. If you thought about it, you could probably recognize other women who had Samanthas. But that's not that impressive: everybody can.

Mary Crawley is to "Downton Abbey" what Samantha was to little girls: she gets all the suitors and screen time. Even breaking the worst social taboos can't wrest her from her place in the world -- and our hearts.

"Learns A Lesson" Moment: Spoilsports
The adult equivalent of having Eddie Ryland sprinkle salt in the ice cream at your birthday party? Having your sister rat you out to the Turkish consulate.

"Saves The Day" Moment: Hiding The Maid
Samantha (at virtually no risk to herself, granted) rescued Nellie, the maid she befriended, from an orphanage and hid her in her home. Adult equivalent: Scoring your maid, Anna Smith, a "bridal suite" in your parents' house for her wedding night (I mean, Anna did drag the dead body of your lover for you -- you kind of owed her one, Mary Crawley). 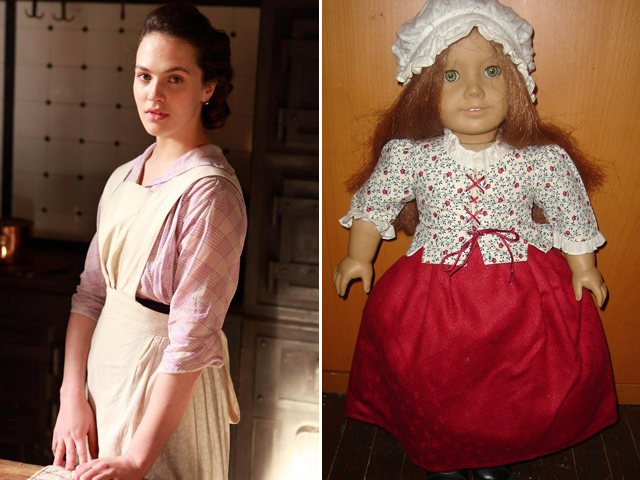 Sybil and Felicity are the "free spirits" in the family, whose sense of right and wrong often bring them into conflict with their parents and society. Felicity's rebellion against uncomfortable "stays" is the predecessor of Sybil's "harem pant" moment.

"Learns A Lesson" Moment: Politics Can't Stand In Love's Way
Felicity was separated from her best friend, Lizzie, because Lizzie's family was loyal to the British Crown. She struggles with the idea of breaking with her family and their politics to continue the friendship, though ultimately finds that she's able to get away with supporting her friend and maintaining her family's love. In a more high-stakes version of Felicity's conflict, Sybil opts to move to Ireland and marry her Irish socialist chauffeur beau. The Crawley sisters still attend the wedding, showing that politics don't have to come between friends and family -- if you have an open-minded daughter to persuade you otherwise.

"Saves The Day" Moment: Open Minds Win Over Closed Hearts
Felicity's cause celebre -- the humane treatment of horses, and Jiggy Nye's in particular -- is the equivalent of Sybil's commitment to politics. In both cases, their parents found out, but ultimately learned a lesson from their more large-hearted daughters. 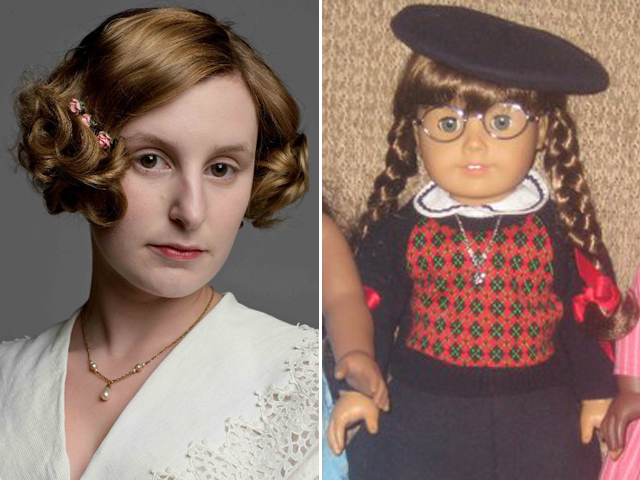 Poor Edith is often overlooked for her more beautiful (and drama-courting) sisters -- by suitors and "Downton Abbey" viewers alike. The Hairpin's description of what owning Molly said about your personality might as well describe an adult woman sympathizing with Edith: "If you had Molly, you probably wanted Samantha instead, but contented yourself with Molly because you too ... would concoct various schemes to get attention." Edith's letter to the Turkish consulate about Mary's scandal was nothing if not a cry for attention.

"Saves The Day" Moment: Wartime Green Thumb
During World War II, Molly grew a Victory Garden to support the war effort at home while her father was fighting overseas. With the men away fighting in the trenches during World War I, Edith, too, gets her hands dirty, helping out at a local farm near her family's estate. (Well, until her tractor driving attracts the amorous attention of the married farmer she's helping. Who knew gardening could be so fraught with temptation?)

"Learns A Lesson" Moment: Spying Never Works Out
"Molly Learns A Lesson" opens with Molly feeling bad about herself and her "mousy" brown locks. When she doesn't think a school project will be successful, she gets her friends to spy on the competition with her -- with disastrous results.

Openly jealous of her older sister, Mary, Edith's anger comes to a point after overhearing Mary tell their mother that Edith cannot even secure her castoff suitors. To get payback, Edith snoops into Mary's love life, though what she finds threatens to bring ruin upon the whole family -- and ultimately draws the sisters closer together.