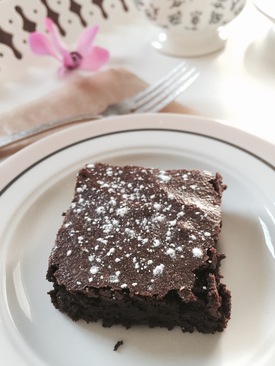 Downton Abbey may have left me, but I'm still living it.

My relationship with Downton is complicated -- as a nerdy Masterpiece TV regular-type, I happened to catch the pilot, not having heard any buzz, British or otherwise. After five minutes, I put down the paperwork I was doing and announced to the fam: Whoa, back up. This is not a show for multi-tasking. This is beautiful. Like, Merchant and Ivory beautiful.

And so we sat, captivated, with our adolescent daughters on Sunday evenings and ate warm scones or browned butter brownies, which we affectionately dubbed Downton Abbey brownies, and drank our Darjeeling.

But then Bates was accused of murder, and ditto for his wife the following season, and it became clear that Julian Fellowes had officially jumped the shark. My more loyal friends who were DA fans said what freaking shark? and argued that, in show number three, a dashing Turkish diplomat dies in the heat of the moment in maiden Mary's bed. Fair enough, but I was put out with the whole lot of them--upstairs and down--so I quit and survived on reruns of Lark Rise to Candleford.

But the Crawleys' world kept turning, and eventually, I caught up and came back. How could I not?

And now the curtain's closed on the whole deal, and the planet seems a cold, hard place. No more condescending Carson or marvelous Maggie Smith or that conniving Barrow--what's one to do? Watch The Walking Dead?

Indeed, Downton has deserted us, but leaving its indelible mark. This English rose will endure, always blooming in anglophile hearts. Here are 6 Downton Abbey take-aways, take them or leave them:

Evolve, or else. Robert Crawley has a rep as a stick-in-the-mud, but, crikey, he comes round quickly. Gone with the wind go the glory days of owning land, and though his lordship grumbles, he does, in the end, entertain the newfangled ideas of his juniors. Why, in the final season we witness him agreeing to open the abbey to oglers and accepting his born-out-of-wedlock granddaughter, both in the space of about half an episode. Progressive the earl and his brood are not, but while some of their peers rail against the crumbling system, the DA family wax philosophical over brandy. It wouldn't have been as fun to see the Crawley crew grow increasingly bitter, just like it's no fun listening to your great aunt gripe about your generation going to hell in a hand basket. The times, they're always a changin'.

Beauty matters. We can't all live among green hills dotted with sheep and stone walls, which, in my book, is one of life's great injustices. But bully for us when we dress artfully (who didn't watch DA partly just for the clothes?) or arrange items on top of our nightstand just so or grow geraniums in the kitchen windowsill. Our eyes are happy when fed candy. It doesn't take a dowry to do things up--look how Carson and Hughes' wedding reception came off so charmingly in the village schoolhouse, with paper garlands and cottage flowers. Even pig farms, or especially pig farms, appear picturesque on DA. Bright spots of beauty lift our spirits, even our postmodern ones--this is one reason we slurped up Downton with a spoon. But too often we underestimate loveliness' power, forsaking it for practicality. Which leaves us feeling pretty dull.

Take tea. For God's sake, stop what you're doing and do something other than what you're doing. An Earl Grey-induced high is balm for a bad day, the icing on the cake of a good one. A company mug with a Lipton string draped over the edge while you answer email does not count. Brew a proper pot and grab a corner of the office with a window or a book or, at home, your kids coming off the school bus. I promise, this little ceremony will get you through until the glass of wine with dinner. After all, the English did not build an empire on Diet Mountain Dew.

Dress for dinner. Before you think I'm totally bonkers, I'm not advocating pearls with your pot roast. But if you're dressed for the day, consider staying dressed while you're frying up the bacon (grab an apron). Your family will still function in sweats, but forgoing the workout wear at the evening meal adds an air of specialness, of gratitude for the grub. Who knows? By the glow of the candles you took the trouble to light, you might even enjoy sparkling table talk with your teenagers.

'Shall we go through?' Have a cuppa after dinner, too. (Beverages are an important theme on DA.) Whether you serve up some decaf or sip on sherry or sit on the porch with a Coke, pause one more time before hitting Netflix hard or folding a last load of laundry. (Pausing is a very important theme.) Tragically, you don't have footmen for refills, but you can still enjoy a fifteen-minute conversation with the spouse or a space to digest and think long thoughts, staring at a crackling fire or the summer moon--or the wall if you like. (Even DA's busy servants sit with coffee and connect at the end of a long night.) I'll bet you start to look forward to your evenings in a way you hadn't before. You don't have to drag this out, unless you want to. Okay. Now you can get in your sweats.

Sit up straight. Your mother was right--it looks much nicer, dear. It's slimming. It best shows off your outfit. You are snickering, but seriously. Plus, straightening those shoulders helps you breathe, energizing your conversation. You'll be witty, iridescent, irresistible. Lord Grantham's ladies never let their back touch the back of a chair--probably no need to go that far. I have terrible posture, but I'm surprised at how good it feels to sometimes perch on my seat instead of becoming ensconced in it. I'm trying to pick and choose my moments for slumping. Like during repeats of Downton Abbey.