If you thought things got awkward on Downton Abbey last season when Lord Grantham came home early one night and found the weasely art dealer Mr. Bricker in his bedroom putting the moves on Lady Grantham, you learned Sunday night that things can always get awkwarder.

Uncomfortable? You could say that. Anne Boleyn was more relaxed on the morning she was beheaded. 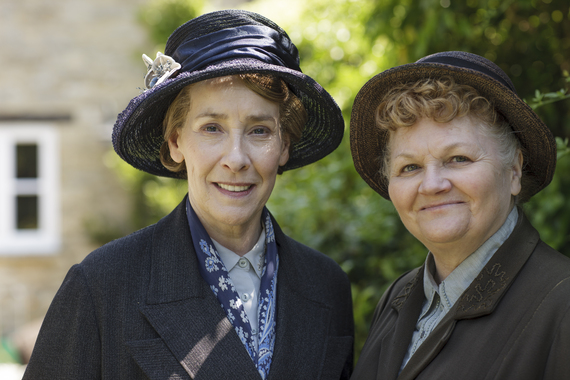 Writer Julian Fellowes took so much delight in the whole situation that he broke their discussion into three separate one-on-one vignettes, and by the time they were finished, 10 million viewers couldn't decide if they were weeping from laughter or because they needed a drink.

That was the fun part of Downton Sunday night, and since this will be the final season, we need all the fun we can get.

The more serious part, as expected, brought us back to the question of whether Downton Abbey the estate can survive the 20th century, or even the 1920s.

Lord Grantham was already fretting about the future, again, when Carson came by with word that one of the neighboring estates, Mallerton, had run out of money and was being sold.

The owner, Sir John Darnley, had slapped price tags on virtually all his possessions and thrown the doors open for a garage sale.

To the land-owning British aristocracy, this was as unthinkable as the local church putting up a sign declaring Friday nights to be a Happy Hour with half-price wine and wafers.

As the Granthams walked into Mallerton for the sale, Robert saw a portrait and exclaimed, "That's his grandmother!"

We never learned if Granny fetched more or less than the trophy for a winning Holstein.

Lord Grantham's official line about Downton was that things were viable at the moment, but the financial future was cloudy even if they sold land for a housing development. It was a concern that sent ripples, no, make that waves of unease everywhere.

The Dowager Countess Violet told her squirrely lady's maid Denker - in confidence, she thought -- that there might be staff downsizing, a message Denker relayed to her fellow servants with the smug addendum that she, Denker, had nothing to worry about "because her Ladyship will always have to dress and undress." 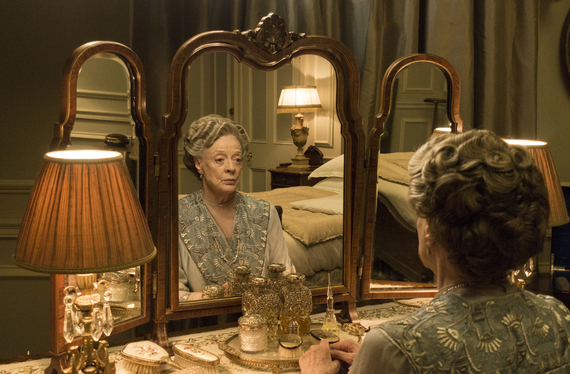 Denker particularly enjoyed taunting Spratt the butler, noting he was more expendable than she. Alas for Denker, her victory dance was cut short when Violet found out that Denker had spilled their secret and suggested that Denker herself might not want to feel too secure.

"Sometimes," Violet explained to Isobel after a shaken Denker had left the room, "it's good to rule by fear."

While personnel uncertainty left Evil Thomas and the new guy Andy rattled, Carson was offended on a more philosophical level. He told Lord Grantham that the place "needs to be run properly," recalling that when he arrived there were six footmen and five housemaids. Now there were only two of each.

"If I could hold back time, maybe I would," replied Lord Grantham, a sentence most interesting for the use of the word "maybe."

All in all, it might seem like the worst job at Downton these days would be the agent, who oversees the general running of the joint.

Branson had taken that role, quite effectively, but now Branson and Sybbie have decamped to Boston, where he no longer feels torn between his affection for the masses and his loyalty to the Crawleys, who are not the masses.

"Poor Tom," said Violet."If he felt like a fish out of water here, I wonder what he feels like there."

"A fish back in the water, I should imagine," replied Isobel.

Whatever Tom's feelings, Mary told Lord Grantham she will become the new agent.

While she had been involved with Branson and Lord Grantham on estate decisions for a while, Lord Grantham still seemed startled, expressing fear the job might be too demanding.

His concern was alleviated through a plot twist as weird as anything that's happened at Downton since the Mr. Pamuk incident.

At the start of Sunday's episode, a mysterious and not especially endearing young woman named Rita Bevan appeared at the front door of Downton - an unusual occurrence, since Downton isn't a place that gets a lot of random foot traffic. 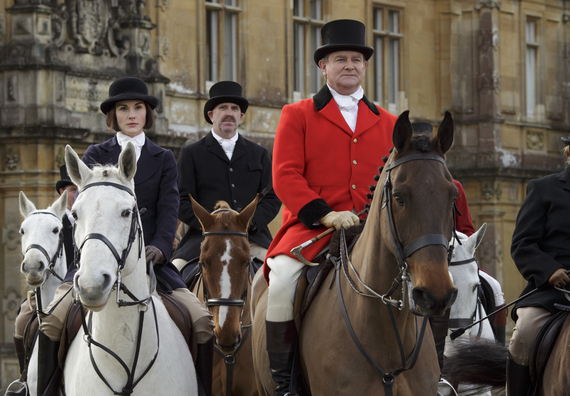 When Mary returned from riding in a hunt, Rita identified herself as the chambermaid at the Liverpool hotel where Mary and Lord Gillingham had slipped away for their ill-fated compatibility experiment.

Rita wanted a thousand pounds not to sell the story to the tabloids.

Mary sent her away. She soon returned, oiling her way into Mary's bedroom by lying that she had an urgent message from Violet. Exactly why Mrs. Hughes believed her and escorted her to Mary's room may have reflected the fact Mrs. Hughes was distracted by the aforementioned marital relations issues, but whatever the reason, Rita sashayed in like she owned the place, taking a bite from one of Mary's breakfast biscuits and reiterating that if Mary didn't fork over a thousand pounds, Mary would be scandalized and ruined.

Mary sent her away again. She returned again, when Mary was out, and this time bolted down the hallway for a chat with Lord Grantham.

Mary returned just about the time Rita and Robert were finishing their conversation. To the surprise of Mary and viewers alike, Lord Grantham was writing a check.

Mary told him not to. He handed it to Rita and said, "Remember, not one word."

"Aren't you the lucky one," Rita muttered to Mary as she left. "I suppose you always are."

Turned out Lord Grantham had paid Rita 50 pounds, after requiring her to sign a confession that she was blackmailing him. If she said anything, the confession would be dispatched to the constabulary.

"My darling Papa," Mary said with considerable wonderment, "transformed into Machiavelli at a touch."

If that was a shocking move by Lord Grantham, he wasn't finished.

Apparently Rita had told him the lurid details of the tryst and apparently it bothered him no more than having to pour his own wine.

He did tell Mary he was most disappointed in Lord Gillingham. Mary said not to be, that Tony hadn't seduced or pressured her. She agreed to the "week of sin," she said, because she just wanted "to be sure."

Lord Grantham didn't exactly say "You go, girl" and give her a fist bump, but he came close. Her actions here, he said, gave him confidence that she had the necessary toughness to be the agent and run the estate.

"You could run the Kingdom if called upon to do so," he said, which was a bonding moment for father and daughter even if it raised some questions about what qualifications Lord Grantham envisions in a monarch. 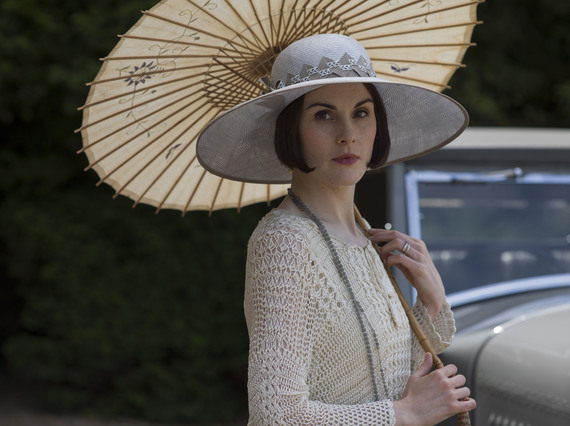 Things turned out equally well for the Bateses, though naturally not without a dark passage.

Sgt. Willis showed up to say a woman had confessed to killing Mr. Green, which would have meant Anna didn't do it. One problem: There was no corroboration, leaving everyone still frazzled.

Happily, he returned later to say there was corroboration. Anna, free at last!

This "takes a rock off our chest," Anna told Mr. Bates, and everyone seemed to agree. The whole Crawley family piled downstairs, broke out a stash of wine and launched a party.

Lord Grantham and Cora did not jump on the table and do the Charleston, but Sgt. Willis did stick around and dance with Mrs. Patmore. It's unlikely that will go anywhere, but we can dream.

Elsewhere downstairs, Mr. Molesley and Baxter seemed to enjoy an interlude of relative calm, and there was an odd role reversal between Evil Thomas and Daisy.

Daisy, an obedient worker even though Miss Bunting apparently awakened her to the plight of the proletariat, went with Mr. Mason to the auction at Mallerton. Mr. Mason was worried because he was a tenant farmer there and had no guarantee the new owner, Mr. Henderson, would keep him on.

Daisy spotted Mr. Henderson and, in front of the Crawleys and Sir John, laid him out in lavender.

She did this despite urgent admonitions from everyone, including Mr. Mason, that she was doing more harm than good. The new owner said as much when she was finally persuaded to shut up.

Back at Downton, calm and remorseful, Daisy rightly feared this might be a sacking offense. Happily for her, the Bates news put Lord Grantham in a good enough mood that he told Carson to give her another chance.

Meanwhile, serial troublemaker Evil Thomas has become a go-to guy for the Crawley grandchildren, George and Marigold. He gave them long piggyback rides, which was rather endearing, which is not a word we've had much occasion to break out in the same sentence with "Thomas."

Speaking of children, that became the new shadow for the Bateses. A tearful Anna admitted to Bates that she has had three miscarriages, and now is afraid she simply can't have children, which she knows he has always desperately wanted.

"There are no words less true than those," he replied.

By episode's end they had reconfirmed their love, but Anna remained convinced that if she couldn't have children, there would always be something missing.

And speaking of troubles, naturally no episode would be complete without some mud splashing on Edith.

First she had to wrestle with an editor who didn't like working for a woman. Then she admitted to Aunt Rosamund she still didn't know what to do with her life.

"Sometimes I feel I've been given one little bit of happiness," she said. "From now on, my life will be all of a pattern." 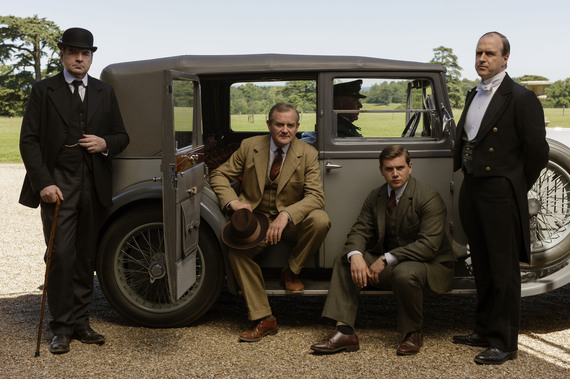 As for Mrs. Patmore, Mrs. Hughes, Mr. Carson and that sex conversation, it began when Mrs. Hughes expressed concern to Mrs. Patmore that she hadn't "thought through" everything that being married to Mr. Carson might entail.

Mrs. Patmore started to say that shouldn't be a problem until a 10,000-megawatt spotlight went off in her head and she realized what Mrs. Hughes really meant.

Without anyone getting near the actual words, Mrs. Patmore agreed to ask Mr. Carson, on behalf of Mrs. Hughes, what he expected from the marriage.

It took Mrs. Patmore two tries to actually have the conversation, and on the second one we got to see the same 10,000-megawatt spotlight go off in Mr. Carson's head.

He was a bit flustered, which for Mr. Carson is a lot, but he recovered and gave Mrs. Patmore a lovely message to relay to Mrs. Hughes. He said he was "happy and tickled and bursting with pride" that she had accepted his proposal.

He did, however, say that he wanted "a full marriage," not just "warm companionship," and that if Mrs. Hughes were uncomfortable with that, it would break the deal.

Not surprisingly, Mrs. Hughes was reassured and told Mr. Carson that would be fine.

We knew they'd get there. We just didn't know we'd have such a fun little pit stop along the way.