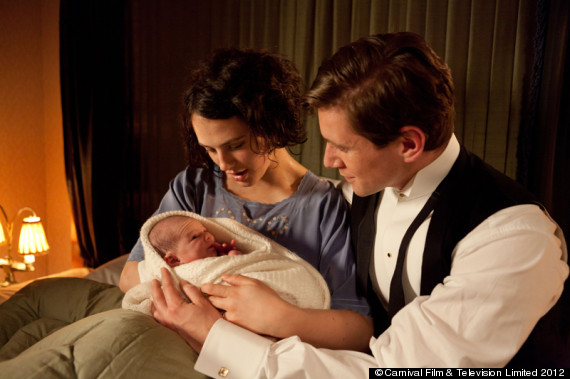 Note: Do not read on if you have not yet seen Season 3, Episode 4 of PBS' "Downton Abbey."

That's arguably a good thing, since the endless drama over dinner attire and electric toasters was getting a bit old. And even matters as grave as Edith's matrimonial fortunes and the future of Downton itself had begun to assume a weightless quality. There was no problem, it seemed, that series creator Julian Fellowes couldn't resolve or pretend had never happened in a span of two episodes.

Well, the death of Lady Sybil can't be resolved, and it won't be forgotten. As the Dowager Countess -- her customary hauteur invisible for once -- tells Carson, "We've seen some troubles, you and I. Nothing worse than this."

How true that is! And now that we know that Fellowes is fully capable of going "Game of Thrones" on us, I have to wonder what else could happen. Could Lord Grantham really lose Downton? Could those two knuckleheads really thwart Anna's efforts to save Bates? Could Mrs. Crawley lose her position in society for harboring a lady of the night? Is it possible that Cousin Matthew --

Oh, let's not speculate, shall we? There's enough in this episode to chew on, starting with Cora's entirely understandable anger with Robert. You can't help but think that all this nonsense about Dr. Clarkson not being fit to care for Sybil during childbirth stems from the Earl's thinly concealed hatred of Tom, the lowly Catholic steering-wheel-holder who stole his daughter away and then endangered her safety by getting wrapped up in some revolutionary mischief. Fed up with the presumptuous behavior of his social inferiors -- and evidently incapable of enduring, let alone comprehending, even the most rudimentary anatomical explanations -- Robert calls in a ringer who meets the one qualification he understands. Yes, Sir Philip Tapsell knows how to dress for dinner; although he does offend the poor Earl's ears with his vulgar boasting: "Never fear, Duchess," he recalls telling one victim patient, "I'll get a baby out of you one way or another."

Like any good Englishman, His Lordship has fortified this emotional decision with justifications of unimpeachable logic. Clarkson misdiagnosed Matthew's paralysis and let Lavinia die; therefore, he is not good enough for Sybil. Like any good American, Cora responds by negotiating: Sir Philip can preside over the birth, but Dr. Clarkson will be present as a consulting physician of sorts.

It sounds like a solution, but it quickly becomes a nightmare. Both doctors are offended, and when Sybil shows signs of trouble, they stake out opposing positions. Noting her swollen ankles and "muddled" mental state, Dr. Clarkson concludes that Sybil may be toxemic and warns that she could suffer eclampsia if she isn't taken to the hospital at once for a Caesarian section. Sir Philip, unaccustomed to being second-guessed by a country doctor, reassures the family that Sybil is perfectly fine. What to do? Lord Grantham sides with Sir Philip, but even the Dowager Countess acknowledges that it's not his call to make: "The decision lies with the chauffeur," she declares.

But Tom never gets the chance to decide, because just as he's struggling to process all the information, the baby is born. Even Dr. Clarkson appears satisfied that Sybil is fine. But the reprieve is only temporary. A short while later, she begins convulsing, and we are treated to the altogether shattering sight of Tom and Cora desperately trying to ease her suffering while both doctors stand by, miserable in their shared knowledge that nothing can save her now.

So whose fault is it, really? The Dowager -- whom I've begun to view as the conscience of the show, however sick that may seem -- reassures Robert that he's not to blame, but even he acknowledges that there is something to Cora's criticism of him. Certainly, it seems likely that Sybil would have lived if Robert hadn't invited Sir Philip into the picture. And even though the decision of whether to take Sybil to the hospital ultimately fell to Tom, that only happened after the two doctors had wasted an hour arguing.

Whatever the truth, what matters is that Cora blames Robert for their daughter's death, and that kind of resentment can kill a marriage. I suppose we'll find out whether "Downton Abbey" has the attention span to see these repercussions through or chooses instead to sweep them under the carpet.

Either way, it's time we bid farewell to poor Lady Sybil, played so sensitively by Jessica Brown-Findlay. Sybil was the kindest of the Crawley daughters -- even in her agonizing final hours, she never stopped laying the groundwork for her beloved Tom's happiness -- and for once, I thought the emotional outpouring from those downstairs was earned and believable. "The sweetest spirit under this roof is gone," says Mrs. Hughes, and you know she doesn't buy into all that "great family" baloney the way Carson does. Even Thomas can't hide his sorrow, though he tries at first. "In my life, I can tell you not many have been kind to me," he tells Anna. "She was one of the few."

Tell you the truth, I'm a bit worried about Thomas. He was presented very sympathetically in this episode, which makes me think something very, very bad is about to happen to him. Obviously, O'Brien is setting a trap for him by telling Jimmy it's in his best interest to submit to those creepy caresses that Thomas keeps doling out as he explains how to wind a grandfather clock. (How do you know it's noon at Downton Abbey? The big hand touches the little hand -- rimshot!) And Jimmy has made it clear that he's not enjoying the extra attention, which makes me wonder: Does this end with Jimmy beating the bejeezus out of Thomas, or with some kind of scandalous exposure? Either way, it won't be great for Jimmy's fortunes either, which probably suits O'Brien just fine, given her ambitions for young Alfred.

Speaking of him, by the way, have you noticed the love quadrangle blossoming among Alfred, Jimmy, Daisy and Ivy? I guess if you throw Thomas in there, it's a love pentangle. Love pentagram? I don't know the terminology, but in any case, it's getting complicated. I like how Mrs. Patmore waited for the right moment to advise Daisy to ease up on her fascistic mistreatment of Ivy, and I hope the lesson sticks.

I guess we have to talk about Mrs. Crawley and Ethel now. First of all, I'm impressed that dear Isobel managed to make it through an entire 47-minute episode without once uttering the word "prostitute," but her plan to replace Mrs. Bird with Ethel seems dicey at best. For one thing, Mr. Moseley and Carson already have their panties in a bunch, and just wait until Lord Grantham catches wind of it (though, at this point, he may not give a rat's ass). More importantly, as Mrs. Hughes instantly perceived, Ethel doesn't even know how to make a cup of tea. Still, I give Mrs. Crawley credit for stubbornly leveraging her unexpected good fortune to achieve positive social change, and I greatly enjoyed the scene where she allowed Mrs. Bird to excuse herself. Was I the only one laughing when the mean old witch expressed her fear that someone might mistake her for a prostitute and Isobel replied, "Nobody could look at you and think that, Mrs. Bird."

Subplots, subplots, subplots! Edith has been invited to write a column for The Sketch, which is notable mainly because (a) I told you so (sort of) and (b) it prompts this amusing one-liner from the D.C.: "And when may she expect an offer to appear on the London stage?"

Meanwhile, Matthew can't stop burdening the visiting professionals with his personal problems: He wants Sir Philip to explain why he and Mary haven't conceived ("Anxiety is an enemy to pregnancy," the pompous old quack assures him), and he wants Mr. Murray the lawyer to help him make sense of Downton's books. Bad timing on the latter, as Mary walks in on their conversation and practically sets fire to the room with her eyes, Drew Barrymore-style. Ah, young love.

The official purpose of Mr. Murray's visit was to debrief Anna about the evidence she has procured on behalf of her convicted murderer husband, Bates. It has something to do with a pie and a train and that horrible woman who was hanging up the laundry -- I honestly can't follow it. Basically, they need to get that woman to make a statement without letting her know that it would help free Bates, since she hates him, and their mission will be complicated by Bates' former cell mate and his prison guard buddy, both of whom are still angry about the previous incomprehensible subplot in this series.

But I don't want to end on that note. This episode moved me. It made me really sad. Last week, I asked what would happen next to shake Robert out of his complacency, and I guess I got my answer: Tom Branson, cradling his newborn daughter, looking down from the window of the room where his wife died for no good reason.