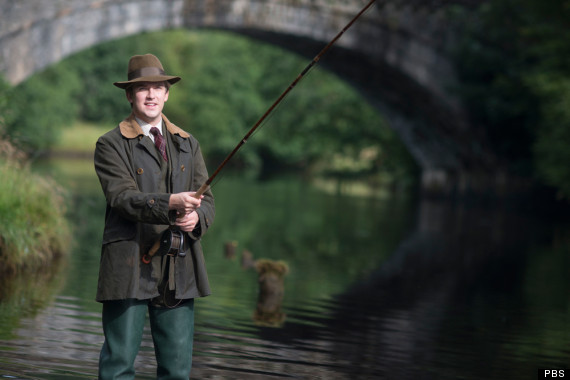 Note: Do not read on if you have not yet seen Season 3, Episode 7 of PBS' "Downton Abbey" (known in the UK as the "Christmas Special").

I suppose it has become fashionable to kill off major characters on today's quality TV shows.

Under the old rules, characters in popular shows tended to enjoy immortality and agelessness, on the theory that viewers really wanted one thing above all: to spend time at home with people who were funnier, better-looking and/or more interesting than the ones we know in real life.

In those days, when a character faced mortal peril, you could be pretty sure they would survive. I'm reminded of those ridiculous scenarios from the old "Batman" series -- however will our hero escape this time? Well, he always did. And even when someone actually perished, you could be fairly certain she or he would find a way to come back -- even if only in a flashback sequence.

But we are living in a post-"Sopranos," post-Sean-Bean-on-"Game of Thrones" world. Hell, we're living in a post-Lady-Sybil "Downton," and -- judging from the passive-aggressive press release that the show's producers issued after tonight's episode aired in the UK -- Matthew Crawley is gone for good. That car crash was fully, finally fatal.

My colleague Maureen Ryan thinks this is a healthy development for "Downton," and I encourage you to read her take. I'm not so sure I agree, however. Not because I think the series can't work without Matthew Crawley -- his shmoopy talk with Lady Mary makes it hard to remember the days when their Sam-and-Diane love-hate dance was one of the biggest reasons to tune in. And not because I want to turn back the clock to the days where nothing on TV ever changed. I'm upset because I don't like it when a story like this one, which owes at least as much to "Great Expectations" as it does to "General Hospital," lets contract disputes determine its plot.

In the aforementioned press release, ITV made it rather too clear that Matthew had fallen victim to the career ambitions of the man who played him, Dan Stevens, who recently finished his run on Broadway opposite Jessica Chastain in "The Heiress." And Stevens himself acknowledged that he got tired of "Dowton" "monopolising" his career. I gather that British TV doesn't pay very well, at least by comparison to its American counterpart, and I can understand a rising actor's concerns about being typecast. I can especially understand Stevens not wanting to say things like, ""I'm doing a jig! I feel as if I've swallowed a box of fireworks!"

But that doesn't mean I have to like the results.

Never mind that Matthew's car accident came out of nowhere. We had no indication that Matthew is an unsafe driver, or that the roads near Downton are perilous, or that trucks have been known to careen down the one-lane highway in a fashion highly dangerous to giddy new dads driving sports cars. Never mind that even the thematic foreshadowing began about 45 seconds before the end of the episode and, for that matter, the season. Let's leave all that aside, because the truth is that Matthew's death just feels wrong. It's too much, too soon. Yes, I know that tragedies don't always come in neatly spaced out intervals. I heard a story recently about someone who lost three close family members in a single year. But we don't watch "Downton Abbey" because this family is unusually susceptible to tragedy. In fact, I suspect many of us watch it because it extracts such high doses of drama and tension from such trivial concerns.

There were a number of those storylines in this episode, and I enjoyed them very much. Somehow, Edna's overtures to Branson -- laughably innocent by today's standards, but reckless and bordering on obscene in Downtonland -- filled me with such horror-movie dread that I was frankly relieved when Mrs. Hughes sent her off with some words of wisdom about how there are rules to be followed in this way of life. And I'll admit I felt moved when Mrs. Hughes told Branson that he needn't be ashamed about his new life, and should be his own master until he finds someone else to share it with.

I had the same feeling of terror when Jimmy and Alfred dared to plop themselves down on the furniture like living, breathing human beings. Thank God it was Mrs. Hughes who walked in and not Mr. Carson, who would have had the two of them shoveling manure for the next hundred days for a violation of that magnitude. As I think about it, this really was Mrs. Hughes' episode, wasn't it? Her rescue of Mrs. Patmore from that hideous pig who only wanted to get inside her paté; that hilarious encounter with Carson, where he instructs her not to envy the heavy burden of leadership; even the subtle charge of flirtation that passed between the two of them at one point -- is it possible these two will someday get together?

But my larger point is that "Downton Abbey" works best when it sets its characters' unruly passions against the impossibly restrictive social order of the day. You feel like cheering when Shrimpy asks the Dowager Countess to escort Rose into the ballroom -- her mother's hysterical slut-shaming notwithstanding. You get warm inside when Jimmy sets aside his panicked homophobia and accepts Thomas' heartfelt offer of friendship. You feel oddly gratified on behalf of O'Brien when she dodges that cup of spiked punch and reveals her scorpion nature to Wilkinson. And you honestly don't know what to think when poor unlucky Lady Edith decides to take a chance on yet another unsuitable suitor.

Those are the stories that only "Downton" can tell as well as it does. Coping with the aftermath of one death is challenging enough for this program, and I'm worried that the effort to juggle two at once will go awry, either by weighing down the action or by underplaying the impact of a chain of events that would devastate even the heartiest of families. Or both!

But I guess it's too early to worry about what next season will bring. For now, I'll just say that I was glad to see Robert come to his senses about the need to modernize Downton; I was moved by the Dowager Countess' kindness to Cora when the latter lost her composure remembering Lady Sybil; and I'm glad Rose is moving to Downton. Hey, it just hit me: Do we think she and Branson will wind up getting together?

• Is Mary going to become more horrid than ever next season? I had the thought as we were reminded time and again of Matthew's unique ability to defuse her nastiness, especially toward Edith. And of course there was all that talk at the end about how she wants to be Matthew's version of herself for all time. (Side note: That bit where he says he's seen her naked and held her body and knows the real her -- why did it make my skin crawl?) If I had to guess, I'd say she becomes horrid for a while, then realizes she owes it to his memory to be her better self. Fast-forward 45 years and does anyone disagree with me that she'll be exactly like her grandmother?

• You know who didn't annoy me this week? Anna and Bates! I loved it when Bates offered Rose that peppermint, and I thought it was extremely sweet when Anna paid tribute to Bates' grandmother's Scottish blood by learning to reel. I wasn't even that turned off by the strings that swelled as Bates acknowledged to Lady Mary that she is, indeed, marvelous.

• Speaking of the DC, she didn't have a banner episode for one-liners. Something about the Scottish air seemed to mellow her. But I did enjoy her response after Susan blurted out the word "slut": "Heavens, that's not a word you hear often in the heather." In the end, though, I think Thomas got off the meanest and therefore best line, regarding Mrs. Patmore. "She's a woman, isn't she?" said Daisy. His reply: "Only technically."

• These toffs sure have a funny way of hunting. Their servants do everything. Show me where to go, aim the gun and then tell me when to pull the trigger. Does the servant chew the meat for them, too?

• I want to play a video game set in that castle in Scotland.

• So Alfred wants to be a chef. Does that mean we should be worried about Mrs. Patmore's health? Or is this shared interest somehow going to bring him and Daisy together after all?

• There is some disagreement on the spelling of the Marquess of Flintshire's nickname. Wikipedia has it as "Shrimpie," while the Downton Wiki goes with "Shrimpy." Either way, great name!

• Anyone wish they'd spent the money to show us the car crash, or was it better to have it happen off-screen?

• Sorry, Edith, but I don't see a happy ending to this business with Michael Gregson, either.