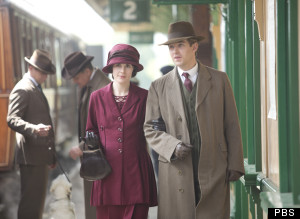 Do not read on unless you've seen the "Downton Abbey" Season 3 finale.

"Downton Abbey" fans, I know you're still reeling from what happened in the final minute of the show's season (well, you're reeling if you managed to avoid the spoilers that were everywhere after the season finale aired in England a couple months ago).

I know it may be hard to hear this, but all things considered, I think Matthew Crawley's death was for the best.

Before you charge off to the comment area to tell me I'm history's greatest monster, please take note of what I am not saying.

I'm not saying it'll be easy for the show to lose Dan Stevens. It's an enormous loss; Stevens is one of the best actors in the cast.

But let's be honest: The actor, who talked about his decision to leave the show late last year, was saddled with some of the show's dumbest story lines. In Season 2, Matthew went from wheelchair-bound invalid to healthy chap in less time than it takes for Carson to serve tea, and in Season 3, he kept turning down a fortune (a magical fortune that fell from the sky at just the right moment, of course), thanks to hidebound morality that even Queen Victoria would have thought was a little too uptight. That's to say nothing of the endless, repetitive obstacles that were placed in the path of Lady Mary and Matthew, who we all knew were going to get hitched as soon as we saw them start to spar in Season 1. We all had to sit through storylines that pretended that they weren't meant for each other, some of which were reasonable diversions, some of which were not (Don't we all miss Lavinia and that guy Lady Mary almost married? The guy who's name I can't even recall? I didn't think so.)

It's a miracle that Stevens and Michelle Dockery (Lady Mary) were able to make much of that malarkey work, or almost work; in the hands of lesser actors, those storylines could have been truly painful. But, as I said in my "Downton Abbey" Season 3 review, they, like most of the rest of the cast, are able to elevate creator Julian Fellowes' dodgier ideas and make his good writing really sing.

To get to the good moments, though, we usually had to put up with half a season or more of preposterous plot devices and silly repetition. And the latter is one of the big problems with Fellowes' writing: He really only knows how to do one or two things with each character. As a storyteller, he just doesn't have that many moves, so the characters stay in tight, shallow orbits.

Though Maggie Smith can do anything -- as she's proven in the few scenes in which her character has gotten to show grief, pain or other human emotions -- the Dowager Countess gets to quip and condescend, and that's it. Fellowes is not a showrunner who stretches his actors: He usually keeps them in little boxes, and they're not allowed outside them very often.

So O'Brien is mostly mean and vindictive; Carson usually harrumphs and is disappointed in lax standards and lax people; Lady Edith is usually frustrated and misunderstood; Matthew's mother is usually interfering in a well-meaning but slightly annoying way; and Lord Grantham is usually oblivious and blockheaded, but he obviously meant to be seen as well-intentioned and good. Just to drive home the point about characters staying within cramped orbits: Mr. Bates walking round and round in a circle was an actual storyline this season (a storyline that couldn't end soon enough, obviously).

The point is, characters rarely get to stray outside the parameters Fellowes has set up for them, and I think that's one reason the show is so popular -- people know what to expect, and that's not necessarily a bad thing. "Downton" offers a lush setting, occasionally sharp drawing-room comedy and some storylines that aren't silly and/or superficial. All those things keep people coming back for more -- plus that sense of familiarity and the knowledge that this world will hew to certain rules.

But the rules, repetition and tight parameters can be frustrating too, especially when you see what the actors can do when they are let out of their gilded cages. In my opinion, the best aspect of Season 3 was Lady Sybil's death and the fallout from it; when that happened, the show found a deeper key and the whole world resonated in much more powerful ways. The scenes at Sybil's deathbed were astonishingly well-acted and heartbreaking: Once Branson was allowed to be more than a didactic revolutionary, Allen Leech did a phenomenal job of conveying the character's initial devastation and depicting his lingering grief.

Cora has often been saddled with scenes of dithering cluelessness -- the character arbitrarily changes week to week, based on what the needs of the story are -- but Elizabeth McGovern did impressive work when allowed to access more of the primal and vital emotions unleashed by Cora's loss and the anger she felt toward her husband. Delving into the unpredictable muck and mire of real human emotions gives the show a depth and weight that it needs to keep it from being something more than a country house photo spread come to life.

But Fellowes is afraid of letting his characters run free for too long; real change rarely comes to Downton and the show tends to put things back the way they were whenever possible. Ultimately, Robert was vindicated (in a weird, underhanded way that the show apparently didn't think was odd). In any event, Robert and Cora were reconciled, and he apparently hasn't learned much, nor does the show think he needs to.

Everything gets tidied up and put back in its place: The Irishman with revolutionary urges is once again made a Downton employee; the estate is safe due to the birth of an heir; Thomas remains a frustrated footman who'll have to keep his desires on a leash; Mrs. Patmore doesn't get married and Shrimpy and his wife stay unhappy together. Characters accept -- or are forced to accept -- their fates, even in situations where doing so doesn't make a ton of sense, but that's because "Downton" is all about maintaining a certain order in a certain way. Fellowes likes disorder and change about as much as Mrs. Hughes likes cheeky housemaids.

But too much tidiness can be oppressive, and I can see actors getting tired of the restrictions the show places on their characters. And I can't think of what the show was supposed to do with Matthew going forward. He doesn't really have a job -- Branson was going to take care of the estate, and upperclass men and women weren't supposed to work, anyway.

So what would a fourth season have held for Matthew? More trumped-up arguments with Mary? More gentlemen's disagreements on how to run the estate? There just wasn't a lot left for Stevens to do with the character, and why shouldn't an actor on a hot show strike while the iron's hot and try to branch out into other kinds of projects when he gets the chance?

All that "Downton" held for Matthew was more of the same, and those repetitive storylines had reached the point of diminishing returns. I think more highly of the actor and the character than to want that. And his death will force the show to evolve: Fellowes may not like to embrace change, but with Stevens' departure, "Downton's" creator will be forced away from the Matthew-Mary dynamic and will have to try a few new things. Ultimately, that's a good thing for the audience, because it's no fun to always know what to expect.

Let's face it, you're already dying to see what happens with Lady Mary and the baby in Season 4, aren't you? That just proves this is one sad, soapy cliffhanger that has done its job.