Last week I had the opportunity to exhibit my art installation "The Drug War" at the International Drug Policy Reform Conference at the Crystal Gateway Marriott Hotel in Arlington, Virginia. Over 1,500 people from around the country attended the event which featured panels and roundtable discussions on a wide range of topics from mass incarceration to marijuana legalization.

My intent of the installation was to create a space countering the DEA Museum that was right around the corner which showed America's view of drug prohibition with its anti-drug crusades.

My art would allow the viewer of my art to walk through several stations that showed visual narratives which were powerful reminders of the raging war on drugs that locks up hundreds of thousands of people and destroys many of our communities. It also provided space where people could draw and paint and become part of the art installation.

The art installation highlighted issues that affect all Americans, whether they use drugs or not. For example in "Justice in Black and White" I displayed the racial imbalance of New York's Rockefeller Drug Laws which were the precursor of racist federal mandatory minimum sentencing laws. It showed crying babies dressed in prison garb laying helplessly in front of original signs which displayed photos of their incarcerated mothers.

And inn "Cops or Docs" a cigar box sitting near a marijuana plant contained a cop and a doctor posing a question which asked who should decide what medicine we should put in our bodies?

But for me what was the most powerful station of the installation was the "Upside Down American Flag" which comprised of an electric red, white and blue flag that was displayed upside down. Above it was a sign-in-board displayed over an American flag that was displayed upside down on the floor. You had a conscious choice to sign in by walking around the flag or walk on the flag in order to sign in. I watched in awe as individuals signed in, some side stepping the flag, and others walking heavily on the flag.

It was amazing to conduct this social experiment on nationalism until an irate former soldier approached me and strongly asked me to remove the flag from the floor. I told him I had a constitutional right to display the American flag upside down on the ground. He stood his ground and stuck to his guns, his opinion created by the way most soldiers have, by giving their lives to our country for noble reasons. I respect that, however as a proud American I knew I had a first amendment constitutional right to display my art. For the sake of not elevating the confrontation I removed the flag from the floor and folded it neatly on a chair.

As I thought about the incident I flash backed to the time I was imprisoned for 15-years-to-life for a non-violent drug crime in New York State. I rotted away for many years because of the United States reliance on its zero tolerance drug policy because of the war on drugs. As I stared at the flag I thought about the important role artists have played in history as social commentators.

Like Picasso with his 'Guernica' and Goya's with his Third of May,' both of these works of art powerfully portrayed the atrocities of war, my art installation the Drug War, follows their lead in revealing the impact of Americas drug war imprisoning millions of Americans for putting substances in their own bodies. One day it must end, but until then, I will keep displaying my upside down American flag, reminding Americans of their constitutional right to do so! 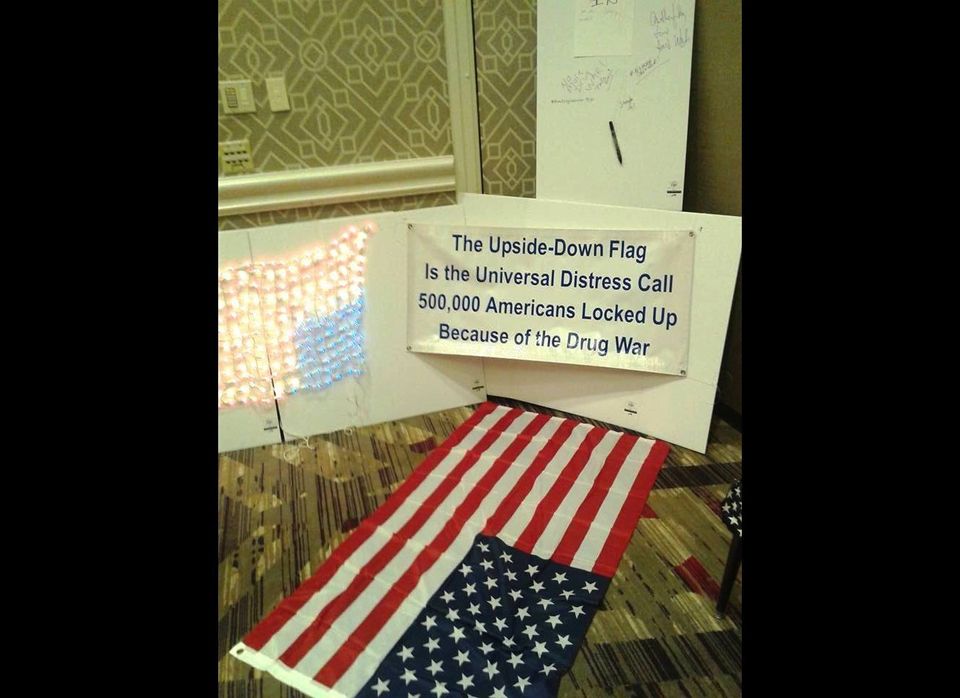