WASHINGTON -- David Bronner had been camped out in a steel cage in front of Lafayette Park for almost three hours before a truck full of firemen came to remove him forcibly with a power saw.

The long-haired president of Dr. Bronner's Magic Soaps, a top-selling natural soap chain based in Escondido, Calif., was holding court in an 64-square-foot cage to draw attention to the federal prohibition on growing industrial hemp, a policy which fails to distinguish between oilseed and fiber varieties of cannabis.

For Bronner, that means spending over $100,000 a year importing from Canadian farmers the hemp oil he'd rather be buying domestically. "Obama has promised a rational approach to policies," he said into a microphone hooked up to his cage. "So far as president he has blown off the U.S. hemp industry."

More than a dozen members of the U.S. Park Police stood outside Bronner's cage Monday morning, trying to cut the metal with giant red clippers. They then called a tow truck that was unable to move the cage, and at one point threatened to arrest HuffPost for stepping into the street to take a photo.

Inside the cage with Bronner were a dozen industrial hemp plants, which, Bronner said, all contained less than 0.3 percent THC, in accordance with Canadian regulations and had no potential use as a drug. He used an oil press in the cage to make fresh hempseed oil, passing out oil-smeared bread through the bars as he informed passersby of the high amounts of nutritious omega-3 fatty acids it contained. (HuffPost was not there in time to sample the bread.)

"The industrial hemp plants I am harvesting and processing into oil cannot produce a high of any kind, but according to the Obama administration, I'm in possession of approximately 10 pounds of marijuana,” said Bronner. "President Obama's U.S. attorney who handles drug cases in Washington, D.C., will not be able to prove my hemp has any more drug value than a poppyseed bagel.”

The action comes after Sen. Ron Wyden (D-Oregon) on Thursday introduced an amendment to the farm bill that would allow farmers to grow industrial hemp.

The legislation would exclude industrial hemp from the definition of "marihuana," thereby allowing hemp farming to be regulated by state permitting programs, bypassing the federal government's long-standing prohibition of marijuana.

A sister bill, H.R. 1831, was introduced in the House earlier this session by Rep. Ron Paul (R-Texas).

CORRECTION: This post has been updated to reflect the correct dimensions of Bronner's cage. 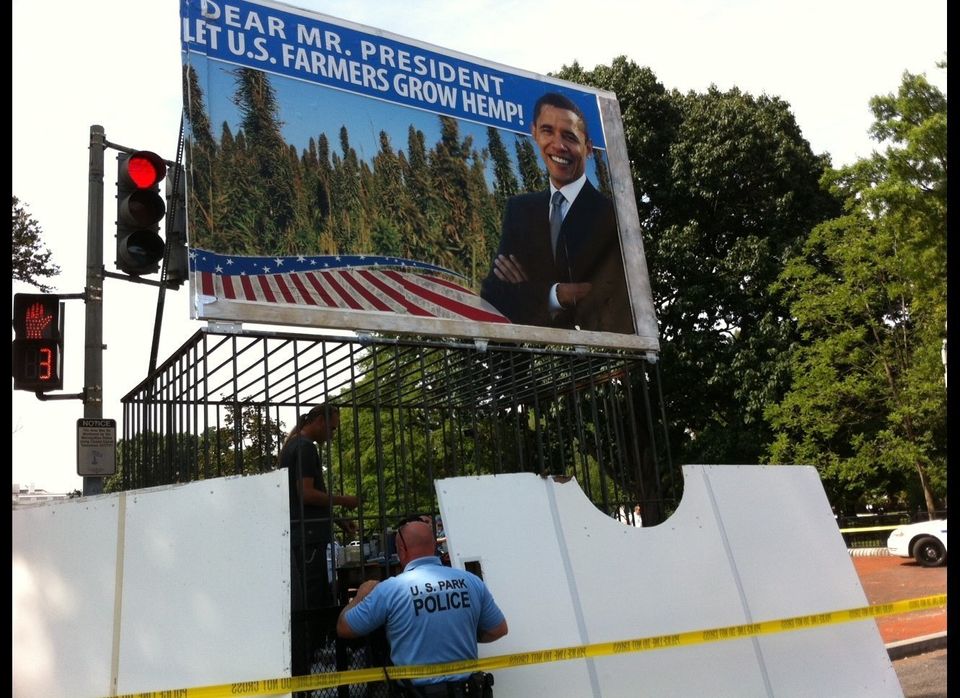