There's a reason California is associated with surf, sun and sand. The Golden State has an abundance of these riches, and those who live there take their beaches very seriously. This makes more sense to outsiders when you realize that California is by far the most populous state (38.8 million per the 2014 Census) and over 68 percent of its residents live near the coast.

Californians have salt water in their veins and sand perpetually stuck in the spaces between their car seats, so it's no surprise that the Surfrider Foundation began with a handful of surfers from Malibu. The year was 1984 and the surf break at Malibu Point was under threat from development and pollution. The surfers organized, protested and were ultimately successful in preserving the area. But, like most surfers, they refused to give up on the wave until they'd ridden it as far as they could go. Thirty-two years later, they're still riding.

Surfrider volunteers at the beach. (Photo courtesy of Surfrider Foundation)

Today, the Surfrider Foundation encompasses 85 chapters across the United States and is made up of over 50,000 volunteers. The mission of the organization has grown beyond protecting local surf spots and, as Surfrider is eager to point out, one does not have to be a surfer to join. Its members are made up of everyday people who want to see smart coastal development, clean water and plastic-free beaches. Together, they've won victories in 344 campaigns across the areas of beach access, coastal preservation, ocean protection and plastic pollution.

And while most of its chapters are based along the United States' three major coastlines, chapters have also sprung up in the middle of Texas, Minnesota and near the border of Arkansas and Tennessee.

"Those are locations where we have seen a critical mass of people who are concerned about the ocean," Dr. Chad Nelsen, CEO of Surfrider Foundation, told Planet Experts. "In Texas, they're focused in Austin, which is the capital -- so it's important for our statewide political advocacy in the state. But there's also a ton of surfers who live in Austin and they basically make three- or four-hour drives to the coast. They'll leave their house at four in the morning to get to the beach at eight to surf."

The same is true for surfers in Georgia and Memphis, added Nelsen, who often travel to the Florida panhandle. "The way it works at Surfrider is our chapters are organically born," he said. "If they can meet the qualifications for a charter, if they can rally enough people and organize around some issues, we'll support them."

Dr. Chad Nelsen became the Chief Executive Officer of the Surfrider Foundation in October 2014 after serving as its Environmental Director for 16 years. As a Laguna Beach native, the son of a marine science educator and the co-founder of "Surfonomics," Nelsen's West Coast bonafides are on lock. The man has dedicated himself to achieving Surfrider's mission of protecting 100 percent of the nation's coastlines, making it the first of three major goals he set for himself when he took on the leadership of the organization. 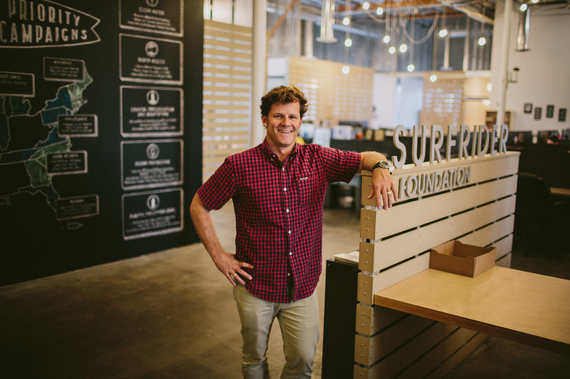 The second goal was to provide more support to Surfrider's tens of thousands of volunteers at the grassroots level. "[They] are out there developing leadership skills, and it's pretty incredible that you have these 'laypeople' taking on these really challenging and complex environmental issues," he said. "So we provide the legal, scientific, policy and organizing support for these chapters out there."

The impacts of climate change are likely to last even longer, according to the majority of climate scientists. For the first time in human history, the carbon saturation in the atmosphere is at 400 parts per million in the Northern Hemisphere. At the current rate of industrial and agricultural emissions, the carbon and other greenhouse gases in the planet's atmosphere are predicted to influence climate and weather patterns in chaotic ways, such as a major increase in wildfires, hurricane intensity, food shortages, heat waves and coastal flooding events. The absorption of carbon by the ocean is also harming corals and shellfish due to increasing acidification.

Not only is the ocean becoming more acidic, he added, it's also getting warmer. Dangerously so. "It's going to increase sea level rise, both because of the melting of the glaciers and also the thermal expansion of the ocean as it warms. Sea levels rose about eight inches in the last 100 years. It's going to rise another six feet in the next hundred, so preparing our coastlines for that change, I think it's going to fundamentally rearrange our relationship with the coast."

The proof, said Dr. Nelsen, is arriving every day. He pointed to the record flooding that recently occurred off the New Jersey and Delaware coasts during winter storm Jonas. Extreme storm surges are becoming yearly events, and both NASA and the Union of Concerned Scientists have urged coastal communities across the world to prepare for yearly floods. Following the widespread devastation of Hurricane Sandy, Jersey City is already building a two-mile, $2 billion seawall.

Surfrider is currently pursuing two major campaigns for improving the nation's beaches, one within California and the other at the federal level.

The California campaign focuses on raising awareness for the state's deferred plastic bag ban, which is up for a vote at the end of this year. In September 2014, Governor Jerry Brown signed Senate Bill 270, making California the first to ban plastic bags at the state-level. However, the ban was postponed following a signature campaign undertaken by the plastic industry.

Nelsen says the referendum was a disappointment but not really a surprise. The plastic industry, he explained, "makes about $16 million per year selling those bags in the state of California, and they invested a few million in the referendum. So if the referendum fails, it will still be a profitable exercise for the bag industry -- just by delaying the implementation of the policy for a year." In the meantime, the cleanup for the bags that litter the state's beaches, streams and mountains costs taxpayers millions of dollars every year.

Surfrider is urging all Californians to vote "yes" on the ban. On the whole, said Nelsen, Californians are in favor of ditching their single-use plastic bags for reusable ones -- over 100 communities in the state already have such bans in place. "I think there's a pretty good chance that the referendum will fail," he said. "It's just too bad, because it's another 18 months of senseless waste and pollution."

Throughout the Obama administration, the BEACH Act has consistently been thrown on the budgetary chopping block, with legislators threatening to strip its funding entirely. While fiscal conservatives dislike the subsidy, Nelsen points out that the return on investment is several magnitudes beyond its $9.5 million budget (which is shared amongst all 35 states).

"Compared to the tens of billions of dollars generated by coastal tourism, [it's] a small investment," he said.

Further, BEACH ensures that the nation's beaches are all being held to at least a minimum standard of health. In California, where the beach is integral to its economy, water quality monitoring is extensive and funded by both the state and the fed. But states like North Carolina and Oregon receive 100 percent of their coastal monitoring funding from the BEACH Act. Defunding the Act would not only end water monitoring in these states, it would also eliminate residents' right to know when beaches are unsafe to visit.

According to Amanda Griesbach, an Environmental Compliance Inspector for the Los Angeles watershed, beach water doesn't have to look polluted for it to be contaminated. An excess of fecal bacteria in the water can lead to nausea, vomiting and diarrhea, as well as skin, ear and eye infections. In an interview with Planet Experts, Griesbach explained that California is unique in that it tests water samples against seven marine water bacteria standards, whereas many states "only have one or two standards." Losing funding for the BEACH Act would expose countless Americans to this harmful bacteria.

Taking Responsibility for the Nation's Coasts

The Surfrider Foundation has grown steadily over the past three decades, and today its volunteers dedicate 540 collective hours to the organization per day. It's something Nelsen takes great pride in. "There are people doing work on behalf of Surfrider and our coasts every day of the week, every day of the year," he said. "It's not just taking on these campaigns, it's the day-to-day stewardship, whether they're out cleaning beaches, planting dune grass, testing water. And it is growing."

The Foundation's goal of protecting 100 percent of the nation's coastlines has grown beyond a California dream. To Nelsen, it's absolutely possible. "We think it's a numbers game," he said. "We're convinced that we can rally coastal communities to protect their little stretch of coast, and cumulatively protect the whole coast of the U.S. We love these places. Everyone does. And they're worth protecting. If you give people the platform to do that, they respond."