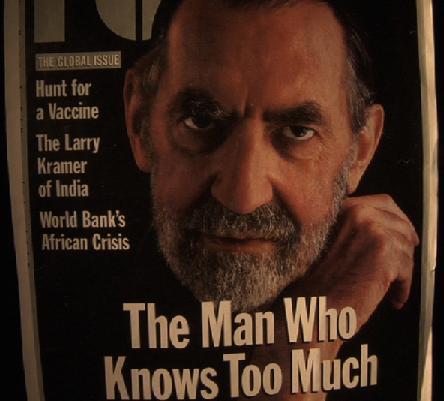 Dr. Joseph Sonnabend on the cover of POZ Magazine

There's an edgy new film making the rounds of the gay film festivals. Age of Consent by Charles Lum and Todd Verow is about gay sex and its legislative battles in Britain. The story is told from the premises of the Hoist, one of London's few remaining leather bars. It has hot guys, hot sex and some commentary, including from British gay activist Peter Tatchell and South African and New York physician Joseph Sonnabend.

Sonnabend is known for his efforts on behalf of the gay community, preceding AIDS and throughout the epidemic -- for GLBT health care outreach and advocacy, for research on STDs and treatments, for his co-authorship with Richard Berkowitz and Michael Callen of an early safer-sex guide, "How To Have Sex in an Epidemic," and for being a co-founder of the American Foundation for AIDS Research (AMFAR). In "Age of Consent," recalling that earliest period of the epidemic, Sonnabend observed that he, Berkowitz and Callen encountered hostility from elements of the gay community, including from Gay Men's Health Crisis (GMHC), and also alleging that I, Larry Mass, accused him of being a "mass murderer."

Larry Kramer leveled that accusation of "mass murderer" and "genocide" at everybody from Ed Koch to Anthony Fauci, but such big guns were rarely for lesser activists like me. Although I never made the accusation Sonnabend alleges in Age of Consent, however, the discord with GMHC that he was alluding to was real and worth looking back at.

Between 1981 and 1984 no one knew for sure what the cause of the epidemic was. Most likely it was a virus, almost certainly so by 1983, but the establishment of HIV as the cause of AIDS didn't happen until early 1985. Meanwhile, doctors had to try to make the best suggestions we could, based on probabilities. On the surface, the safer sex guidelines developed by Sonnabend, Berkowitz and Callen in 1983 were unassailable. They called for condom use, and were upbeat and creative about incorporating s-m and other ways of being alternatively and safely sexual.

The problem is that their recommendations were bound up with a questionable theory of causation. Gay men were said to have had so much sex with so many partners, acquiring and transmitting so many STDs, that their immune systems were breaking down. Aggravating this breakdown, it was suggested, were cofactors such as poor nutrition, drug use, stress and depression.

On first hearing, this seemed a theory well worth considering, whatever challenges it might appear to pose to sexual freedoms and the progress of gay civil rights struggles. (At that time in New York, there were no civil liberties protections of any kind for GLBT people.) Promiscuity and STD rates were unquestionably out of control in cohorts of the gay community and chronic states of infection and infectiousness with Epstein Barr virus (EBV) and cytomegalovirus (CMV) were commonplace and known contributors to immune deficiency.

Even so, and even if they were only a minority of cases, there were some gay men who were getting sick who didn't seem to fit well into this paradigm. And what about the other major risk groups that were coming down with the new immune deficiency syndrome: Haitians, intravenous drug users and hemophiliacs? As conjectured by these theorists, the previously mentioned cofactors might be contributing in varying measures to comparable states of chronic infection in these groups, especially in environments of poverty.

Because of the vagueness of placing so much weight on "promiscuity" and other ill-defined "cofactors," because of the stretch involved in applying all this to the other risk groups, and because multifactorialism has historically been invoked to explain disease phenomena in the absence of better explanations, it was clear from the outset to a number of us in medicine and science that this was not a bandwagon we could jump on.

Condom use and safer sex options seemed good recommendations, but not the outspoken theory that was attached to them. At that point prior to the identification of HIV as the primary agent in AIDS, and taking our guidance from CDC, and with the evermore vociferous doubt being cast by the multifactorialists, we felt we still didn't have enough certainty about what we were seeing to make clear-cut recommendations even about condom use. In retrospect, we -- CDC, GMHC and I -- got that wrong. The promotion of condom use was definitely the right way to go, and Sonnabend, Callen and Berkowitz -- in sync with Larry Kramer on moving a lot more aggressively forward on prevention regardless of certainty -- deserve a lot of credit for promoting condom use as early and strongly as they did, whatever the theories.

Alas, the multifactorial theory of the cause of AIDS became increasingly defensive and intolerant of challenges well into the period of the establishment of HIV as the cause of AIDS. It would be different if this theory had been presented more clearly and consistently as one possibility among others, in the manner of good science and as Sonnabend, Callen and Berkowitz themselves did make fitful efforts to do -- e.g., the full title of their monograph was: "How To Have Sex in an Epidemic: One Approach."

Notwithstanding that "one approach" qualifier, there didn't seem to be much actual tolerance for the probability, and later the certainty, that a single agent was primary. That was my impression and that of many colleagues. Throughout those early years, the single-agent hypothesis was bullyingly derided by Sonnabend -- and with him, Callen and Berkowitz -- as the "killer virus" theory. Over time, as a number of us in mainstream medicine perceived it, the rhetoric espoused by multifactorialists grew evermore intransigent.

Historian Martin Duberman captures some of this atmosphere and dissonance in Hold Tight Gently: Michael Callen, Essex Hemphill and the Battlefield of AIDS:

"As panic mounted, so did internal squabbling. As usual in such circumstances, raging helplessness found its most available targets close at hand. Mike was far more sensitive to people, and more generous about their apprehensions and actions, than either Berkowitz or Sonnabend. Both of them, for example, disparaged Dr. Larry Mass. Berkowitz -- and Sonnabend still more so -- insisted that Mass, in Sonnabend's words, 'doesn't have the credentials to be writing in this area...It's a highly technical subject...He actually makes me angry.' When Mass told Sonnabend in one long discussion that 'there's so much epidemiological stuff for the single virus' theory, Sonnabend reported his own reaction as: 'Well, like what? And we waited and he had nothing to say. Just silence...his intellect [isn't] working...his intentions are good...he wants to help...he's not a bad man.' Mike told both Berkowitz and Sonnabend that they were being 'arrogant' and predicted that 'before it's all over [Mass will] be on our side.'" (from a series of mid-1982 to early 1983 transcripts of taped conversations, in various combinations)

Despite the good work each of these individuals did over time for safer sex, PWA empowerment and in support of research, that crossover to their theoretical viewpoint never happened. Once HIV was established as the cause of AIDS, a new designation emerged for those who remained unyielding on this issue of etiology: AIDS denialism. As many will remember, AIDS denialism was not a small, inconsequential movement. It became a cult phenomenon that overtook editors and writers of the gay press -- most notably New York Native editor Charles Ortleb.

As time passed, as the diagnosis and treatment of HIV became increasingly standardized, and under mounting criticism from mainstream medicine and science, Sonnabend began to moderate his publicly expressed views. Finally, in the 1990s, he began to endorse HIV as the primary agent in AIDS and began to explicitly distance himself from AIDS denialism and denialists, albeit without ever acknowledging the extent to which he had initially overreached in his earlier certainty of his theory of multifactorialism. Richard Berkowitz made a comparable retreat. In a film he made about his experience, Sex Positive, he acknowledged that he'd undergone successful treatment for HIV. Callen died from complications of AIDS in 93.

As Sonnabend began his slow, gradual, never complete withdrawal from his earlier insistence on the multifactorial cause of AIDS, others took up this theory, most notoriously Berkeley biologist Dr. Peter Duesberg. It's Duesberg's work, which Duesberg acknowledged was inspired by Sonnabend's theory, that became the basis for the infamous health care policies in South Africa that resulted in nearly a third of a million preventable deaths from the withholding of effective antiviral treatments.

Painstaking documentation of what happened in South Africa is the achievement of a remarkable 2 part (4 hour) 2006 documentary for PBS Frontline called The Age of AIDS. For additional perspective, see my Gay and Lesbian Review essay, "AIDS Denialism and African Genocide," written on the occasion of the 30th anniversary of AIDS. It's this essay, which notes the multifactorialism origins of what became AIDS denialism, that must have seemed accusatory to Sonnabend, although there, as here, Sonnabend's distancing of himself from denialism and denialists is acknowledged.

It's to their credit that neither Larry Kramer nor ACT UP ever got pulled into endorsing AIDS denialism, though neither did they take on the challenge of confronting it, even as the catastrophe in South Africa unfolded. Meanwhile, the history of AIDS denialism remains one of the biggest, most serious and least documented chapters in the history of AIDS.

Never again, one would think with real confidence. If it achieved nothing else, certainly the South African holocaust of 330,000 unnecessary deaths would sound the death knell for AIDS denialism. But a recent experience proved cautionary. I was speaking with my doctor, whose primary care practice is made up mostly of gay men, a number of them in treatment for HIV. I asked him if he still sees AIDS patients who are denialists and refuse antiviral treatment for HIV. "Yes," he said, "though they are fewer and further between than a decade ago." The last death of such a patient in his practice, he said, was several years ago.

In advance of seeing him for an annual checkup, I was having routine blood work done by a bright, friendly lab technician who was the first to tell me that morning's devastating news: that the Malaysian Airlines flight that was shot down over Ukraine had a number of leading AIDS researchers on board. I explained that I was a physician in addiction medicine and had worked with AIDS patients, mostly intravenous drug users, as well as with the GLBT community. We commiserated about the crash victims, and then she asked me if I believed HIV was the cause of AIDS.

Physician and Writer, Co-founder of Gay Men's Health Crisis and the first to write about AIDS for the press