India is in mourning. Dr. Abdul Kalam, former President of India, passed away on July 27, 2015. Among his many stellar accomplishments is his unmatched ability to inspire and ignite minds, especially of children and youth in India. He was popularly known as the people's President.

What made Dr. Kalam so uniquely special is perhaps best understood through stories from his life that he co-authored for children (with Dr. Arun Tiwari). The stories were produced by BookBox, a social enterprise that I co-founded to promote reading and language learning.

Dr. Kalam's stories can be seen in animated form on YouTube in English (and other languages):

As my homage to Dr. Kalam, I want to share a bit of the story behind the stories, when I first met Dr. Kalam to propose their production.

When Dr. Kalam's secretary ushered me into his office (at his residence), he immediately got up from his chair, took the effort to walk around the table to shake hands with me, with both hands. It is exactly what a person does in India as a form of respect when meeting someone higher in rank. He had turned the table on me.

I've met numerous bureaucrats and ministers and can speak for how they acknowledge your presence... "Yes, tell me?" while still looking at files to indicate how busy they are. And here was a former President willing to erase in a gracious gesture the all too obvious and enormous inequality between us.

I put forward my proposal to produce five books and animated stories from his life, for children. The word "children" worked like magic on him. He is reported to have dedicated his book "Ignited MInds" to Snehal Thakkar, a girl who, in one of his public lectures, responded to his question "Who is our enemy?" by saying, "Our enemy is poverty."

Dr. Kalam agreed readily to my BookBox proposal, maybe because it was for children but possibly also because I had approached him through his co-author for "Wings of Fire," Dr. Arun Tiwari.

Since Dr. Kalam had no hesitation in accepting my proposal, I ventured to ask him if he would also narrate the stories. He broke into a childlike laughter and said, "That is not a good idea! You get someone else to narrate."

Anyone who has heard Dr. Kalam speak will tell you that he could move his audience with his vision, passion, intellectual provocation, humor and simplicity. But they will also confirm that he had a high-pitched voice and thick accent that would be challenged to pass a routine audition for a drama part.

My thinking was that what we would gain from authenticity -- stories written and narrated by him -- would more than make up for any tonal issues in voice quality. I pressed him with this logic, even saying that we'll have two versions, but his 'no' was firm. 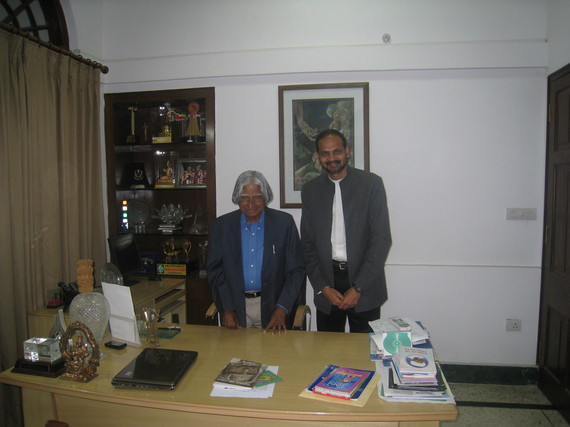 At the end of the meeting, I asked him for a photo with him and he obliged almost instantly by calling his secretary. Clearly, anyone who walks into his office can walk away with a photo, and inspiration for a lifetime!