When Media Matters posted the audio and story behind Dr. Laura Schlessinger's use of the "N" word, the Internet went into overdrive with comments, tweets and retweets, driving the story faster than the time it took for Dr. Laura to parody her way into the history books with a barrage of "N" word sarcasm on her radio show Aug. 10.

Dr. Laura's exchange with a listener created an opportunity for the famous radio expert on interpersonal relations to clearly demonstrate her understanding of cross-cultural communications. Instead, she exhibited a distant disconnect with African Americans akin to the reputations of fellow radio cohorts Rush Limbaugh and Glenn Beck.

Listen to Dr. Laura's response to a caller who identified herself as a Black woman offended by comments made by her White husband's friends:

Dr. Laura, here's a word of advice. Ironic, I know. Usually YOU'RE the one giving advice. But here goes: Let's bypass the fact that you cut off the explanation offered by your caller when you might have gained insight into why her feelings were hurt by what she considered racially demeaning remarks.

You chose to twist the woman's complaint about insensitive racial remarks into an unrelated political commentary aimed at reiterating your frustration toward some of President Obama's supporters. The caller turned the tables by offering you an opportunity to disclose your views regarding use of the "N" word. That's when you fell off your normally smart, pithy, advisory pedestal into a chasm of irrationality. Here's a bit of advice and insight. I hope this helps to start a much-needed conversation.

Don't Spit In My Face!

I don't use the "N" word. I'm offended by its use by anyone to anyone. It casts aspersions, dredges up and keeps alive a disdainful, disgraceful period in American history that spanned generations and seeks to demean and deride an entire group of people.

Here's the part of that history with which you may be already acquainted: Whites castigated Blacks using the "N" word. It wasn't enough to demoralize us in every way possible, including rapes, torture, murders and an overall subjugation through many generations. Even the legalized separation of Blacks from much of what you hold dear in the sacrosanct Constitution and Declaration of Independence didn't satisfy the insatiable violent urge to strip Black men, women and children of respect.

The "N" Word Is Degrading By Design 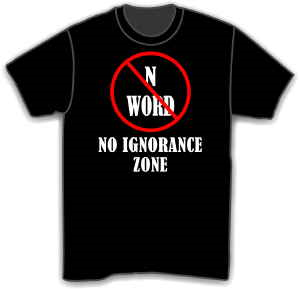 It wasn't enough for many Whites (not all) to praise God while holding a bible in one hand and waving Old Glory high in the other, all the while standing on the backs of Blacks and deriding them for not owning anything, failing to get jobs and living in slum-like conditions to which most were relegated by the foot on their backs.

It was truly the "N" word that drove home the spike in the heart of Black people. Whenever it was uttered by a White person, it was meant as yet another spit in the face, another piling on, another kick in the teeth ... to remind us that no matter what happens, Blacks will always be considered inferior to Whites.

No Altruistic Use of the "N" Word

The misguided notion that proclaims the historic meaning behind the "N" word can be turned about according to its use is akin to saying its OK for you and your girlfriends to call each other (pick your nastiest derogatory term used to demean women and insert here) but no one else is allowed to do so. Does that really change the meaning of the word ... or does it further demean and degrade you and your girlfriends in the eyes of those who subscribe to the historic and widespread understanding of the word?

Consider this, Dr. Laura: Would you be offended if radio hosts Sean Hannity and Don Imus spewed a barrage of the most vile vulgar term used to describe women in a demeaning way? Even without a historic context upon which to build, some words are designed to demean, degrade and injure. Would you be assuaged knowing that such a string of profanity was used merely in a sarcastic exercise to publicly display the colloquial use of the offensive term by some fringe groups among themselves?

I think you were trying to make that same point using sarcasm. But, Dr. Laura, you failed to understand THIS point: If White folks had called Black folks a$$holes$ for 300 years, it would NOT be OK for Blacks to give shout-outs to our "a$$hole homeboys" from any 'hood in the nation. It isn't OK for us to demean one another and most certainly NOT a feather in your cap for drumming the "N" word into the ears of your listeners to make a point.

Dr. Laura, the point you actually DID make is that you are very much out of touch with African Americans ... and likely a good portion of America as well (notice the demographic shifts occurring).

You did, however, apologize. That, my dear doctor, is a start. Incorporating education and repair of the damage you've done would be a nice follow through. I've heard you give such advice on numerous occasions. I trust you will now make such an effort.

And if you don't mind, could you grab fellow conservatives Rush Limbaugh, Sean Hannity and Glenn Beck by the hand and conduct a series of town halls to "Re-Discover America"? I would love to arrange such a tour on your behalf.

I look forward to hearing from you soon. We can get started right away by contacting the National Association of Black Journalists (NABJ). Just ask for me. Let's talk -- and get the whole nation talking with us.