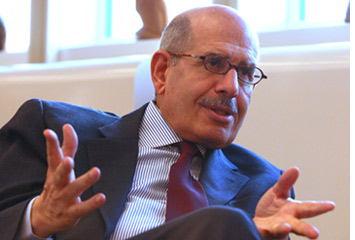 "In Egypt 40% of the population lives on less than $1 a day. 30% are illiterate. We are joining the list of Failed States. The country is deteriorating.... There is sometimes a culture of fear that holds us back. I keep telling people that we need to send a clear message to the current regimes that it is time for a change, that we need to break the culture of fear, that our strength is in our numbers if we work collectively."

Dr. Mohamed EdBaradei served as Director General of the UN's International Atomic Energy Agency (IAEA) from December 1997 to November 2009. Today he has returned to Egypt where he is working for democratic reform. His name has been circulated as a possible candidate to succeed President Hosni Mubarak in 2011.

In a two part interview with Mary Wald, Chairman of TheCommunity.com, Dr. ElBaradei says that Egypt, once the locomotive for change in the Middle East, is going backwards. In part 2 of the interview he talks about the view from the Muslim world and where the real nuclear threat lies.

To stay abreast please register at TheCommunity.com. If you would like to respond directly to Dr. ElBaradei please click here.

TCC: You seem to be the first voice we have heard addressing the need for reform in Egypt in a very long time. You are starting by asking for a more democratic and open election process.

Is the Arab world ready for democratic reform this quickly? Or is it your sense that this will be a decades long process for Egypt?

MEB: I don't think that any country is not ready. People are ready to enjoy the basic freedoms, freedom of speech, freedom of religion, freedom from want, freedom from fear and so on. People know that without democracy they are at a dead end.

You see this in Africa, in Ghana, in Botswana, excellent examples of democracy. People are ready.

The problem is how to get regimes to see it, to see that without democracy their country is stunted. In Egypt 40% of the population lives on less than $1 a day. 30% are illiterate. We are joining the list of Failed States. The country is deteriorating.

When people are repressed by their own governments, it leads to extremism.

It is not a question of whether change will come or not. No regime can ignore what is a clear message on the ground right now in the Arab world, that change is inevitable. Whether it comes in one year or five years, that train has already left the station. It will happen.

I think in the Arab world 90% of the people are supportive of change on both political and economic grounds, particularly the poor and the disenfranchised. The question is how to transfer that search for change into action.

If we work collectively it will happen more quickly.

TCC: It seems to me that you could have quite a comfortable life in Vienna, with a few very nice honors, including the Nobel Peace Prize, to rest on.

What has made you jump into this?

MEB: Yes, my family keeps asking me the same question.

When I completed my term at the agency some people asked me to lend a hand.

I had been watching over the last years how Egypt had been deteriorating. Egypt has in the past been a model for modernization, and moderation. We have been losing that. We are losing our role as a beacon of culture for the Arab world. In many areas our country has actually been going backward.

If I had to look at this and say I could have effected change and didn't do it, I would not have a clear conscience.

Looking at the region today makes you feel heartache. The Arab world is suffering. Someone needs to throw that first stone in the water and start the ripple.

To me, having a Nobel Peace Prize, it's not just a medal. It's a responsibility.

I want to say in the end that I gave it my all and lived up to that responsibility.

TCC: If you are successful, if you find yourself the next President of Egypt, what areas will you be looking at next for reform? And why?

MEB: I would say education as the first area. Then health, and basic needs, such as jobs. But primarily education.

Because we can transform Egypt into a modern state, and a moderate state, through education. With education you have access to the rest of the world. You have technology. You have development. You get exposed to the universal values we all have to live with, including tolerance, social solidarity and respect for diversity, It builds harmony.

Education gives you perception and understanding. Everything we look for in terms of a good life comes with education.

TCC: If Egypt were to open itself up for the kind of changes you are asking for, what effect could it have on the region?

MEB: It could have tremendous impact. Egypt was always looked at by the rest of our region as a locomotive for progress. it was in the past a trail blazer. And there are 80 million people here.

That's why there is a lot of support for reform in Egypt through the Arab world. It also makes some of the Arab regimes shiver a bit, as they see it coming as well in their own countries. And it will affect their countries.

MEB: It is true that the Muslim Brotherhood has a conservative view of religion. They also enjoy sizable degree of support in Egypt. They are currently the only effective opposition, with 20% of the Parliament. They provide many social services to the communities.

They have not used violence to achieve their ends for 40 or 50 years. They made it clear to me that they are not seeking a religious state but a civil state based on Islamic values (as it is currently the case under the Egyptian constitution) I made it clear however to them that a fundamental pre condition is the guarantee of equal rights to all Egyptians irrespective of their religion, ethnic origin etc.

I think that sometimes groups like these are painted in a way that is not a completely true picture. They are not the devil incarnate. I think sometimes the governments in the region try to paint these groups as more extremist than they are, to win the support of the West -- by saying You see? If you don't support us, the alternative will be much worse.

It's also true that the liberal parties have not been given much of a chance in Egypt, so in a sense the Muslim Brotherhood has been the only game in town. But if you want to effect change in a country like ours, you cannot simply ignore a group that has that kind of support. They must be brought into the process. Reform has to be inclusive and we have to have the brotherhood as part of the coalition but subject to a constitution that guarantees the protection of universal values and basic freedoms for each and every one.