Demilitarizing the police sounds wonderful, but what about the civilian stockpile?

Kentucky Senator Rand Paul was the subject of attention recently after he authored a rather sensible sounding editorial in Time magazine, entitled "We Must Demilitarize the Police." The piece focused on the excessive police response to protests in Ferguson, Missouri, which began after unarmed 18-year old Michael Brown, Jr. was shot at least six times and killed by Ferguson police officer Darren Wilson.

With a possible eye on a 2016 presidential bid, Paul made a rather overt effort to reach out to African-Americans in the editorial, saying, "If I had been told to get out of the street as a teenager, there would have been a distinct possibility that I might have smarted off. But I wouldn't have expected to be shot." 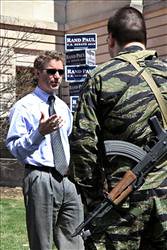 It didn't take him long to get to the point, however. "There is a systemic problem with today's law enforcement," Paul declared. "Not surprisingly, big government has been at the heart of the problem ... The militarization of our law enforcement is due to an unprecedented expansion of government power in this realm." The Senator then claimed that there is a "cartoonish imbalance between the equipment some police departments possess and the constituents they serve," citing a .50-caliber gun owned by Bossier Parish police in Louisiana as an example.

That's an odd choice of examples for the Senator given that he is the premier spokesman for a group, the National Association for Gun Rights (NAGR), that gives away free .50-caliber sniper rifles to civilians. These weapons remain legal on the civilian market because of politicians like Rand Paul, who voted against renewing the assault weapons ban in April 2013, just months after a troubled young man used an AR-15 equipped with 30-round magazines to massacre 20 children and six adults. Paul's position on guns is absolute. "I will not vote for any federal regulation of firearms," he has declared. "I don't think the federal government should be involved at all."

Senator Paul also hasn't been shy about spreading conspiracy theories and hatred against our government. One NAGR letter signed by Paul depicted a gun pointed at President Obama's head while urging readers to stop the president's (imaginary) "Million Rifle Ban."

And then there are Paul's friends in the militia movement. Senator Paul was the featured speaker at an Open Carry rally at the state capitol in Frankfurt, Kentucky on March 2010. Another speaker at that rally was Col. Terrell of the Ohio Valley Freedom Fighters militia (whose armed, camouflaged members guarded him as he spoke), who told those in attendance the following:

[The Patient Protection and Affordable Care Act], which is really about people control, the same thing as gun control, is the modern-day equivalent of the 1765 Stamp Act. It's only more disastrous to our freedom, living, way of life, etc. History, it seems is ready to repeat itself. After a long and costly civil war that is imminent and sure to be forced upon us, we are taking note of those who are responsible for the treason, and eventually they will be held accountable. I advise the press to start getting it right from this moment on, and stop aiding and abetting un-American activities. Like the Tories of old, the worst shall be hung.

A vision of civil war with bloodthirsty, gun-toting radicals doesn't make me feel safer. Does it make you feel safer? Bottom line: When Senator Paul tells us that police work is "an unquestionably difficult job, especially in the current circumstances," the man knows what he's talking about. Few politicians have done more to facilitate the transfer of military-style firearms to private hands and encourage anger against government than Rand Paul. That is what's driving the militarization of the police in the first place.

This threat is not hypothetical. Consider the cold-blooded murder of two police officers in Las Vegas in June. Jerad and Amanda Miller left their home in Indiana to stand guard at Cliven Bundy's Nevada ranch during the armed standoff there. The Millers reportedly shouted, "This is the start of a revolution!" just before gunning down officers Alyn Beck and Igor Soldo at a pizzeria.

It's unclear what Paul thought of the Millers, but he did comment on the man who inspired them. As Cliven Bundy and his followers pointed loaded firearms at federal and local law enforcement agents and threatened to kill them, Senator Paul voiced no criticism of them for these actions. Instead, he blamed the showdown on "government gone amok" and condemned Senate Majority Leader Harry Reid for calling those in the Bundy camp "domestic terrorists." 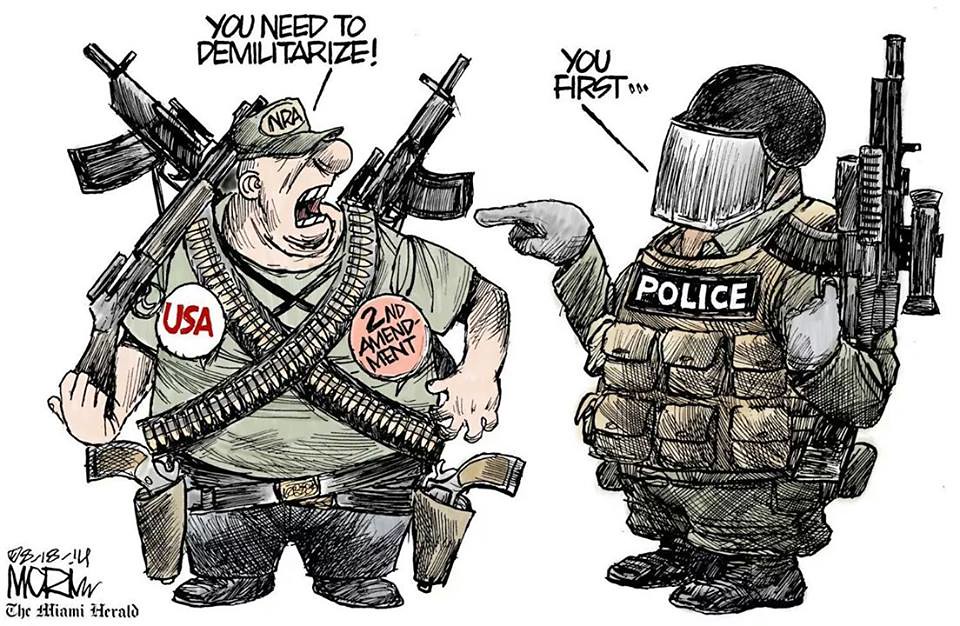 Summing up, as UCLA professor Adam Winkler so deftly pointed out, the problem of police militarization is "exacerbated by the fact that America has a heavily-armed civilian population." And we can't truly make our communities safer without addressing the proliferation of arms in both of these constituencies.

What would Rand Paul's vision of America look like? I hope we never find out, but there are certainly plenty of countries we can look to that have weak central governments and unchecked, heavily-armed private militias. Iraq, Somalia, Ukraine, etc. How are they doing in terms of keeping citizens safe? I think any objective observer understands that this volatile mix of elements leads to more violence, not less.

Our Founders, to their credit, understood this, and feared anarchy as much as they feared governmental abuse of power (tyranny). It was for this reason that they defined the capital crime of treason in the Constitution and made it clear that the role of the Militia was to "suppress Insurrections," not to foment them. Their great social experiment in governance was no accident. Our Constitution intentionally strengthened the federal government because our Founders believed that was the best way to ensure individual liberty. They had no intention of disarming government and arming everyone else to the teeth.

Rand Paul, unfortunately, does. And well-intentioned lawmakers should be conscious of that fact when they sit down with him to discuss important legislation to demilitarize our police forces. The goal of reducing violence in our communities is noble, but any effort that ignores the very real fears that modern-day police experience in confronting a well-armed citizenry is doomed to failure. A truly honest effort in this area would address both the police and civilian constituencies, and de-escalate an arms race that has been going on for far too long -- to the benefit of only the gun industry.