Television talk show host Dr. Phil McGraw sparked outrage on Twitter Tuesday, and prompted the creation of a Change.org petition after posting a controversial tweet about women consenting to sex while intoxicated.

McGraw, who often questions his Twitter followers about themes for upcoming shows, asked if it was "OK" to have sex with a girl when she's drunk: 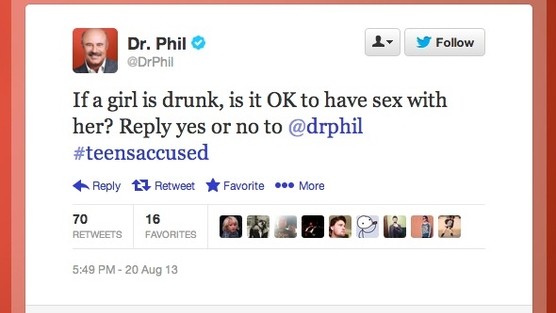 Though the tweet has since been removed from his page, it was up long enough to prompt a great deal of criticism on Twitter.

Dr Oz was saving lives today and Dr. Phil is trying to hook up with drunk girls where is @oprah she needs to have an emergency team meeting

If Dr. Phil is drunk is it okay for him to tweet?

If a person is a misogynist, is it OK to just refer to him as "Dr. Phil" from now on? #DrPhilQuestions

Carmen Rios, a former college sexual assault activist, started the Change.org petition encouraging supporters to call on McGraw to host a show to educate his viewers on assault prevention:

Even though he took the tweet down, Dr. Phil should of course admit his error in judgement. But he needs to go a step further. I am asking Dr. Phil to produce a show that shines a light on survivors of rape and sexual assault and begin a national conversation about the specifics of consent – which includes not raping people while they are drunk or otherwise unable to consent.

The many people who have survived rape -- not committed -- are the ones who should have a national platform to discuss how we as a society can make sure tragedies like Steubenville never happen again.

The petition had more than 350 supporters on Tuesday evening.