Titled What Pet Should I Get?, Seuss' book will be released in July and stars the same brother and sister duo from his 1960 classic One Fish Two Fish Red Fish Blue Fish. This time, the children are deciding on a pet based on its looks -- and how easily its name rhymes.

Seuss' widow, Audrey Geisel, originally found the materials for the book in 1991. She re-discovered them in 2013, at which point she handed them over to Random House, his longtime publisher. 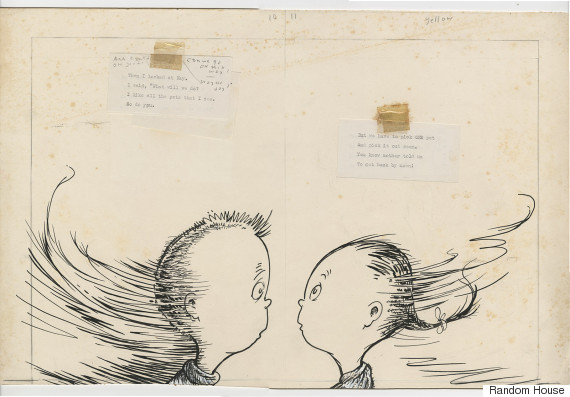 Inside the What Pet Should I Get? manuscript.

“While undeniably special, it is not surprising to me that we found this because Ted always worked on multiple projects and started new things all the time -- he was constantly writing and drawing and coming up with ideas for new stories,” Geisel said in a press release. “It is especially heartwarming for me as this year also marks twenty-five years since the publication of the last book of Ted’s career, Oh, the Places You’ll Go!"

As for when Seuss actually wrote What Pet Should I Get?, his former art director Cathy Goldsmith believes it was some point between 1958 and 1962, roughly the same time as One Fish Two Fish Red Fish Blue Fish. She'll oversee the editorial and creative process of prepping the new book for publication.

“My connection to Ted remains as vital as it was when we worked closely together years ago," she said in the press release. "I know he is looking down, watching over the process, and I feel a tremendous responsibility to do everything just as he would have done himself.”

When reached for comment, Random House spokeswoman Lydia Finn said, "We are so excited about it!"