Most people know the author Theodor Seuss Geisel by his pen name, Dr. Seuss. And most folks who know Dr. Seuss are well acquainted with his children's books -- 46 time-honored classics, which, despite their fantastical illustrations and imaginative situations, often carried poignant social messages.

But while Dr. Seuss may be best known for works like The Cat in the Hat and Green Eggs and Ham, he was also a prolific political cartoonist during World War II. Penning editorial cartoons for the left-leaning New York newspaper PM from 1941 to 1943, Dr. Seuss covered the war from a unique angle that presented progressive opinions ornamented with entertaining flights of fancy.

According to the 1995 biography, Dr. Seuss & Mr. Geisel, Dr. Seuss "was haunted by the war in Europe." While he supported the war effort through his work, he also used his cartoons to convey social messages, fighting against racism and anti-semitism.

The Mandeville Special Collections Library at the University of California, San Diego houses the original newspaper clippings of more than 400 cartoons that Dr. Seuss drew for PM, plus a series of war bonds advertisements that appeared in other publications.

While in-person viewing requires special permission due to the fragility of the documents, the entire gallery is available on the Dr. Seuss Collection website.

As i09 pointed out, "one does not expect to see the whimsical style of Dr. Seuss applied to real wartime figures," but the cartoons are as important a part of the author's oeuvre as his socially progressive works like The Lorax and The Butter Battle Book.

It wasn't uncommon for illustrators to align themselves with the war effort during the 1940s. In fact, this era, often called the Golden Age of comics, with its clearly drawn lines between "good" and "evil," helped define and give rise to the concept of the superhero.

While Dr. Seuss' political caricatures show some vestiges of the age -- his unflattering portrayal of Japan's Emperor Hirohito among them -- his progressive attitudes are sprinkled among the propaganda. 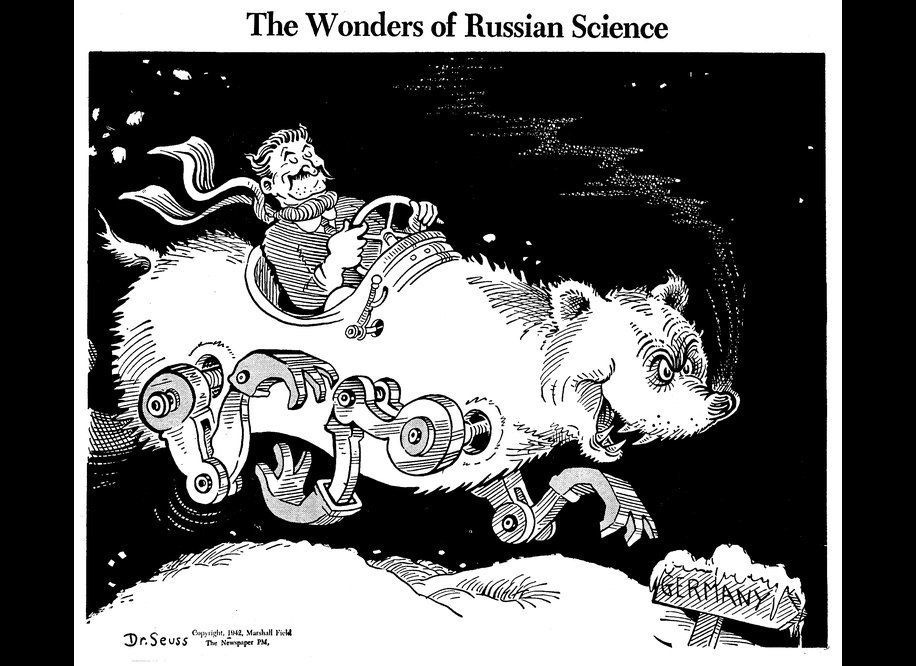