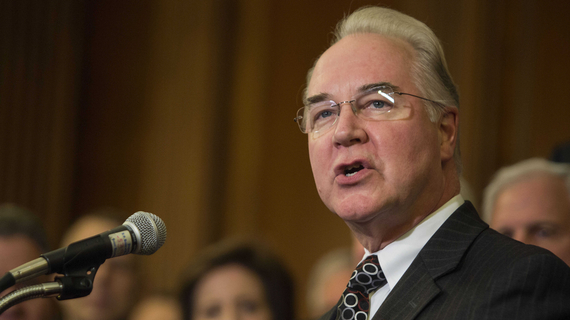 There has been a lot of talk about Obamacare (AKA the Affordable Care Act) potentially being repealed and replaced under President Trump. However, in order for that to be done properly, there must be somebody in charge of Health and Human Services who has quality solutions and the impeccable knowledge of healthcare it will take to muster a great replacement plan.

Thankfully, Tom Price fits both of those categories.

The original bill is nearly 2,000 pages and has far too many landmines within it. Dr. Price knows that the replacement bill must be simpler and scrap the worst parts of the law that are driving up cost and driving down care.

I understand that the mission of Obamacare was to deliver affordable health insurance, but with the recent announcement that premiums will be rising 22%, it is clear that despite the best of intentions, the law may have helped some people, but it has driven up costs for many others.

As a doctor myself, I very much value both quality of care and the sanctity of the doctor-patient relationship. I believe that the government should interfere minimally and market-driven ideas must be at the forefront. Despite some claiming that Republicans have not offered any alternatives, there have been several replacement plans have been in existence for several years that rely on the principles I spoke of in the previous paragraph.

One such plan is Dr. Price's long-standing alternative, the "Empowering Patients First Act," which shows he has a clear understanding of how to repeal and replace the existing healthcare law. He believes in fixed tax credits, starting at $1,200 per year and increasing with age, which would allow people to have greater control and use that money towards any plan they saw fit (this goes for Medicaid, Medicare, and VA recipients as well, as they would have the option to opt out and receive these credits if they chose to do so).

Health savings accounts - a terrific idea going all the way back to the Gingrich-led congress of 1994 - feature prominently into his plan. These are a great way for people to save medical money over the long term so that they can build a substantial sum in their accounts for when they are older and have a greater need for the money to pay for increased medical bills that typically accompany old age.

But Price also realizes that safeguards for our most vulnerable need to be included, too, so he has provisions in his plan to keep people from being denied insurance for having pre-existing conditions as well as funding mechanisms to help pay for high-risk state pools that can assist the truly poor and sick from being unable to get the care they need. Those are all excellent ideas and would be a significant step in the right direction.

However, Paul Ryan and others - including Democrats - have thoughts about what else could be added to make Price's plan even better and like any wise person, he has said repeatedly he will listen to ANYTHING that could potentially add value for the American people.

Costs need to come down without the high quality of doctors and hospitals we have become so accustomed to in this country being adversely affected.

Dr. Tom Price knows this and he is on the case. As a fellow doctor, he has my complete faith, and I have the utmost confidence that he will succeed.