Fans of the long running FOX series, Bones, are rejoicing over the news that much beloved character, Dr. Zack Addy, played by actor Eric Millegan, will return for the show's twelfth and final season. His surprise appearance in the Season 11 finale as Dr. Brennan's (Emily Deschanel) kidnapper gave rise to a million questions - all to be answered in good time when Bones resumes on January 3rd, 2017. Millegan, who began on Bones in 2005, answered a few of our burning questions about Dr. Addy, running the New York City marathon, and his impressive career in musical theatre.

Xaque Gruber. You've been playing Zack Addy on Bones since its first season, how this complex, dark character, and growing with him over eleven years, changed you?

Eric Millegan: I've aged a lot with the character. I was 30 and looked near 19 when I started the show. Now I'm 42 and look it. I've learned a lot about acting and I've grown with my fellow actors on the show. When we were shooting Season 12, we brought a lot of history to the work. We've been through a lot together. Yes, Zack has been very complex and dark, but I like that. It gives me something fun to play.

XG: The character of FBI psychologist, Dr. Lance Sweets (John Daley), believed Zack Addy was not actually crazy, and yet he has been in a mental institution. Do you believe that Zack is mentally ill or just a misunderstood genius?

EM: Zack is not mentally ill. And yes he's a genius. One thing just led to another for him. He didn't snap all at once. He just made a mistake and had to pay a price for it.

XG: Many Bones viewers may not realize that prior to the show, your resume was largely comprised of musical theatre performances. How did your musical theatre background help you as an actor on the show? Was that transition a challenging one?

EM: Working on TV and musical theater are very similar to me in that we're telling a story and you're responsible for your part of that. The medium is different and you use different skills, sure, but the goal is the same. I haven't done musical theater in a long time and I would like to so it will be interesting to see what it will be like to return to that after over a decade on TV.

XG: You recently performed a cabaret show in New York City with a portion of the proceeds going to the Actors Fund. For fans who missed your live show, are there other shows on the horizon? And how the heck did you run the New York Marathon the morning after your cabaret show?

EM: I do my cabaret show at Don't Tell Mama in NYC for one night every four years so look for me in 2020. The marathon was difficult. I think I bit off more than I could chew. I was exhausted after nine miles, so the final 17.2 were incredibly challenging. I'm not going to run the marathon next year. I need a break from that.

And now for some "lightning round questions" with Eric...

2. Top 3 favorite theaters in the country (outside of NYC) where you have performed: Paper Mill Playhouse (Millburn, NJ), Hult Center (Eugene, OR), and the Palace Theatre in Myrtle Beach, SC.

3. You moved to L.A. when you started on Bones. What is the most L.A. thing about you?: I love driving. Love listening to podcasts and the radio.

4. If Zack Addy were a real person, what musical theatre shows would he enjoy?: Urinetown, Little Shop of Horrors, Sweeney Todd.

5. What (non-musical theatre) songs are your karaoke jams?: Somewhere Down the Road Michael Masser, Tom Snow, and my friend Cynthia Weil. 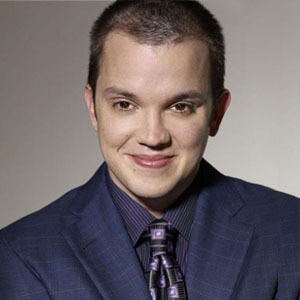 For more information about Bones and Dr. Zack Addy, check out: http://www.fox.com/bones