The ancient creature, which was found 50 years ago in southern Africa but drew relatively little attention until now, may shed light on the evolution of the major group of dinosaurs that included famous giants such as Stegosaurus and Triceratops.

The 200-million-year-old dinosaur "was two-legged, probably fleet-footed, and had grasping hands," said researcher Paul Sereno, a paleontologist at the University of Chicago.

Named Pegomastax africanus, or "thick jaw from Africa," it was less than 2 feet (0.6 meters) long and weighed less than a house cat at 15 pounds (6.8 kilograms) at most, "and was mostly tail and neck," Sereno added. 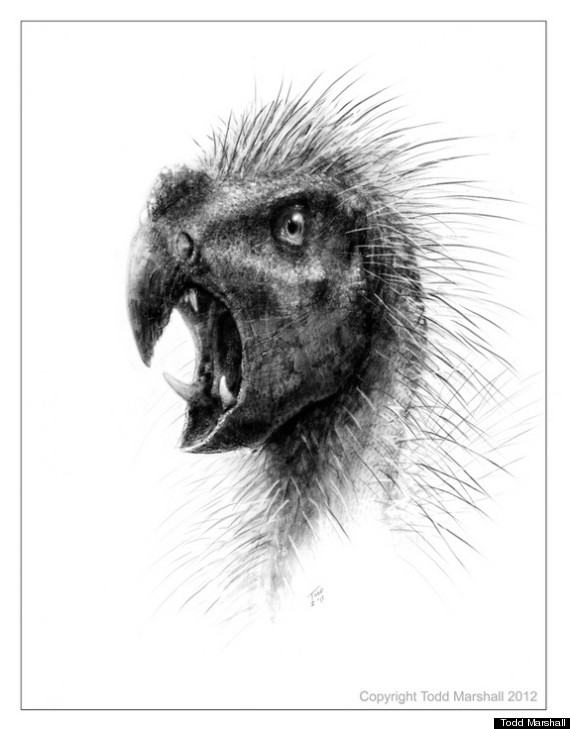 Strangely, bristles somewhat like porcupine quills may have spread across most of the body of Pegomastax. Such bristles first appeared in a relative named Tianyulong recently discovered in China. Buried in lake sediments and covered by volcanic ash, Tianyulong was preserved with hundreds of bristles covering its body from its neck to the tip of its tail. [Paleo-Art: Stunning Illustrations of Dinosaurs]

"It would have looked a bit like a two-legged porcupine, covered in these weird, funky, quill-like things," Sereno said of Pegomastax. "The bristles were not quite as strong as a porcupine's, and they don't look as if they were especially effective for insulation. Perhaps they had colors and helped differentiate species, or made Pegomastaxlook bigger than it actually was to potential predators."

Extending from its parrot-beaked skull, which was less than 2 inches (5 centimeters) long, were serrated canines a half-inch (0.8 cm) long from both its upper and lower jaws.

"It would have looked like Dracula," Sereno told LiveScience. "Probably appropriate, since we're now moving toward Halloween."

The dinosaur was originally chipped out of red rock near the border of Lesotho and South Africa by Harvard researchers in the 1960s. Sereno recently came across it while going through Harvard archives.

"I was just amazed," Sereno recalled.

Although the long stabbing fangs might hint that Pegomastax was a predator, its parrotlike beak instead suggests it ate seeds and nuts, or maybe plucked fruit. When the jaws closed, the fangs slid into sockets in the opposing jaws instead of sliding past one another for the optimized cutting or gripping expected of a carnivore.

"The canines probably had nothing to do with meat-eating," Sereno said. "They may have been used to spite rivals, nip at others, defend themselves, maybe root around for food."

Tall teeth in the back of the jaw probably helped slice plants, with surfaces that slid past one another when the jaws closed, operating like self-sharpening scissors. "Pegomastax and kin were the most advanced plant-eaters of their day," Sereno said.

Pegomastax belonged to one of two major divisions of dinosaurs, the "bird-hipped" ornithischians, which included armored ankylosaurs, bony-plated stegosaurs, duck-billed hadrosaurs and horned, frilled ceratopsians such as Triceratops. Ironically, birds themselves belong to the other major group of dinosaurs, the "lizard-hipped" saurischians, which included the carnivorous theropods such as Tyrannosaurusand the long-necked herbivorous sauropods such as Diplodocus.

When Pegomastax was alive, the supercontinent Pangaea had just begun to split into northern and southern land masses. Pegomastax appears to lie near the base of the family tree of the ornithischians, and as such could shed light on the evolution of this major group, Sereno said.

The scientists detailed their findings online today (Oct. 3) in the journal ZooKeys and on the website of the National Geographic Society.