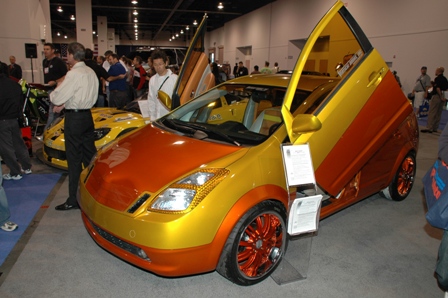 The Specialty Equipment Market Association is a collection of after-market builders – they fill up the auto part stores with every thing from car mats and beaded seat covers to carburetors and new engines.

For the most part, according to Peter MacGillivray, a SEMA VP, they are small businesses. For the die hard enthusiast, SEMA helps introduce new body kits, outrageous wheels and super high powered cars -- 1,000 horsepower is nothing new on the SEMA floor.

But can these fuel sucking monster engines help create a cleaner world? Abso-green-lutely.

While some conservation groups think they understand cars, most fall flat in figuring out how to change a low rolling resistant tire, much less the inner workings of the internal combustion engine.

In order the change the world, it’s going to take people that know their way around a tool box -- not a group of people who think fixing a car requires a mechanic on speed dial. And SEMA is chock full of people who have the know how and the business savvy to do it. 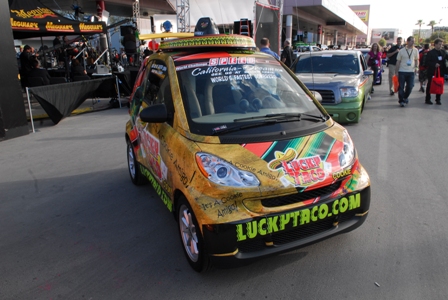 Sure, these guys know how to go fast, that's in their DNA. But now, more efficient has become a passion for many wrench turners -- and it’s the lessons learned in racing that is helping many car-makers figure out how to go farther on less fuel.

No one bats an eye when a manufacturer talks about the carbon fiber hood or aluminum rear door anymore. It's as common as low-rolling resistant tires.

Aerodynamics, a key factor for more efficient car, is continually improved, in part because the things learned in racing has been passed along to mainstream vehicle lines. Body kits that were once designed to make a car look cool, can now be built to make a car slippery through the wind.

SEMA has added a Green forum to the show, where industry experts will talk about other ways to get better fuel economy. These are the companies that are figuring out ways to make better diesel filtering kits, more efficient bio fuels, cleaner gasoline engines and lighter materials.

An important point that MacGillivray told me last week was that these small companies have the ability to adjust to new technologies much faster than lumbering carmakers. Radios, seat belts and air bags were all after-market features first, why wouldn’t a 100 mpg engine also be one?

“SEMA hopes to really act as an incubator,” MacGillivray said, “to explore ways to be part of that future technology.”

No doubt it will be. And even if one of these companies offers a big break through that eventually makes it onto every car in the world, no one will completely lose their “go fast” DNA.

See, another secret about the electric cars few people car to mention is they can be made to go extremely fast. The instant torque and lack of gears makes them perfect for efficient driving -- and racing.