By Steven Kelly, contributor at The International Political Economy Hub.

European government bond markets saw yields rise last week as the eurozone's monetary policy committee decided not to extend or expand its current stimulus program (yet, anyways). Discourse about central banks has again started to focus on whether or not monetary policy has hit its limits. Eight years on from the financial crisis, economic woes are still widespread in the developed world. Since the crisis, central banks have continuously revised their growth and inflation forecasts downward and expanded their quantitative easing (QE) stimulus programs or postponed the programs' end-dates.

The rhetoric around central banks now mainly centers on central banks being "out of ammunition" or the associated loss of central banks' credibility. Certainly, failing to yet revitalize economies, continually adjusting their forecasts downward and extending their own deadlines, and facing asset scarcity in the markets in which they execute their stimulus programs have left central banks in the developed world with deteriorating credibility. However, central banks are not out of options, nor do the credibility reductions need to be permanent. The European Central Bank (ECB) and others should be focusing their stimulus efforts on large-scale and broad-based equity purchases.

Yields on corporate and sovereign debt have fallen to record lows as safe asset demand has risen and central banks have intervened directly in these markets to reduce interest costs. While yields on debt-financing have fallen substantially, debt only represents one side of firms' financing costs. Firms are also beholden to their owners, and thus, the return required on equity is also a factor in financing costs. While the debt cost component of firms' so-called "WACC" or weighted-average cost of capital has fallen, rising risk premiums have increased the cost of equity substantially since the crisis (see figure). 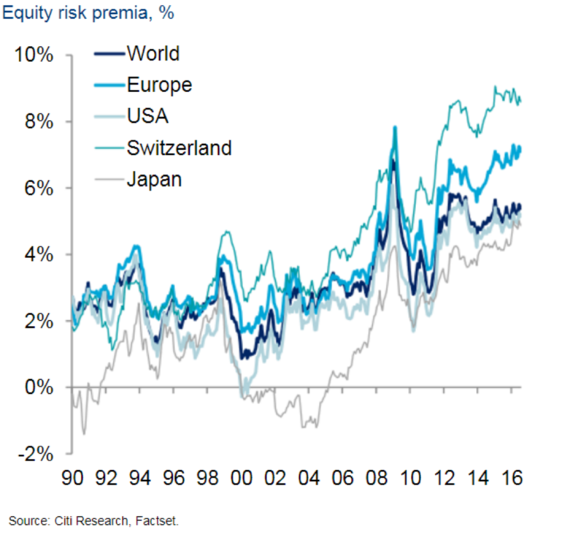 This speaks to a number factors that central banks can offset with equity purchases. Firstly, a central bank is a potentially-unlimited long investor. Aside from boosting share prices (and reducing the required return on equity) directly via its purchases, a broad-based equity-buying program from the central bank would essentially offer private investors a massive put option on the market as a whole. This put option would be especially valuable as central banks have seen their emergency lending power limited, stigmatized, and, in the ECB's case, made procyclical by regulations or political pressure.

The benefits don't stop there; central banks will receive a big boost to their credibility through several channels, which can be self-reinforcing and support the economy in itself. While the reduction in risk premiums and increased investment will boost central bank efficacy, an equity-purchase program also adds credibility to other central bank stimulus tools.

Purchasing equities, the prices of which tend to move inversely to those of government bonds, means that a large balance sheet does not pose as much of a risk of capital losses for central banks. Given the sheer size of central banks' current balance sheets across the developed world, there is concern that central banks would need to be bailed out by their respective Treasuries if they did not sell off their long-term government debt before raising rates as they would face capital losses. This is has been part of the reason that since QE began, central bankers have consistently advertised that they will again "normalize" their balance sheets by reducing them back to pre-crisis size. This talk, while possibly needed to maintain the credibility of central bank solvency, has limited the effectiveness of QE by consistently warning of its impending removal. A diversified central bank portfolio that includes equities would bring steady returns even in an environment in which bond prices are declining. This would also allow for the QE-induced increase in bank reserves to achieve a greater degree of (if not complete) permanence and thus spur inflation sooner and increase the price level, helping to keep nominal GDP near or on trend. In this way, by purchasing equities, central banks would improve the effectiveness of their bond purchases as they would not need to continually discuss reversal of the these purchases to maintain credibility.

Directing stimulus money to equities would have a much greater effect on economic activity and central bank effectiveness than any expansion of current bond-buying programs. A large-scale, broad-based equity purchase program should be central bankers' next step in regions where it is already legal, and they should be making the case for it to lawmakers in regions in which it isn't yet. Until then, the world economy will remain in era coming to be known as "the new mediocre."