2014 marks a morbid 70th anniversary. It was in 1944 that U.S. Food and Drug Administration (FDA) toxicologist Dr. John Henry Draize invented the now-infamous "Draize test" to evaluate the safety of cosmetics and other personal care products using live animals. 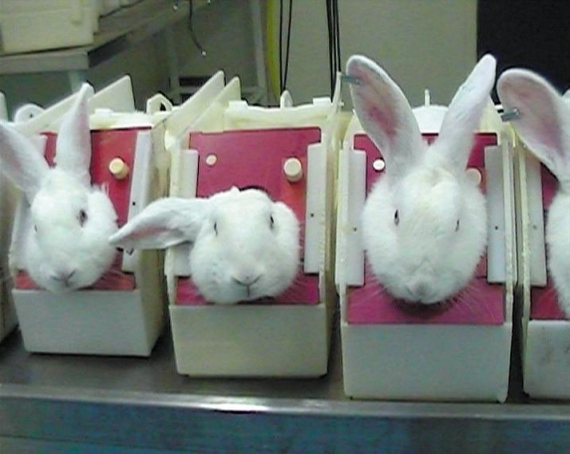 In the eye version of the test, rabbits are placed in restraining stocks so that they cannot struggle or wipe their eyes. Their eyelids are pulled apart, and the substance is dripped, sprayed or rubbed onto the eye. The eyelids are then held together for a moment to ensure that the substance is all over the eye. The rabbits are then observed in order to determine whether or not irritation occurs over the next three days. They are usually monitored for a further three weeks before being either killed or, if there is no permanent damage to the eye, reused after a "wash-out" period that removes traces of the previously tested product. It's hard to say which fate is better.

In the similarly horrific skin test, test substances are typically rubbed onto the shaved backs of rabbits to check for the severity of the reaction over a period of two weeks, before they are killed or "washed out" and reused.

It's worth noting that if someone were to do such things to an animal outside a laboratory, it would be considered cruelty to animals -- a felony offense in many states. But these tests are still perfectly legal the United States when conducted by testing facilities in order to bring a new eye shadow or cologne to market.

When the tests were first concocted by Draize in 1944, product testing was in its infancy. One would think that if these draconian tests are still legal to use today, then they must be the only tests available, or that they must be extremely accurate.

But they are neither.

The FDA's own investigators have concluded that that the Draize test is "plagued" by a lack of reproducibility, and that there lacks a clear relationship between rabbit and human eye responses. Furthermore, studies comparing hundreds of instances of accidental human eye exposure to assorted household products with Draize rabbit eye test data for the same products have found little or no predictive value for the rabbit test.

Likely reasons for the lack of correlation is that the structures of human and rabbit eyes are quite different. For example, the cornea accounts for 25 percent of the surface area of a rabbit's eye, in contrast to 7 percent of the human eye. The human cornea is also thicker.

The Draize skin test doesn't fare much better. This is because the anatomy and cellular makeup of skin varies among different species; therefore, responses to products vary between the species. Indeed, the rabbit is now considered a notoriously poor predictor of human irritation potential.

In short, humans are not rabbits.

Science advances rapidly, and, as one would expect, since 1944 there have been many improvements in determining product safety. The information that has historically been gained from animal tests has increasingly been replaced with quicker, cheaper and more reliable non-animal methods.

Research to replace the Draize tests started in the 1980s, and in 2009 two alternative methods for assessing eye irritation were accepted by the Organization for Economic Cooperation and Development (OECD), the international body responsible for producing and validating international test guidelines. Replacements for the skin irritation test using small discs of human skin cells grown in laboratories have also been accepted and validated by the OECD. When developing a new product, companies can use these validated and scientifically proven alternatives in lieu of the now-antiquated Draize tests. In addition, manufacturers can use established ingredients for which safety data is already available.

Hundreds of "Leaping Bunny"-certified cruelty-free companies have proven that it is possible to make safe and quality cosmetic products without testing on animals. Moreover, governments around the world are increasingly prohibiting the use of animals for cosmetics testing. In March 2013 the European Union not only completely banned animal testing for cosmetics but also banned the sale of any new cosmetics tested on animals anywhere in the world. Other countries are also modernizing. India and Israel have banned all animal testing for cosmetics and Korea, and ASEAN are also moving toward a ban.

It's high time that the United States -- the country that birthed the infamous Draize tests -- catch up with the rest of the world and put the misery out of these tests once and for all.