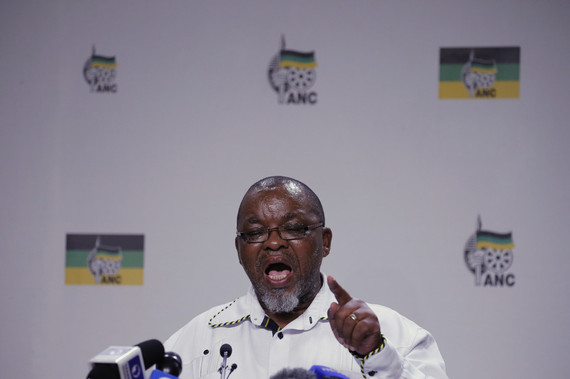 South African President Jacob Zuma apologized to his country on national television just before 8 in the evening after a dramatic 36 hours that ended with him hanging onto power by a thread.

The day before his televised apology the country's highest court, the Constitutional Court, ruled that Zuma had failed to "uphold, defend, respect" the Constitution. The court found that he had done this by refusing to accept that he should pay back a portion of the public money that was spent on security upgrades to his private homestead, Nkandla.

The judgment was widely, and rightly, celebrated as a victory for constitutional democracy and the Public Protector - South Africa's ombud, established by the Constitution that was signed into law by then-President Nelson Mandela, 20 years ago.

The Public Protector, Thuli Madonsela's report, "Secure in Comfort", was published in March 2014. For the best part of two years Zuma resisted accepting the "remedial action". The Constitutional Court this week ruled that this remedial action was binding on him. He also used his party's majority in the National Assembly to further filibuster and obfuscate - earning the national parliament a similarly sharp rebuke from the Constitutional Court.

In another, earlier case involving a challenge to the Public Protector's powers by the South African Broadcasting Corporation's Chief Operating Officer Hlaudi Motsoneng, the Western Cape High Court ruled that Madonsela's powers were not binding like a court order. But, the court found, any "remedial action" that she ordered should be taken by the government unless there was a rational reason not to.

When the decision was appealed, the Supreme Court of Appeal later adjusted this legal test to the one that the Constitutional Court confirmed on Thursday - namely that the power of the Public Protector to "take remedial action" is binding unless successfully challenged by way of judicial review.

Zuma and his lawyers are adept at using the courts as a delaying tactic. The challenge to the decision to drop corruption charges against him shortly before he came to power in 2009 has dragged along at a snail's pace thanks to his various procedural challenges. A decision of the North Gauteng High Court is now pending, the matter having finally been heard in March 2016.

In his television address Zuma took refuge behind the legal advice that he claimed had informed his original approach, citing the Western Cape High Court decision. This can only be described as an outrageously brazen and disingenuous ex post facto re-framing of the history of the matter.

It will not fool many.

Zuma is fighting desperately for his political life, staggering from one scandal or misjudgement to another. An hour after his live broadcast, Gwede Mantashe, the secretary-general of Zuma's own party, the African National Congress, held his own press conference. He stated, several times, that the party does not "pivot" around any one leader. Mantashe said that the ANC welcomed the fact that Zuma had "humbled" himself before the nation.

As the ANC's chief "traffic warden" and kingmaker, Mantashe is now the man who holds the key to Zuma's future.

To the uninitiated it may have looked like Mantashe and the ANC were pulling up the drawbridge in defence of Zuma, as he counter-attacked against opposition calls for Zuma to be impeached or removed by his own party. He told the media:

We will not play to the gallery.

But to more seasoned political watchers it was clear that Mantashe's strategy of containing Zuma is gathering momentum and gaining traction. Tellingly, Mantashe announced that the ANC will shortly be holding an "extended" meeting of its national working committee.

This is a powerful sub-committee of the ruling party's National Executive Committee - which is the only body that can "recall" Zuma, as it did in the case of former President Thabo Mbeki in September 2008.

An "extended" national working committee means that any other member of the national executive committee may attend. Who turns up may matter a great deal to Zuma's future. He may still enjoy a majority of support on the national executive committee that was elected when he was re-elected as President of the ANC at its last national conference in December 2012. But that support is now on the wane. More recently the moderates and social democratic traditionalists in the ANC leadership have begun to find their voice in opposition to Zuma's destabilising rule.

The national working committee is also due to meet with the ANC's parliamentary caucus. Until now they have used their majority of 63% of the seats in the National Assembly to vote down several motions of no confidence brought by the chief opposition party, the Democratic Alliance.

Parliament is in recess, so the decision to recall its parliamentary caucus suggests that events are moving fast within the ANC. This raises the question: if there is no crisis, then why all these meetings?

For the time being at least, Zuma is not ready to relinquish power. With the ruling on the lawfulness of the decision to drop the corruption charges against him looming he still has too much to lose by giving up the Presidency.

But Zuma is in the middle of a long and difficult week and perhaps sooner rather than later he may have to face the inevitable.